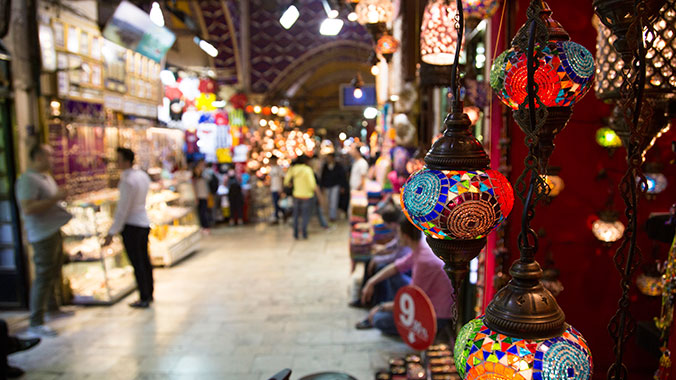 Wishlist Share Start
Istanbul is thousands of years old, so it deserves a few extra days of exploration. Continue your discovery of this complex and mysterious city with our local experts.
Not yet reviewed
Activity Level

Delve deeper into the ancient and contemporary cultures of Turkey. From the Istanbul Archaeology Museum and the lavish Dolmabahce Palace to Istanbul’s Modern Art Museum and bustling squares — experts immerse you in the real Istanbul, bringing to life the city’s heritage of cultural fusion.

To take this extension, enroll in this main program first.

The Best of Turkey: A Journey by Land and Gulet

Go off the beaten path as you explore the Turkey seldom seen by tourists. From a private Sufi and Zikr ritual to expert-led walks and sailing excursions, this adventure has it all.
Activity Level
Keep the Pace
Walking up to one mile daily over varied terrain.

Activity note: Walking up to 1 mile on cobblestone streets

Morning: This morning, after breakfast, you will first visit the Dolmabahce Palace, the second palace of the Ottoman Sultans built in mid-19th century. Visiting this Palace will provide a better insight to the socio-economic and cultural changes that the Ottoman Empire was going through in 19th century. Dolmabahçe Palace was ordered by the Empire's 31st Sultan, Abdülmecid I, and built between the years 1843 and 1856. The construction cost five million Ottoman gold coins, 35 tons of gold, the equivalent of $1.5 billion USD in today's values. Fourteen tons of gold in the form of gold leaf were used to gild the ceilings. The design contains eclectic elements from the Baroque, Rococo and Neoclassical styles, blended with traditional Ottoman architecture to create a new synthesis. The palace layout and décor reflect the increasing influence of European styles and standards on Ottoman culture and art during the Tanzimat period. Previously, the Sultan and his family had lived at the Topkapi Palace, but as Topkapi was lacking in up-to-date luxury and style, Abdülmecid decided to build the Dolmabahçe Palace on the Bosporus. Whereas the Topkapi has exquisite examples of Iznik tiles and Ottoman carving, the Dolmabahce palace contains much gold and crystal. The sultans lived here from 1856 to 1922. With its columns and pediments, the opulent palace has a very European appearance, and the interior is a mid-Victorian statement in over-the-top luxury.

Lunch: Lunch at a local restaurant in Ortakoy.

Afternoon: After visiting the Palace, you will drive to Ortakoy, a charming district on the Bosphorus frequented by young people and artists. After strolling through this colorful seaside district, drive to the Galata Tower, to catch a glimpse of the old city from the top of this 14th century tower. The tower was built as the Tower of Christ in 1348 during an expansion of the Genoese colony in Constantinople. The Galata Tower was the tallest building in Istanbul at 219½ feet when it was built in 1348. According to the Ottoman historian and traveler Evliya Çelebi, in circa 1630-1632, Hezarfen Ahmet Çelebi flew as an early intercontinental aviator using artificial wings for gliding from this tower over the Bosphorus to the slopes of Uskudar on the Anatolian side, nearly 3 miles away. Rest of the day free on your own.

Activity note: Walking up to 1 mile on cobblestone streets

Morning: Following breakfast, meet with your guide to embark on your guided day of touring. Start the day by visiting the Archeological Museums of Istanbul that houses some magnificent artifacts, especially the exquisite Sarcophagus of Alexander the Great and Sarcophagus of the Mourning Women. Also located in the same complex, you will also visit the Museum of the Ancient Orient to see some artifacts from the ancient Mesopotamian, Hittite and Egyptian periods.

Lunch: Lunch at a local restaurant in Sultanahmet

Dinner: Dinner on your own to explore local fare.

Morning: Start the day with a visit to the Modern Art Museum of Istanbul, to gain an insight to the modern art scene in contemporary Turkey. Here you will see the evolution of Turkish modern art starting with the later periods of the Ottoman period, all the way to our time.

Lunch: Lunch at a local restaurant in Kadikoy specializing in culinary delights from various parts of Turkey

Afternoon: Take the local commuter ferry and cross the Bosphorus to Kadikoy. Walk around the lively bazaar of this neighborhood and get a sense of life on the Asian side of the city. Take the ferry back to the old city. Rest of the day free on your own.

Dinner: Dinner on your own.

Morning: There will be group transfers from the hotel to Istanbul Airport, depending on the departure times of flights. This concludes our program. We hope you enjoy Road Scholar learning adventures and look forward to having you on rewarding programs in the future. Please be in touch via the Road Scholar Social Network, where you can share memories, pictures, and comments. Best wishes for all your journeys.

Meals
8 Meals
4 Breakfasts
3 Lunches
1 Dinner
The following choices may be available when requested in advance: Vegetarian, Low Fat, Low Fat
Lodging
Lodgings may differ by date. Select a date to see the lodgings specific to that date.
Oct 21, 2020 - Oct 24, 2020
Armada Hotel Istanbul
3 nights
Istanbul
The Armada hotel is centrally located in the old city of Istanbul, on the city's historical peninsula. It is surrounded by the ancient city walls and is within walking distance and has views of Hagia Sophia and the Blue Mosque (Sultanahmet Camii). Open since 1994, the building was constructed on the site of a series of row houses which were built for the marine soldiers of the famed Ottoman Admiral Hayrettin Pasha (Barbarossa) in the 16th century. The hotel's façade replicates the original structures.
TripAdvisor Reviews
See All Lodging Options