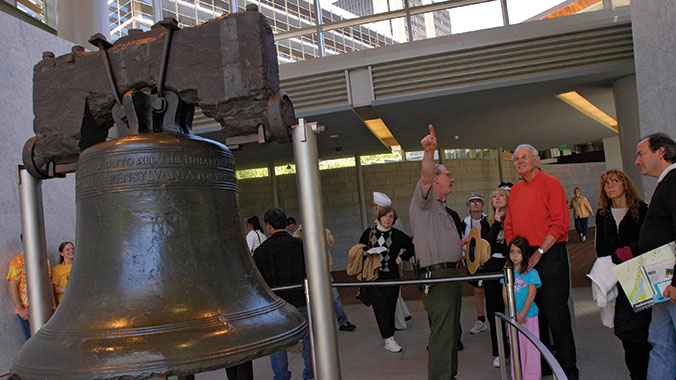 Birthplace of the Nation: Philadelphia With Your Grandchild 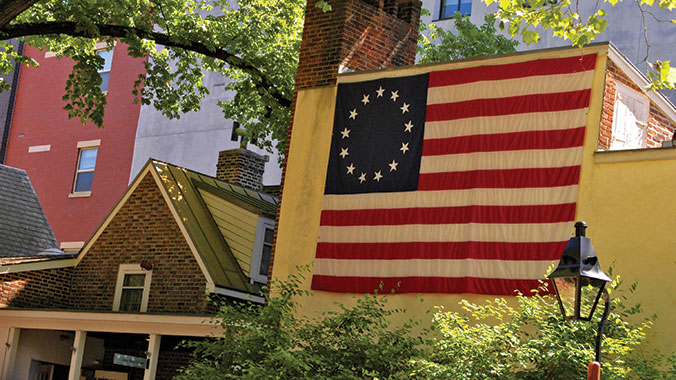 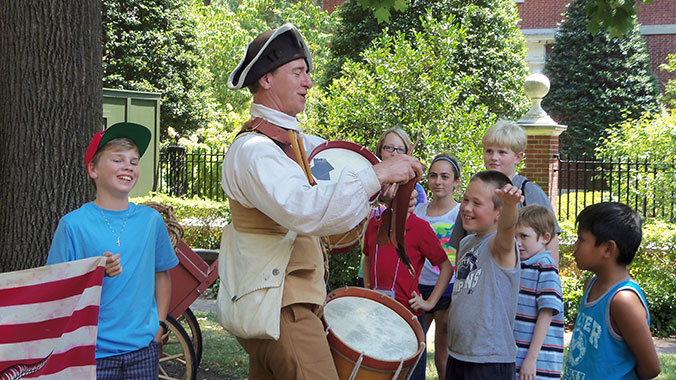 Wishlist Share Start
Discover Philadelphia with your grandchild through the eyes of a revolutionary soldier, a founding father, an 18th century child, an American icon and, of course, a Road Scholar.
Rating (5)
Activity Level

Why is Philadelphia one of the best cities in the country for grandparents and grandkids? Because there is so much history to learn about together and so many fun experiences to share! Explore the homes and hang-outs of America’s Founding Fathers and Mothers, examine revolutionary relics at the new Museum of the American Revolution, learn amazing facts about the human body inside a two-story model of the human heart and much, much more!
Activity Level
Keep the Pace
Walking one mile per day on city streets, standing at historic sites and museums. Use of public transportation, getting on and off city buses.

Program is for grandchildren ages 9-12.
Featured Expert
All Experts

John Becton
Joe Becton was introduced to history by his father, a history teacher in the Philadelphia School District. After attending Philadelphia public schools, he went on to earn associate degrees in social work and social science and a B.A. in history education at the University of West Florida. He is a noted Philadelphia musical artist who performs a repertoire of 19th century spirituals and Civil War songs. He also interprets the styles of music developed by Africans in America and the collision of cultures that created the music we call gospel, jazz and blues. Joe is a retired National Park Service Ranger at Independence National Historical Park.

Afternoon: HOTEL CHECK-IN: 4:00 p.m.; PROGRAM REGISTRATION: 4:00 p.m. (Hotel Lobby); ORIENTATION: 4:30 p.m. (room TBD). We will gather for a warm welcome and introductions, followed by an orientation to the program. We will review the schedule and any changes; discuss responsibilities, safety guidelines, emergency procedures; and answer any questions you may have.

Dinner: Dinner will be provided this evening, either at the hotel or at a nearby restaurant.

Evening: Enjoy a song fest sing along with Joe Becton and his guitar as he relates 18th C. history

Morning: After breakfast we board the bus and travel ten blocks to the Colonial City, America's most historic square mile, for a visit to The Liberty Bell and Independence Hall, both of which are national treasures and icons of American democracy. The old cracked Bell still proclaims Liberty and Independence Hall echoes the words, "We the People". Explore Benjamin Franklin's Philadelphia and learn about the past and America's continuing struggle to fulfill the Founders' Declaration that "all men are created equal".

Lunch: Lunch vouchers will be provided at the Museum of the American Revolution.

Dinner: Ben Franklin has returned just for this evening to join you for dinner. He will tell you about his childhood and adult accomplishments. He has not aged a day!!

Evening: After dinner we will take a Septa bus home from dinner.

Morning: FIELD TRIP: This morning we will depart for Old City for a visit to Elfreths Alley, Betsy Ross house and Franklin Court. Franklin Court was the site of the handsome brick home of Benjamin Franklin, who lived here while serving in the Continental Congress and the Constitutional Convention. Franklin died here in 1790; the house was torn down about 20 years later. Today the site contains a steel "ghost structure" outlining the spot where Franklin's house stood and features the Benjamin Franklin Museum. The Franklin Court complex also includes a working reproduction of an 18th century printing office, an architectural/archeological exhibit, and an operating post office.

Lunch: A boxed lunch will be provided to enjoy at the Spruce Street River Park.

Afternoon: After lunch you have time to enjoy the Spruce Street River Park. Named one of the best places to visit in Philadelphia by national press, Spruce Street Harbor Park sustained by Univest features colorful hammocks, floating gardens, beautiful lights, refreshing craft beer, and food from popular Philly restaurants, making it a summer gathering space for locals and visitors alike.

Dinner: Provided at a local restaurant.

Evening: Free evening to enjoy with your grandchildren.

Lunch: Lunch will be on your own today.

Afternoon: Enjoy your free afternoon to explore other sites in the city that are of interest to you. Your group leader will offer many suggestions.

Dinner: Dinner is on your own this evening for adults who remain back at the hotel.

Evening: Free Evening to take in a movie, attend a theater performance or just relax from a busy day.

Morning: FIELD TRIP: Rittenhouse Town offers a unique interpretive program that teaches about life in an early American village. Learn to use early techniques to make paper just like William Rittenhouse, British North America’s first papermaker. This is a great way to learn about Rittenhouse Town’s contributions to American society as well as the importance of early American occupations and resources. Don’t forget to take your paper with you when you leave! Experience 18th Century life thru a child’s eyes with Ruth Konrad. Explore clothing, games and chores familiar to Rittenhouse children more than 250 years ago.

Afternoon: After lunch we'll board the bus and head to Valley Forge. View Valley Forge National Park through the eyes of a revolutionary soldier, a real time traveler, as we learn about the Encampment of 1776.

Dinner: Dinner at a local restaurant.

Evening: After dinner we will go to Franklin Square to play miniature golf and ride a carousel. Fun for all!! Returning to the hotel for an evening swim.

Morning: FIELD TRIP: After breakfast we'll board a bus to go to Philadelphia Museum of Art. We will visit the galleries of the Middle Ages representing the renaissance period and view medieval armor.

Lunch: Enjoy our Farewell Lunch at the hotel upon our return from PMA. The program ends after lunch at 1:30 PM. Check-out is at 11:00 AM. Bags can be checked with security before we depart.

Meals
13 Meals
5 Breakfasts
4 Lunches
4 Dinners
The following choices may be available when requested in advance: Low Fat, Vegetarian, Low Salt, Gluten Free
Lodging
Lodgings may differ by date. Select a date to see the lodgings specific to that date.
Jun 28, 2020 - Jul 03, 2020
DoubleTree by Hilton Hotel Philadelphia Center City
5 nights
Philadelphia
Located in the heart of Philadelphia's arts district along the Avenue of the Arts, the DoubleTree Hotel Philadelphia Center City sits just across from the Kimmel Center for the Performing Arts, the Academy of Music, and Merriam and Wilma Theaters. Walk from our hospitable downtown hotel to South Street, the Italian Market, Antiques Row, Rittenhouse and Washington Squares, the Pennsylvania Convention Center, the Historic Waterfront District, world-class dining and shopping, and all the unique historical sites that make Philadelphia a national treasure. With easy access to I-95, Philadelphia International Airport is only 20 minutes from our hotel. AAA Diamond Rating Hotel
TripAdvisor Reviews
See All Lodging Options
5 Reviews
Sort by
Most Recent
5 Average

Philadelphia is a great city to visit and Road Scholar made it amazing.

Every American child should have the opportunity to go on this trip to Philadelphia to help them understand how extraordinary our country truly is, and how 13 states became the United States of America.

This was our first Road Scholar trip, It is an outstanding program that is full of well planned activities with an exceptional guide. We look forward to taking our younger grandson on a trip next summer. I wish we had participated in other trips with this grandson since at 12 years old, he has aged out of most trips.

It was a perfect program for my inquisitive 9-year old granddaughter. She (and I) enjoyed every minute. Our group leader was fantastic. She accommodated us all, young and "old" alike. We met some lovely people in our group.

This is a 5 STAR program. Very well paced, a lot packed in [Independence Hall, Constitution Center, Valley Forge, Waterworks, Rittenhousetown, paper making, Museum of the American Revolution, Franklin Institute, Philadelphia Art Museum]. Wow! If you did this on your own, you would not see or learn as much and you would miss 2 hours w Ben Franklin, flag raising at the Betsy Ross house with Charles Wilson Peale, Elfreths Alley, Spruce Park on the Delaware River, etc, etc. etc. The grandkids and grandparents learned a lot. Great instructors! I would do this again if I had more grandkids of this age.