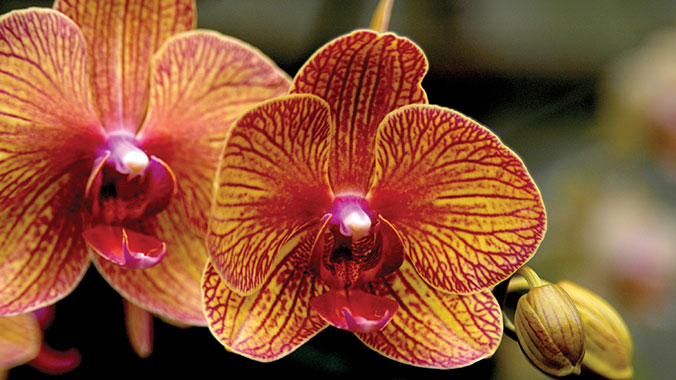 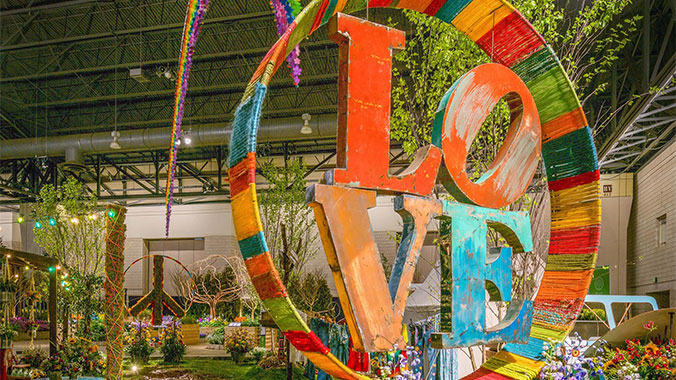 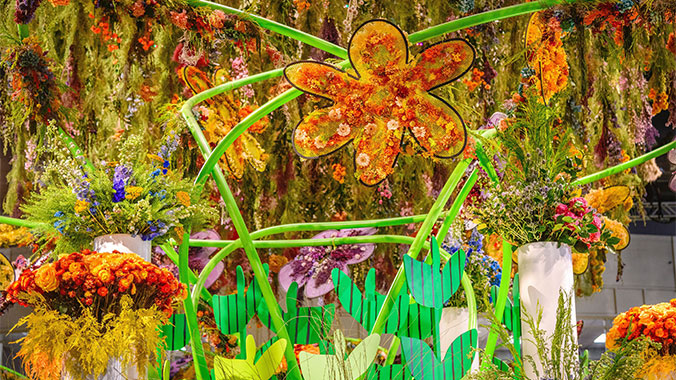 An extended five-night version of this program which gives you early morning access to The Flower Show is also available on "Flower Show, Barnes Foundation & Gardens: Five Nights in Philly" (#20362). For details, see www.roadscholar.org/20362 or call toll free at (877) 426-8056.
Suggested Reading List (4 books)
Visit the Road Scholar Bookshop
You can find many of the books we recommend at the Road Scholar store on bookshop.org, a website that supports local bookstores.
Search for a Title
A Guide's Guide to Philadelphia
by Curson, Julie P.
Masterpieces of Impressionism and Post-Impressionism, The Annenberg Collection
by Susa Stein (Editor)
Covering some of the most striking and extraordinary art to come out of the nineteenth and early-twentieth century, this handsome book presents more than fifty masterpieces by such luminaries as Monet, Van Gogh and Picasso, each work accompanied by clarifying texts and comparative illustrations.
Building the City Beautiful: The Benjamin Franklin Parkway & the Philadelphia Museum of Art
by Brownlee, David B.
The House of Barnes: The Man, The Collection, The Controversy
by Neil L. Rudenstine
The House of Barnes: The Man, The Collection, The Controversy provides the first scholarly study on the historical, art history, and political context during which Dr. Barnes purchased masterpieces and attempted to redefine aesthetics with groundbreaking new terminology.
Start Enrolling

Afternoon: REGISTRATION/ORIENTATION: Road Scholar Registration begins at 4:00 in the hotel lobby. The lecture room is listed on the sign inside the elevator. Road Scholar Orientation at hotel is at 4:30 p.m.

Dinner: At hotel or a local restaurant

Evening: Enjoy an evening lecture on John Bartram, a Philadelphia Botanist known as "greatest natural botanist in the world."

Morning: Visit the The Philadelphia Flower Show, the oldest and largest indoor flower show in the world, whose theme is always a celebration of the blending of culture, and art relating to the designs of gardens. You are on your own at the Flower Show to leisurely view the floral displays or to participate in demonstrations and lectures that are offered.

Lunch: Lunch is not included today. We suggest the Reading Terminal Market adjacent to the convention center where the flower show is exhibiting. Today, the Reading Terminal Market, considered by many as the best farmers market in the U.S., originally opened in 1892 as a city market situated in a building owned by The Reading Railroad Company from which the Reading trains would come and go from the city to the suburbs. It’s not only a popular hometown attraction, but also the most popular Philadelphia tourist destination after the Liberty Bell and Independence Hall. Eighty-six merchants including Amish Farmers have food stalls that offer patrons fresh produce, meats, fish, groceries, flowers, baked goods, crafts, books, clothing, as well as hard-to-find specialties and ethnic foods. Shopping and dining become a pleasure in this warm, inviting, and unique atmosphere. The Reading Terminal Market, like it did over a hundred years ago, is reminiscent of personal, neighborhood shopping, and still offers something for everyone. A trip to Philadelphia would not be complete without stopping here.

Afternoon: At 1:30 we will depart by motorcoach for The Philadelphia Museum of Art for our private tour of the galleries with our educator . IF YOU WISH TO STAY LONGER AT THE FLOWER SHOW AND NOT GO TO THE MUSEUM YOU HAVE THAT OPTION. The Philadelphia Art Museum has the world's most extensive collection of the works of Marcel Duchamp, including the world-famous Nude Descending a Staircase and The Bride Stripped Bare by Her Bachelors, Even. Also worth seeking out is a fine selection of the works by 19th-century Philadelphia artist Thomas Eakins, including The Concert Singer and some notable portraits. The most spectacular "objects" in the museum are entire structures and great rooms moved lock, stock, and barrel from around the world: a 12th-century French cloister, a 16th-century Indian temple hall, a 16th-century Japanese Buddhist temple, a 17th-century Chinese palace hall, and a Japanese ceremonial tea house. Among the other collections are costumes, Early American furniture, and Amish and Shaker crafts. An unusual touch -- and one that children especially like -- is the Kienbusch Collection of Arms and Armor. You will return to the hotel on your own. Transportation options are the #38 Public bus which leaves from the West Entrance steps of the museum and drops you at Broad and Locust Street, the location of the Doubletree Hotel. Or, take a taxi at a fare of $10 for 1 to 4 persons. Remember to bring your Medicare Card as Seniors travel free on our SEPTA public buses. Sightseeing buses are also available from the West Entrance of the museum.

Dinner: Dinner at a local restaurant

Evening: PERFORMANCE: Philadelphia Orchestra concert to be announced in January of 2020

Morning: We will leave by motorcoach for a full day's excursion to The Brandywine Valley. We will tour Winterthur, the residence in which Henry Francis du Pont entertained family and friends in grand style. The 175 rooms, many of them with historical architecture, are furnished with his outstanding collection of antiques and objects added since his death. These masterfully designed spaces promise to inspire, enlighten, and delight.

Lunch: Lunch is provided at Winterthur.

Afternoon: Welcome to Longwood Gardens the world's premier horticultural showplace. You are on your own at Longwood to leisurely view the floral displays in the Conservatory which covers 3 acres of exhibits. Longwood Gardens is sure to delight anyone who loves exquisite flowers, majestic trees, and opulent architecture. Here, amid 1,077 acres with 20 indoor and 20 outdoor gardens, you'll find beauty at every turn. Longwood's Conservatory is one of the world's great greenhouse structures. It shelters 20 indoor gardens and 5,500 types of plants. The Conservatory was built in 1919. At present, there are 4.5 acres of covered display, production, and research greenhouses.

Dinner: Dinner at a local restaurant.

Evening: Enjoy an evening lecture on the History of the Flower Show.

Activity note: moderate- wheelchairs available. There are benches in every gallery to sit down.

Breakfast: At hotel. Check-out is at 11:00 am. Bags can be stored with the concierge.

Morning: FIELD TRIP: The Barnes Foundation. The city’s newest cultural landmark is the new home of the world renowned Barnes Foundation Museum on Benjamin Franklin Parkway, housing the collection of Dr. Albert C. Barnes. Celebrated for its exceptional breadth, depth, and quality, the Barnes Foundation's art collection includes works by some of the greatest European and American masters of Impressionism, Post-Impressionist, and early Modern Art, as well as African sculpture, Pennsylvania-German decorative arts, Native American textiles, metalwork, and more. The new campus which opened to much fanfare in May 2012 boasts the greatest collection of Post-Impressionist art outside Paris including masterpieces by Renoir, Cezanne, Matisse, Picasso, and Van Gogh. We will visit The Barnes Foundation on the Parkway at 9:30 and return to the hotel at 12:30. Program ends after field trip.

Meals
7 Meals
3 Breakfasts
1 Lunch
3 Dinners
The following choices may be available when requested in advance: Vegetarian, Gluten Free, Low Fat
Lodging
Lodgings may differ by date. Select a date to see the lodgings specific to that date.
Mar 12, 2021 - Mar 15, 2021
DoubleTree by Hilton Hotel Philadelphia Center City
3 nights
Philadelphia
Located in the heart of Philadelphia's arts district along the Avenue of the Arts, the Doubletree Hotel Philadelphia sits just across from the Kimmel Center for the Performing Arts, the Academy of Music, and Merriam and Wilma Theaters. Walk from our hospitable downtown hotel to South Street, the Italian Market, Antiques Row, Rittenhouse and Washington Squares, the Pennsylvania Convention Center, the Historic Waterfront District, world-class dining and shopping, and all the unique historical sites that make Philadelphia a national treasure. With easy access to I-95, Philadelphia International Airport is only 20 minutes from our hotel. AAA Diamond Rating Hotel.
TripAdvisor Reviews
See All Lodging Options
6 Reviews
Sort by
Most Recent
4.83 Average

Visiting Winterthur and Longwood Gardens energized me to work on my own gardens.

This program is definitely worth the money! I throughly enjoyed the experience!!

I have traveled extensively, and loved traveling with Road Scholar. I plan to take more trips with them. Highly recommended this company..... great learning experience! Thank you!

Excellent weekend! I went a day early to make sure I had enough time at the Flower Show and stayed an extra hour at Barnes to see the 2nd floor. Well conducted programs with excellent speakers (esp. docent at Philadelphia Museum of Art and John Bertram). Food was OK for a tour group. A bit confusing with two overlapping programs and two guides. One of guides was partial to her group. Highly recommend!

This is a beautiful long weekend with the Philadelphia Flower Show as the highlight.

Minneapolis, MN
(4) a year ago

It was hard to find this program on the website. Once I found it it was hard to know just how to register. Filling out the pre-program electronic information sheet was tedious and difficult. Too many Road Scholar mailings come to us