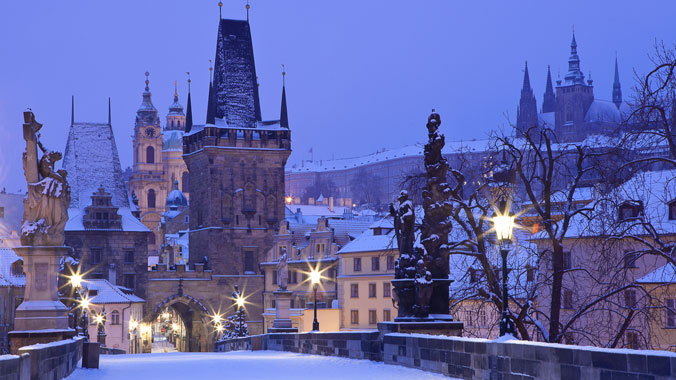 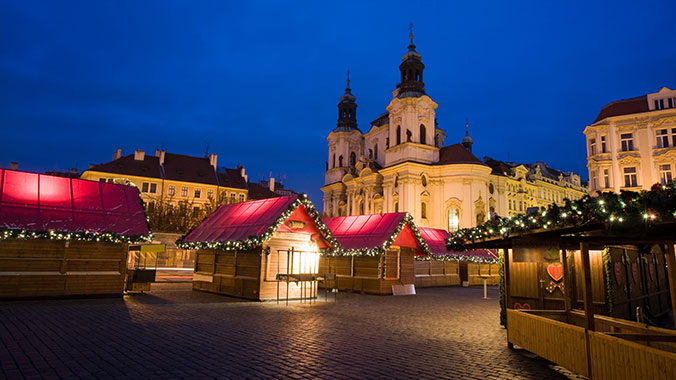 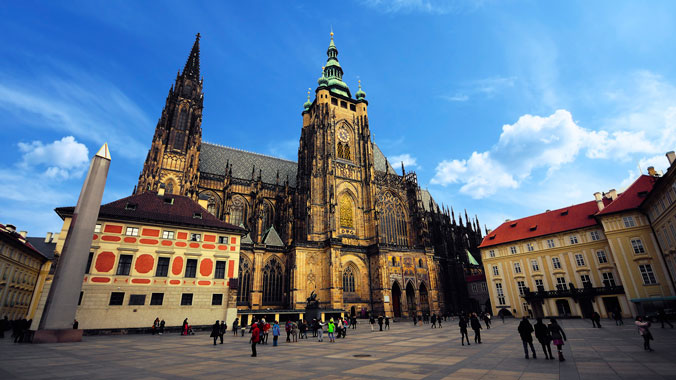 Wishlist Share Start
Celebrate New Year’s in one of the world’s most treasured cities, discovering rich cultural history, magnificent art and traditional Czech food both with the experts and on your own.
Rating (5)
Activity Level

Ring in the New Year in Bohemian style and explore the amazing city of Prague from every angle. Discover Old Town, the former Jewish Ghetto, and the lively Christmas Markets where the smell and taste of traditional Czech delicacies awaits. Learn about the beautiful buildings of this city known for its breathtakingly diverse architecture and step inside 9th-century Prague Castle and 14th-century Karlstejn Castle. Toast the dawning of 2021 during a celebration at an authentic Prague restaurant.
Activity Level
Keep the Pace
Periods of standing, walking mostly on city streets with some cobblestones and uneven terrain.

Program includes independent time to explore the city and several meals on your own. Group Leaders will provide directions for self-directed excursions. Suggestions for free-time activities provided in preparatory materials.
Featured Expert
All Experts

Hana Kundratova
Hana Kundratova was born in Ostrava, Czech Republic. She graduated with a degree in education from Charles University and then moved permanently to Prague. Having formerly worked as a teacher, Hana has been an educational group leader and program coordinator throughout the Czech Republic and its neighboring countries since 1992.

Markéta Hegarová
View biography
<%= Bio %>
Suggested Reading List
View 18 books
Dvorak and His World
by Michael Beckerman
A fascinating view of the Czech composer's personal life and his influence on the world around him.
I Served the King of England
by Bohumil Hrabal
A rollicking trip through the history of 20th century Czechoslovakia, Hrabal's comic masterpiece follows the misadventures of a simple but hugely ambitious waiter in pre-World War II Prague, who rises to wealth only to lose everything with the onset of Communism,
Open Letters, Selected Writings: 1965 - 1990
by Vaclav Havel, Paul Wilson (Editor)
This inspired anthology of writings by the Czech poet-president Vaclav Havel collects 25 essays, letters and speeches written between 1965 and 1990, including those that directly influenced the Polish Solidarity movement.
Prague Map
by Berndtson & Berndtson
A laminated, detailed map of the center of Prague at a scale of 1:10,000.
The Coasts of Bohemia, A Czech History
by Derek Sayer
A sensitively written and lively portrait of the highs and lows of Czech history over the past century with special attention to the fate of Prague in war and peace.
The Magic Lantern, The Revolution of '89 Witnessed in Warsaw, Budapest, Berlin, and Prague
by Timothy Garton Ash
With a chapter each on Warsaw, Budapest, Berlin and Prague, this eyewitness account by an astute journalist and historian shows these vibrant cities during a time of great change.
Prague Tales
by Jan Neruda, Michael Heim (Translator), Ivan Klima (Introduction)
A collection of stories set in the Little Quarter of 19th-century Prague. Neruda has been referred to as the Charles Dickens of Czechoslovakia.
The Complete Stories
by Franz Kafka
All of Kafka's stories, including The Metamorphosis, A Hunger Artist and In The Penal Colony.
The Unbearable Lightness of Being
by Milan Kundera
Kundera's intriguing novel, praised for its meditations on the nature of men and women, and on the fearful emptiness of life in Prague under Communist rule. We also carry Kundera’s collection of short stories The Book of Laughter and Forgetting.
Prague, A Traveler's Literary Companion
by Paul Wilson (Editor)
This anthology of 24 vivid stories by Czech writers, both contemporary and well-known, brings the city, history, spirit and people to life.
Beyond the Chestnut Trees
by Maria Bauer
Bauer interweaves recollections of her youth in Prague with an account of a return visit 40 years later in this affectionate, classic memoir.
Eyewitness Guide Prague
by Eyewitness Guides
This superb guide features color photography, dozens of excellent maps and a district-by-district synopsis of the celebrated city's attractions. Handsome, convenient and up-to-date, this is the guide to carry.
Frommer's Prague Day by Day
by Mark Baker
This handy, compact guide includes a separate fold-out map of the city center and detailed itineraries for experiencing the best of Prague.
A Traveller's Companion to Prague
by Jan Kaplan (Editor)
A portrait of the city, its neighborhoods, architecture, society and culture as seen through the eyes of writers over the centuries, including Petrarch, Hans Christian Anderson, Graham Greene and Patrick Leigh Fermor.
The Czech Reader, History, Culture, Politics
by Jan Bazant (Editor)
A fascinating survey of Czech history, culture and politics, part of the World Readers series, and composed of the writings and impressions of luminaries, leaders and ordinary Czechs. Among the highlights are Joan of Arc’s letter to the Hussites, the composer Antonin Dvorak’s letter from the New World and literary selections from Kafka, Kundera and Vaclav Havel.
Lonely Planet Czech Phrasebook
by Lonely Planet
A palm-sized guide to pronunciation, basic grammar and essential vocabulary.
Prague in Black and Gold, Scenes from Life in a European City
by Peter Demetz
Both a history and an accessible guide to the neighborhoods and architecture of the city.
Baroque and Rococo Art
by Germain Bazin
An excellent illustrated survey of Baroque and Rococo art and architecture, this volume in the acclaimed "World of Art" series is a good companion to the golden age of Middle Europe.
Start Enrolling

Print All
Map details are not available for this location.
View Map
Expand All
9 days
8 nights
14 meals
7 B 3 L 4 D
DAY
1
In Transit to Program
In Flight
DAY
2
Welcome to Prague
Prague
D
Hotel Petr

Dinner: Welcome dinner in the hotel dining room. Please note that water is included in the program cost at all meals.

Morning: This morning our city excursion takes us sightseeing by bus with an orientation, and then to Prague Castle, the largest residential complex in the Czech Republic (according to the Guinness Book of World Records it is the largest ancient castle in the world). The palace has served as home and office for Czech kings, Holy Roman Emperors and presidents of the Czech Republic (and Czechoslovakia) since the 9th century. The Old Royal Palace and the Cathedral of St. Vitus are breathtaking architectural treasures.

Afternoon: Enjoy a free afternoon. Take this opportunity for personal independent exploration to see and do what interests you most. Please refer to the list of Free Time Opportunities, which can be found in the first Information Packet. The Group Leader will be happy to offer suggestions and give directions.

Morning: Enjoy an expert-led excursion at the Trade Fair Palace, the largest gallery space in Prague with the city’s finest collection of paintings, objects of art, statues and other exhibits of the 19th, 20th and 21st centuries. Here, we will view many works by French artists such as; Delacroix, Courbet, Sisley, Pissaro, Monet, Seurat, Renoir, Toulouse-Lautrec, Gauguin, Cezanne, Matisse, Chagall, Rousseau, Picasso and Rodin. We will also become familiar with Czech Fine Art featuring works by Kuaka, Drtikol, Filla, Zrzavy, Spala, Lada, Trnka, Sudek, Knizak – present director of the gallery, Pistek – bearer of the Oscar for the costumes to the movie Amadeus, and many others.

Lunch: Light lunch at the Grand Café Orient on the first floor of the House at the Black Madonna. This building symbolizes the unique Czech contribution to the cubist movement.

Afternoon: After lunch, you have a free afternoon. You may wish to visit the newly-opened permanent exhibition of the Museum of Czech Cubism in the House at the Black Madonna.

Morning: Our city excursion will start in the Old Town, a unique area of Prague with the impressive Old Town Square, the center of all events since the Middle Ages. The stone houses, churches, palaces and monasteries in combination with twisty narrow streets and alleys create a very special atmosphere. We will also explore the Jewish Town. The former Jewish Ghetto is a noteworthy quarter of Prague that boasts worldwide significance. Extensive historical records trace the existence of the Prague Jewish community back to the 11th century. The Old Jewish Cemetery is Europe’s oldest and best-preserved Jewish burial ground, its history dating back to the 15th century. The graves form a chronicle in stone of the history of the Prague ghetto. Next, we will enjoy Christmas markets at the Old Town and Wenceslas Squares. Other than traditional Christmas and New Year's handcrafts, we will also find various Czech delicacies here, including sausages, potato pancakes, fresh sweet pie Trdelnik, roasted chestnuts, gingerbread, hot punch and mulled wine. These, along with performances by musicians on market stages, help to make our visit unforgettable.

Afternoon: Free afternoon to explore the city on your own.

Dinner: Greet the New Year in a traditional Bohemian restaurant with a folklore program, music, smile and dance.

Morning: Free time to relax or enjoy some fresh air in the nearby gardens.

Afternoon: A traditional New Year's walk of Prague sites leads us to the Charles Bridge, one of the oldest extant stone bridges in Europe, adorned on both sides with a total of thirty Baroque statues. Our excursion continues in the Lesser Town, a picturesque quarter with monumental noble churches and palaces.

Dinner: Snack in the cellar pub of the Municipal House, decorated by Art Nouveau tiles. Enjoy the pre-war Czechoslovakia atmosphere.

Evening: Happy New Year! Together, we will enjoy a New Year's concert at the Municipal House, the pearl of Art Nouveau style.

Morning: We depart for an excursion to Karlstejn Castle. The Gothic castle, founded in 1348 and completed in 1365, was built by the Czech King and Holy Roman Emperor Charles IV as a place to store royal treasures, especially collections of holy relics and crown jewels. We will explore not only the castle but also the village of Karlstejn and the Museum of Nativity Scenes, highlighting the famous Karlstejn Royal Nativity.

Afternoon: Free time to relax and explore on your own.

Morning: Our morning lecture will speak about contemporary life in the Czech Republic. We will discuss the political and economical changes after 1989, the new role of the Czech Republic in the “democratic world," and everyday life of ordinary Czechs.

Afternoon: Free time with multiple suggestions for a self-guided excursion.

Morning: Transfer to the Prague airport (PRG) for departures. This concludes our program. Please join our Facebook page and share photos of your program. Visit us at www.facebook.com/rsadventures.

Meals
14 Meals
7 Breakfasts
3 Lunches
4 Dinners
The following choices may be available when requested in advance: Vegetarian, Low Fat, Low Salt, Gluten Free
Lodging
Lodgings may differ by date. Select a date to see the lodgings specific to that date.
Dec 27, 2020 - Jan 04, 2021
Hotel Petr
7 nights
Prague 5
Hotel Petr is located in a quiet part of Prague only 15 minutes walking distance or two tram stops from the city center and famous historical sites such as the Charles Bridge and the National Theater. The hotel was built in 1910 and was beautifully restored in 1995. It was newly furnished in 2009, welcoming you for a peaceful night's rest.
TripAdvisor Reviews
See All Lodging Options
3 Reviews
Sort by
Most Recent
5 Average

Houston, TX
This reviewer did not give a star rating. a month ago

Great trip - I loved Prague!! Marketa was a sweet and great guide!!!

Prague is enchanting! This program is diverse encompassing music, art, history, etc. in a wonderful city. It is truly excellent in all ways.

Beautiful city and well worth the trip!