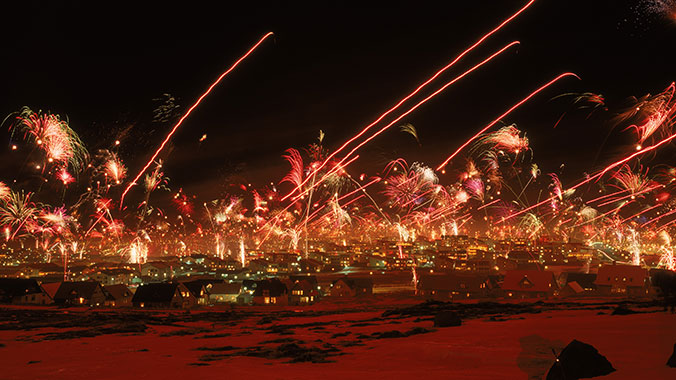 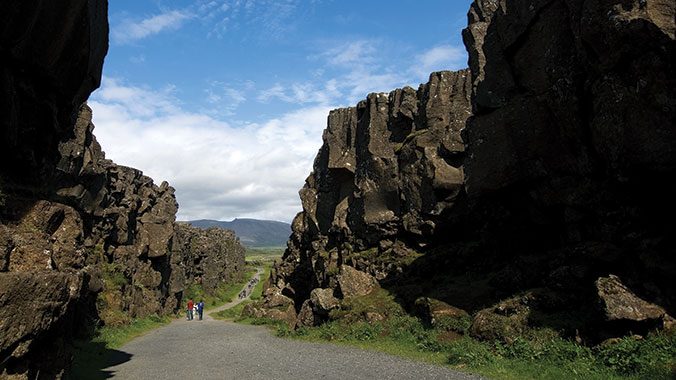 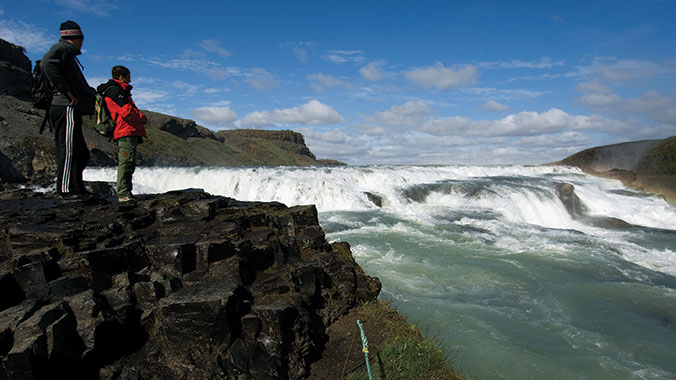 Participate in one of the world’s most distinctive celebrations of the New Year in Reykjavik, Iceland, where ancient traditions and modern technology combine in spectacular fashion. First appreciate the stillness and beauty of the Icelandic countryside at the waterfall Gullfoss and along the scenic southern coast. Discover Thingvellir National Park, where Vikings met and formed the world’s oldest parliament. Then, join Icelandic families around their celebratory New Year’s Eve bonfires, enjoy a gala dinner and watch the amazing fireworks display.
Activity Level
Keep the Pace
Walking up to two miles per day; some uneven and potentially slippery terrain. May be outdoors for up to one hour in winter conditions.

Suggested Reading List
View 18 books
Under the Glacier
by Halldor Laxness, Magnus Magnusson (Translator)
Laxness brings the full range of his wit, humor, humanity and imagination to this strange, rather slight and amusing book, in which a Church of Iceland envoy travels inland to investigate the strange goings-on in a remote parish.
Birds of Europe
by Lars Svensson
Featuring 3,500 glorious paintings by Killian Mullarney and Dan Zetterstrom, the second edition of this exquisite guide features updated text and maps.
The Sagas of Icelanders
by Jane Smiley (Editor), Robert Kellog (Introduction)
Nine sagas and six tales composed between the years 1000 and 1500, including an account of Leif Eriksson's voyage to North America, all newly translated.
Iceland Adventure Map
by National Geographic
A detailed map at a scale of 1:465,000, printed on handy tear- and water-resistant paper.
The Vikings, Lords of the Seas
by Yves Cohat
An indispensable reference that fits in your pocket, this slim volume is packed with maps, archival photographs and illustrations.
Insight Guide Iceland
by Insight Guides
This guide emphasizes culture and history, with wonderful photographs, maps and essays from experts.
Letters from Iceland
by W.H. Auden
Written with fellow poet Louis MacNiece, this quirky, under-appreciated masterpiece captures the spirit of Iceland, its people and landscapes.
Independent People, An Epic
by Halldor Laxness
Rich in local color, this great mock-epic by the Icelandic Nobel Prize-winner features the indelible Bjartur of Summerhouses, a hard-headed, independent-minded sheep farmer.
Ring of Seasons, Iceland, Its Culture and History
by Terry G. Lacy
A longtime resident of Reykjavik, Lacy weaves tales of family life, anecdote, lore and history into this illuminating personal portrait of Iceland.
Penguin Historical Atlas of the Vikings
by John Haywood
This history of the Vikings tells their story through a series of innovative maps and excellent photographs. It traces the routes of 9th-century Viking merchants and explorers throughout Europe and the New World.
The Almost Nearly Perfect People, Behind the Myth of the Scandinavian Utopia
by Michael Booth
Guardian journalist Booth writes with laugh-out-loud humor and brutal candor about the Scandinavians, mixing history and his own experiences in Nordic regions in this searing cultural portrait.
Iceland, Land of the Sagas
by Jon Krakauer (Photographer), David Roberts
Krakauer and colleague Roberts hike and climb around Iceland in this classic travel narrative, reissued as a paperback and featuring Krakauer's color photographs. The book interweaves the natural and cultural history of the island with the authors' own adventures.
Frost on My Moustache, The Arctic Exploits of a Lord and a Loafer
by Tim Moore
In this inspired folly, a British comic heads to Iceland, Spitsbergen and other northern locales in pursuit of a fictitious Arctic hero.
North: The New Nordic Cuisine of Iceland
by Evan Sung (Photographer), Jody Eddy, Gunnar Gislason
Catering to a rising interest in Nordic cuisine, this cookbook celebrates Iceland’s food alongside its haunting landscapes, portrayed in starkly beautiful, full-color photos.
A Naturalist's Guide to the Arctic
by E.C. Pielou
A primer on Arctic climate, geography, plants, birds, mammals and insects in a single nicely written book. It's a highly recommended, enthusiastic guide to natural history throughout the Circumpolar North.
The History of Iceland
by Gunnar Karlsson
A history of Iceland from the Viking-era through colonization, independence and the 20th century. Karlsson draws on the sagas and rich literature of Iceland in presenting this comprehensive history.
Last Places, A Journey in the North
by Lawrence Millman, Paul Theroux (Introduction)
Millman explores the culture and history of the Faroes, Iceland and Greenland in this hilarious account of his travels in the wake of the ancient Vikings.
Jar City
by Arnaldur Indridason
Indridason's first moody police procedural finds Reykjavik detective Erlendur Sveinsson investigating the brutal murder of a lonely pensioner and the man's connection to the deaths of a number of young women. Made into a darkly superb film.
Start Enrolling

Print All
Map details are not available for this location.
View Map
Expand All
6 days
5 nights
11 meals
5 B 3 L 3 D
DAY
1
In Transit to Program
In Flight
DAY
2
Welcome to Iceland
Reykjavik
B,D
Hotel Reykjavik Centrum

Activity note: Check-in available from 4:00 PM. Please make sure to pack your bathing suit in your carry-on luggage, as we are visiting the Blue Lagoon on our way to the first hotel. Towels are provided at the Blue Lagoon. Slippers and bathrobes are available at an additional cost.

Breakfast: Buffet breakfast at the Northern Light Inn. On this program, breakfasts will offer a typical European style breakfast buffet with breads, cheeses, cold-cuts, yogurt, fruit, cereals, juice, milk, coffee, tea and water. Please note that water is included in the program cost at all meals.

Morning: After breakfast, drive to the Blue Lagoon. Begin your Icelandic experience with a relaxing soak in the mineral-rich, geothermally-heated waters of the Blue Lagoon. (Entrance and towels included.) Fully refreshed, continue to the city of Reykjavik and check in at the hotel.

Afternoon: Free time to relax or explore a little in downtown Reykjavik. Program Introduction will be at dinner. Your Group Leader will greet everyone and lead introductions. We will review the program theme, the up-to-date Daily Schedule and any changes, discuss safety guidelines, emergency procedures, roles and responsibilities, and answer any questions you may have. Indicated times are approximate. Program activities, schedules, and personnel may need to change due to local circumstances. In the event of changes, we will alert you as quickly as possible. Thank you for your understanding.

Dinner: Welcome dinner and introduction. Experience traditional Icelandic cuisine at Lækjarbrekka, one of Reykjavik's most historic restaurants, located in a charming old building of Reykjavík. Unless otherwise noted, dinners on this program are typically a three-course set menu.

Activity note: Participants are encouraged to bring warm shoes, a scarf and hat for the bonfire.

Morning: Discover Europe's northernmost capital on an expert-led visit of Reykjavik with your Group Leader.

Afternoon: Free time. You may wish to visit the Reykjavik Art Museum, The Culture House, or the Volcano House. Another option is to take a walk around Lake Tjornin in the center of Reykjavik or up to the Church of Hallgrimur for a great view of the city. Your Group Leader will provide directions and advice as needed.

Dinner: New Year’s Eve celebration with a festive 5-course gala dinner at the Grand Hotel Reykjavik. There will be entertainment and live music.

Evening: Set out to experience the bonfires that kick off the evening’s celebration in each community surrounding Reykjavik. Mingle with locals, as no one misses the annual bonfire! Each town vies for the reputation of having the best. Return to the hotel for coffee and dessert. From your vantage point, watch as the entire sky, as far as the eye can see, fills with fireworks as midnight approaches, building to an endless explosion of light and color that are of a beauty and magnitude like nowhere else on earth.

Morning: As the morning light brightens, depart to the golden waterfall — Gullfoss. Experience the stillness and beauty of the wintry countryside and the frozen waterfall. Continue to Geysir, where the active Strokkur Geyser bursts forth every few minutes in a cloud of steam. Discuss how geothermal energy is used to provide hot water, heat and grow vegetables.

Lunch: At a local restaurant. Unless otherwise noted, lunches on this program are typically a two-course set menu.

Afternoon: Return via Thingvellir National Park, the site of the original Parliament and the most sacred place in Iceland because of its geological and historical significance. The Althing, or General Assembly, was established in 930 CE and is the world’s oldest existing parliament. Not only historically significant, the site is located on the meeting point of the American and European continental plates.

Activity note: Due to winter weather and distance, you will spend approx. 5-6 hours on the bus today, driving along the South Coast.

Morning: Depart Reykjavik in the late morning to journey along the scenic south coast. The white snow and black lava contrast starkly in the peaceful winter landscape.

Afternoon: Visit Seljalands waterfall and the Skogar Museum of folk history. Return to Reykjavik in the late afternoon.

Morning: Check out of the hotel. Explore Iceland's dramatic geology and learn about the region's biodiversity on an expert-led visit to the Wonders of Iceland exhibit at Perlan, then depart to the National Museum. After an expert-led introduction, view the exhibits independently.

Lunch: A light lunch in a local restaurant.

Afternoon: Depart to Keflavik International Airport (KEF). This concludes our program. Please join our Facebook page and share photos of your program. Visit us at www.facebook.com/rsadventures.

Meals
11 Meals
5 Breakfasts
3 Lunches
3 Dinners
The following choices may be available when requested in advance: Low Fat, Low Salt, Vegetarian, Gluten Free
Lodging
Lodgings may differ by date. Select a date to see the lodgings specific to that date.
Dec 29, 2020 - Jan 03, 2021
Hotel Reykjavik Centrum
4 nights
Reykjavik
Hotel Reykjavik Centrum is a first-class hotel in the heart of Reykjavik. It is located on one of Reykjavik's oldest streets, Adalstraeti, in a newly renovated building, the oldest part of which was built in 1764. During renovations, the remains of a Viking longhouse from the Settlement Period were found. In 2006, an attractive exhibition center opened under the hotel, where the longhouse's remains are on display together with related exhibits. Among the finds excavated were Iceland's oldest human remains, dating from approximately 870 AD.
TripAdvisor Reviews
See All Lodging Options
3 Reviews
Sort by
Most Recent
5 Average

Iceland for New Years Eve is like nothing I've ever experienced. Iceland is a beautiful country with captivating scenery, warm people, and all kinds of delights. It's magical and I will definitely return!

Trip was very well planned and executed. Tour leader was organized, knowledgeable, and a good communicator. Food and lodging accommodations were very good.

If you are looking to spend a unique New Year's Eve to enjoy the answer is the Road Scholar trip to Iceland. The Blue Lagoon, bonfires and fireworks are celestial.