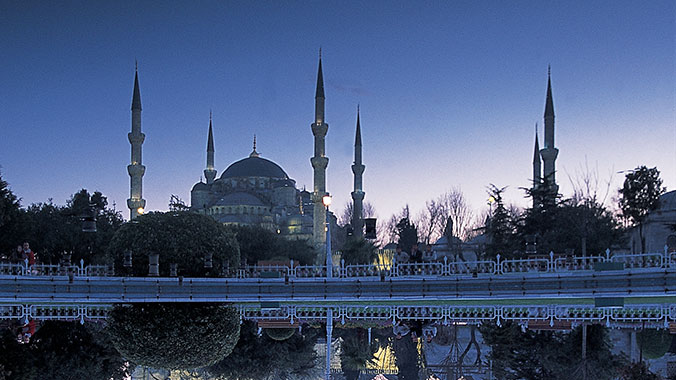 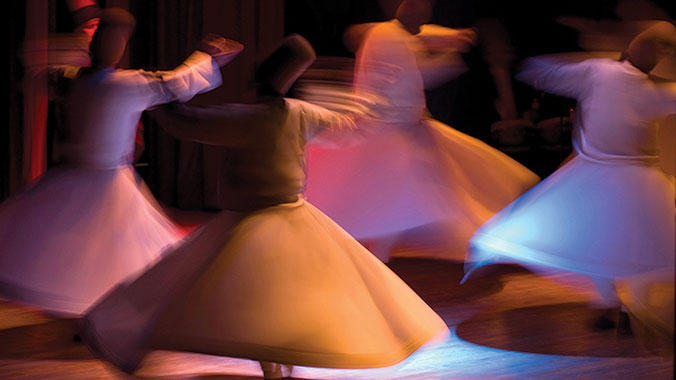 Wishlist Share Start
From Byzantine art to ancient Greek architecture, from medieval knights to Ottoman Sultans, discover the many wonders of Istanbul as you explore 17-centuries of history with scholars.
Not yet reviewed
Activity Level

Istanbul is the only place on earth where you can experience two continents, 17 centuries and the customs of dozens of ethnic groups within the confines of a single city. Discover the magical and legendary in Istanbul through presentations on Byzantine history and art, Ottoman architecture, and the evolution of the bazaars, along with visits to its great monuments: Hagia Sophia — the grand former cathedral of the Byzantine Empire — the Roman Hippodrome and Topkapi Palace, seat of the Ottoman Sultans for over 400 years.
Activity Level
Let's Go!
Walking up to four hours on crowded city streets and bazaars. Stairs in some buildings and on motorcoaches.

Program includes independent time to explore the city and several meals on your own. Group Leaders will provide directions for self-directed excursions. Suggestions for free-time activities provided in preparatory materials.
Featured Expert
All Experts

Zeynep Kuban
Dr. Zeynep Kuban is an assistant professor of architecture at Istanbul Technical University, one of the most prominent educational institutions in Turkey. Her special area of interest is architectural history. Dr. Kuban’s lectures to Road Scholar participants share her wonderful insights on the creation of one of the world’s most architecturally fascinating cities from early Roman times to the 21st century.

Print All
Map details are not available for this location.
View Map
Expand All
8 days
7 nights
15 meals
6 B 5 L 4 D
DAY
1
In Transit to Program
In Flight

Evening: Depart on overnight flights from the U.S.

Afternoon: We will gather in our private meeting room at the hotel at 6:00PM where your group leader will greet you with a warm welcome and introduce everyone. We will review the up-to-date daily schedules, discuss responsibilities, safety guidelines, emergency procedures and answer any questions you may have. Please be aware that program activities and scheduled times could change due to local circumstances. In the event of changes, we will alert you as quickly as possible. Thank you for your understanding.?

Dinner: Welcome Dinner at the hotel.

Morning: A professor from the Istanbul Technical University School of Architecture delivers a lecture on "Urban Development of Istanbul from an Architectural Perspective." Afterwards, set out to discover the breathtaking Hagia Sophia on a guided visit. Hagia Sophia is one of the most important architectural structures in the world and a testimony to the power and influence of the Byzantine Empire in 6th century.

Lunch: In a local restaurant in the old city.

Afternoon: You will then explore the Underground Cisterns built in 532 by Justinian to provide water to the city. The cistern is built using 336 recycled columns and could hold up to 100,000 tons of water. Walk through the remains of the ancient Hippodrome and learn about the 3 existing monuments from Byzantine times, including the obelisk brought from Egypt and the Serpentine Column brought from the Temple of Apollo in Delphi.

Dinner: At a local restaurant walking distance to the hotel.

Morning: Today you will set out to visit the Mosque of Suleiman the Magnificent, the second-largest mosque of Istanbul, built by the illustrious royal architect Sinan for the most powerful Sultan, Suleyman the Magnificent. Continue with the Sultan Ahmed Mosque, known as the Blue Mosque for its exquisite tiles. Built in 1616, this spacious mosque has dominating the skyline of the city for 400 years.

Lunch: At a restaurant in the old city, next to the Mosque of Suleiman the Magnficent

Afternoon: Visit two more mosques in the afternoon. One of them will be the small yet exquisite Mosque of Sokullu Pasha, built also by the great architect Sinan, for one of the most successful grand viziers of the Ottoman Empire. Before heading back to the hotel, visit the lovely Rustem Pasha Mosque, a small gem due to its splendidly beautiful 16th century Iznik tiles.

Dinner: At a local restaurant

Evening: Attend a Whirling Dervish Ceremony to witness the rituals of the more moderate Sufi sect of Islam.

Morning: Start your day at the Topkapi Palace, primary residence of the Ottoman Sultans for 400 years of their 600-year reign, from 1465 to 1853. At the height of its existence as a royal residence, the palace was home to as many as 4,000 people. The palace collections include Ottoman treasure, jewelry and the most holy relics of the Muslim world. You will also visit the Harem, to gain a better insight to the secret and daily life of the royalty.

Lunch: Lunch at a local restaurant.

Afternoon: Discover the Dolmabahce Palace, the second palace of the Ottoman Sultans, situated on the Bosphorus. Visiting this Palace will provide a better insight to the socio-economic and cultural changes that the Ottoman Empire was going through in 19th century. This palace is an eclectic mixture of European architectural styles.

Dinner: Dinner on your own

Evening: Enjoy a lecture at the hotel on Contemporary Turkey and its Issues, delivered by a well known professor from a local university.

Morning: This morning we will set out to enjoy a unique opportunity to walk along the ancient walls of Istanbul, including the Yedikule Fortress and Dungeons. Stop at the Church of Chora (Kariye Museum), situated along the walls. The Church of Chora exemplifies the most exquisite examples of late Byzantine Art in the form of mosaics and frescoes.

Lunch: In a restaurant in the old city, by the ancient city walls.

Afternoon: Visit the Eyup Mosque, located on the Golden Horn. This mosque is a holy place for Muslims because the standard bearer of Prophet Muhammed is buried here. Continue on to the Greek Orthodox Patriarchate to visit this important church for the Greek Orthodox faith. Also stop by the Bulgarian Church, assembled on the site completely with iron pieces shipped on the Danube from Austria.

Morning: Start our day with a stroll through the Grand Bazaar to discover the maze-like streets of this colorful bazaar, dating back to the 15th century. Now there are about 4,000 small shops selling all kinds of crafts, textiles, hand made arts and jewelry.

Lunch: In a restaurant at the Bazaar.

Afternoon: Visit the Spice Bazaar where exotic aromas capture your head as soon as you walk in. Sample different flavors of the Turkish delight and wonder at the different kinds of spices for sale at this bustling bazaar. End the day with a private cruise on the Bosphorus, the natural waterway that separates the city on two different continents, linking the Black Sea with the Sea of Marmara. You will see opulent palaces and mansions, ancient fortresses and modern suspension bridges during this relaxing cruise.

Morning: There will be group transfers from the hotel to Istanbul Airport, depending on the departure times of flights. This concludes our program. We hope you enjoy Road Scholar learning adventures and look forward to having you on rewarding programs in the future. Please be in touch via the Road Scholar Social Network, where you can share memories, pictures, and comments. Best wishes for all your journeys?.

Meals
15 Meals
6 Breakfasts
5 Lunches
4 Dinners
The following choices may be available when requested in advance: Vegetarian, Low Fat, Low Salt
Lodging
Lodgings may differ by date. Select a date to see the lodgings specific to that date.
Oct 10, 2020 - Oct 17, 2020
Marmara Pera Hotel
6 nights
Istanbul
Renovated in 2004, the Marmara Pera is a modern hotel centrally located in the historic Beyoglu district at the heart of Istanbul, in the Pera region, within walking distance of the pedestrian area.
TripAdvisor Reviews
See All Lodging Options