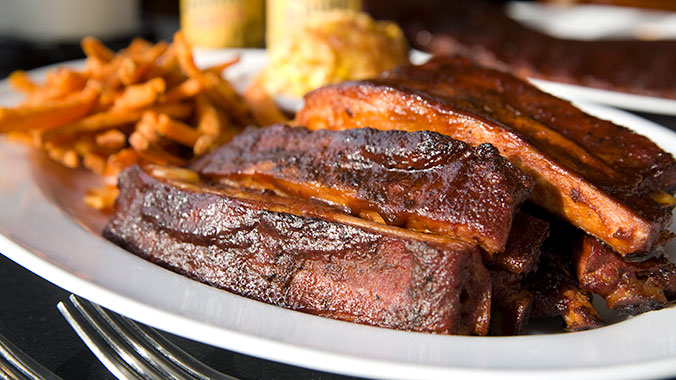 The Best Barbecue in the World: Secrets, Sauces and Smokers 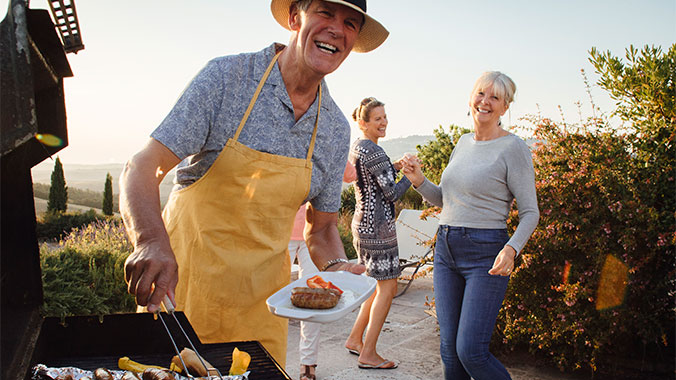 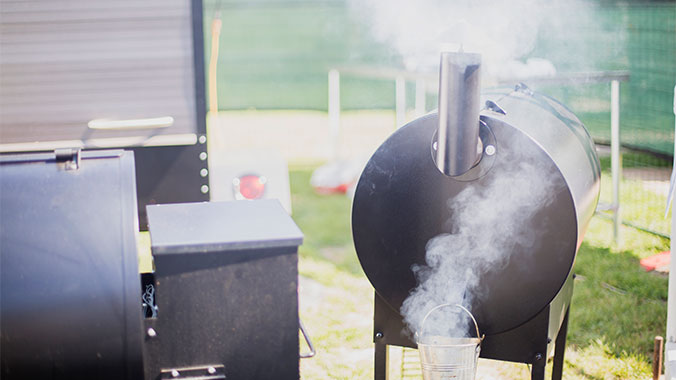 Wishlist Share Start
For some, BBQ is more than just cooking, it’s a way of life. Come see for yourself as you join an experienced Pit-Master for an in-depth look at their culinary craft.
Rating (5)
Activity Level

Explore the history and experience mouthwatering recreations of the world’s oldest live-fire cuisine! Delve into the evolution, philosophy and customs of this delicious culinary art form with Seth Watari. Seth hasn’t always loved barbecued meats. He can’t claim that his dad or grandfather were great Pit Masters, because they weren’t great Pit Masters; but Seth encountered Southern Barbecue while traveling in South Carolina in 1974. During a business trip, to the up-state, a chance dining experience with two local “Country” gentlemen started his quest for Southern Barbecue perfection. From that day forward, Seth has traveled 49 states sampling and learning about regional Barbecues. Settling in South Carolina’s Low Country, where Barbecue seems to be almost a religion, Seth narrowed his Barbecue focus on Low Country Barbecue history, techniques and flavors. Seth now shares his Barbecue experience and knowledge with Barbecue judges, experienced Pit Masters, and most importantly, backyard cooks.
Activity Level
Easy Going
Walking 2-3 blocks; some uneven terrain.

The Retreat Difference: This unique, often basic and no-frills experience at a Road Scholar Retreat includes opportunities for early morning exercise, interaction with the local community for insight into local life, an authentic farm-to-table or locally sourced meal, a live performance or event, and a value-priced single room. Due to the nature of this program, listening devices are not available.
Featured Expert
All Experts

Seth Watari
Seth is an award-winning cook, competition judge and instructor specializing in Lowcountry barbecue native to South Carolina. His interest in barbecue dates back to the mid-1980s when he lived in Herndon, Virginia. He is a cofounder of the Southern Barbecue Network, which sanctions tournaments and certifies judges in South Carolina, and the co-owner and pit master of the Some-R Swine competition team. Seth has also taught at the Carolina Pit Masters Barbecue Cooking School.

Dinner: Enjoy a sumptuous Low Country Dinner, served at 6 PM. A brief orientation will follow dinner and you will meet Seth, your Master BBQ Chef..

Breakfast: Start the day out right with our Lowcountry Breakfast - Breakfast begins at 8AM

Morning: A Master BBQ Chef and certified BBQ Judge will do Classroom study of History and philosophy of Lowcountry BBQ. You will begin to prepare the Chickens for the pit!!

Afternoon: Enjoy the expert instruction while slow smoking BBQ Chicken. which includes a really unique preparation method where BBQ chicken is the star!

Evening: Join us for a fun filled evening learning about the history and background of the surrounding area, natural or cultural history, and the history of your host, the LifeTides Institute.

Activity note: Tuesday: Ribs We'll be preparing ribs from the day's discussion. * Spare ribs * Baby back ribs * Feather Bones We will learn how to prepare 'Chicken Pirlou' as a side dish from the chicken leftover from Monday's dinner. Learn how to make the best Green Beans ever from the grill.

Breakfast: Start the day out right with our Lowcountry Breakfast. Breakfast begins at 8AM

Lunch: Break for lunch and a bit of free time. Lunch is served buffet style at noon

Afternoon: Hands on: preparing the ribs for the pit. You will learn about different types of rubs, how they are made and used.

Dinner: Your great ribs, our acclaimed sides and desserts beginning at 6PM

Evening: A local sweet grass basket maker will demonstrate the art of basket making. He will also share with you the history behind the art. He will bring an assortment of baskets for you to admire. Very unique in sizes and shapes.

Breakfast: Fuel up with a Low Country buffet breakfast beginning at 8AM

Lunch: Yet another mouth watering lunch!

Afternoon: Hands on getting the butts ready for the smoker for pulled pork for dinner!! Enjoy the afternoon tending the smoker with the Pit Master. Great time for Q&As in a very relaxed environment.

Dinner: 6PM enjoy your hard work from the day! Pulled Pork and the BBQ Pit Beans, with other savory sides!

Evening: Tonight enjoy a very captivating story teller about local history and culture of the Lowcountry.

Activity note: Today you will have free time after lunch to explore the surrounding areas. We will prepare lunch for those that desire, covering items such as BBQ Tacos with coleslaw, and Smores from the smoker! (Yum!)

Breakfast: Our famous Low Country breakfast buffet is served at 8AM

Morning: 9am. BBQ Gadgets "101". Learn the science of BBQ with the latest BBQ Gadgets. Pit Master Graduation and class photos.

Afternoon: Free afternoon for sightseeing at nearby Savannah, Hilton Head or Beaufort.

Evening: Our final evening with a special Farewell Party!

Breakfast: The final leisurely low country breakfast, served at 8 AM.

Morning: Reviews and wrap up, Participants get to tell parting stories and ask final questions. Then, it's packing and preparing to go.

Meals
14 Meals
5 Breakfasts
4 Lunches
5 Dinners
The following choices may be available when requested in advance: Vegetarian, Gluten Free
Lodging
Lodgings may differ by date. Select a date to see the lodgings specific to that date.
Sep 27, 2020 - Oct 02, 2020
LifeTides Institute's Community of Cottages
5 nights
Ridgeland
Thirty minutes from 300-year-old Beaufort’s antebellum charm and nestled on a 350-acre marsh island near the headwaters of the Broad River, the LifeTides Institute hosts Road Scholars in a community of comfortably appointed cottages with their own master suites (2-4 suites per cottage). Each cottage bedroom contains two queen-size beds with private baths, and has a shared living room, with full kitchen, washer & dryer and porches overlooking a beautiful marsh. There are ceiling fans and air-conditioning in all cottages. Freshly prepared meals are served buffet-style in a main dining facility, paying homage to local and organic ingredients. The area's nature trails offer ample opportunities to see wildlife in the nearby woods, including up to 250 species of birds. Good to know: Limited Internet access in common areas. No TVs in cottages. Note: Single-occupancy lodging is an additional $420. Most meals served buffet-style; bus own table.
See All Lodging Options
8 Reviews
Sort by
Most Recent
5 Average

What a great week! Seth is a wonderful teacher, and my waistline shows it. Since that week, I’ve prepared several items - several people said my smoked spare ribs were the best they’ve every eaten!

This was above all my expectations and I thoroughly enjoyed it. The staff and accommodations were fantastic. I will return.

BEST Kept Secret is a good description for BBQ Camp! My wife and I have traveled extensively with Travel Companies and this BBQ camp experience rates in our top five favorite vacations. Seth, Nona, Jan, Andy and John hosted a camp that begins with a home cooked breakfast, instructional lessons on preparing the best BBQ ever with delicious side dishes, and mid day filed trips to explore the Low Country. At the end of the day, the dinner we prepared in the morning brought all participants together to celebrate our BBQ Camp. If the meal wasn’t enough we were entertained by local artists, story tellers and a historian about South Carolina. This camp will soon have long wait lists because it’s not a secret anymore.

Great instructor, great food and a great place to stay.

If you like BBQ and want to learn about how to cook BBQ, then this is the course for you!

Raleigh, NC
This reviewer did not give a star rating. a year ago

FIVE STARS! The Best Barbecue program offered much more than I anticipated. I thought I already knew right much about Barbecue but it was minimal compared to what I learned. Champion Pitmaster JT Handy shared his deep love for all things barbecue through history, tastes, grilling, and smoking. I returned home with a more thorough understanding of what Barbecue truly is and how it came to be. And it’s NOT what you do on the grill to hotdogs and hamburgers! I was pleased that there was a good deal of hands on preparation for our dinner meals but it was completely optional. We could choose whether to get the pork butts, chicken, ribs, brisket, potatoes, vegetables, salad, beans, bread, etc. ready for our nightly dinners or simply sit on the screened porch enjoying an iced tea, a cup of coffee, or a self-provided adult beverage. Andy Hooten and Jan Schatz were most gracious, friendly hosts. They treated us like a loving family. The meals they prepared for breakfast and lunch were beyond amazing! On the first and last night Andy and Jan cooked some of their specialties and no fine dining establishment could have done it better! Local oyster season was winding down and they had an oyster roast for us before dinner one evening. Our accommodations were in a cluster of well appointed, comfortable cottages overlooking the marshlands of LifeTides Institute. We gathered for meals and camaraderie in a main cottage just steps away from our various shared cottages. LifeTides Institute is a learning center with the mission of teaching adults and local school students about the Biological Diversity of the SC Lowcountry Environment. In addition to being a fabulous cook, our host Andy is a biologist focusing on coastal and marine resource management and the sustainability of those environments. When the program was over we all commented that we would like Road Scholar to offer a Barbecue 201 program to further our knowledge and give us a chance to return to this lovely place.

If you enjoy barbeque, the outdoors and a great experience this is the program for you. The Instructor, JT, was great and the Program Providers were awesome. They all made for an incredible experience.

Southern Barbecue-Now I understand why folks rave about it and say you have to experience it. Many days making and eating in a gorgeous location. Can't ask for more.

Continue
Choose Your Airfare
The prices shown here are for airfare only. When you select your airfare, your total price will be updated on the Dates & Prices page.
Choose an airport
Sep 27 -
Oct 02, 2020