Rivers around the world have their own personality and the experiences you enjoy reflect the cultures and customs of the countries they flow through. Cruising through Europe offers a vastly different experience than the rivers of Southeast Asia or navigating the Mississippi River, each with their own unique features and comforts. Europe — the most popular river cruise destination in the world — is home to sleek, narrow riverboats for all comfort levels; intimate ships built to navigate the thriving rivers of Southeast Asia combine traditional and colonial influences; grand paddlewheelers and steamboats recall a bygone era on the Mississippi and its tributaries. 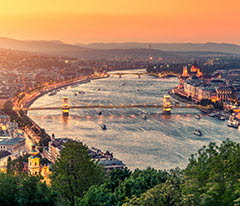 Voyages typically sail April through December on Europe’s storied waterways, connecting historic capitals and quaint villages. Europe’s main rivers offer rapidly changing scenery and cultural traditions that can vary greatly country to country. The Rhine, Main and Danube — allowing uninterrupted cruising from Amsterdam to Budapest and beyond to the Black Sea — are easily navigable and can be sailed on several cruise lines at every price. As one of the earliest destinations utilizing river cruising as a new form of travel, educational river cruises in Europe have perfected balancing broad, regional immersion with more in-depth destination-specific itineraries. Cruises are available through much of the year with tulip-themed sailings in the spring, traditional cruises through most the year and holiday market voyages through Germany and Austria in early winter. With so many ships, itineraries and rivers from Portugal to Russia, European river cruises are great for first-timers and veteran cruisers alike. 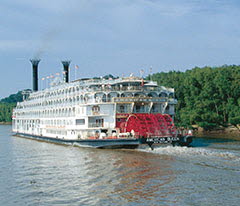 Largely broken into two categories, North American river cruises unveil the rugged beauty of the Pacific Northwest’s Columbia and Snake Rivers or the history and culture of the Mississippi and its tributaries. Follow in the footsteps of Lewis and Clark’s Corps of Discovery on their journey toward the Pacific Coast or float along the Mississippi, evoking Mark Twain’s literary legacy. The entire length of the Mississippi is navigable, sailing from St. Paul, Minnesota to New Orleans with ports in 10 states along the way. Connecting to the Mississippi at the borders of Missouri, Illinois and Kentucky, the Ohio River flows for nearly 1,000 miles from its origin at Pittsburgh and connects Pittsburgh, Cincinnati and Bourbon County to New Orleans and the Gulf of Mexico.

The ships navigating these storied waterways are reminiscent of the time when steamboats and paddlewheelers prevailed and offer itineraries delving into American history. Themed cruises include venturing to sprawling plantations, visiting somber Civil War battlefields and following the path of Huckleberry Finn on the Mississippi River. On the Ohio River, follow the route of some of the earliest pioneers from Pittsburgh or explore the distilleries of Kentucky’s Bourbon County. In the Pacific Northwest, expedition-style voyages offer intimate experiences with the region’s mountains, canyons and more. Depending on the part of the country, North American river cruises sail April to November. 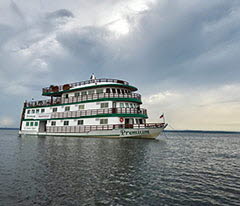 River cruises in South America are centered on the jaw-dropping scenery of the Amazon Rainforest and learning about the wildlife and the indigenous peoples who call this region their home. Sailing from Manaus, Brazil, or one of two ports in the Peruvian Amazon — Iquitos or Nauta — river cruises in the Amazon focus on an adventurous experience in the more remote sections of the rainforest. Unlike other cruises, more time will be spent on the water than on land: watching for wildlife along the shore and getting close to the river on motorboats and in canoes.

Ships range in size from 16 to 70 cabins and combine traditional Amazonian influences with modern amenities for the ultimate natural experience. Cruises sail all year long but vary depending on high season versus low season. During high season from December to May, smaller tributaries are more accessible and you can journey farther into the jungle. The water recedes during the low season — sometimes up to 40 feet — for more walks along the jungle floor. 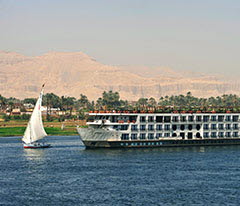 Africa’s waterways offer an experience unlike anything else in the world. On the Nile River in Egypt, learn about the legacy of the Egyptian Empire between Cairo and Lake Nasser in search of monolithic temples and ancient necropolises. Itineraries vary in length but generally visit both Luxor and Aswan as well as a selection of lesser-visited archaeological sites. Cruises range from smaller, traditional boats to luxurious multi-deck riverboats with all ranges of amenities. Nile river cruises sail year-round, but the most popular time is when the weather is cooler from October to May.

For a different perspective, a number of cruises have begun sailing the Okavango Delta and the Chobe and Zambezi Rivers bordering Botswana, Zambia and Zimbabwe. These cruises provide an alternative to the traditional safari in Chobe National Park and do not have any ports of call other than their origin port of Kasane, Botswana. Ships are specifically designed for wildlife viewing with fewer than 15 cabins, creating a personal, intimate safari. During the wet season, riverboats are able to sail deeper into the parks, and the landscape comes alive with color and birdlife is at its best. Beginning in April and lasting until October, the dry season coincides with summer and is cool and sunny. The wet season, from November to March, is the warmer, more humid time of year. 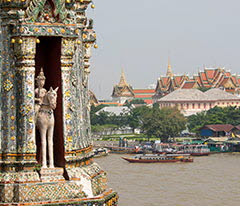 A recent flourish in cruise itineraries has helped the remote villages and picturesque temples of India, China and Southeast Asia become more accessible than ever. The main river cruise destinations are: China’s Yangtze River, the Mekong River in Vietnam and Cambodia, Myanmar’s Irrawaddy River and the sacred Ganges River in India. Cruises include expert-led excursions in regions of these countries that may be otherwise hard to reach and provide a better understanding of the local heritage. Newer ships — combining the region’s cultural and colonial heritage with modern amenities — have been custom built to navigate a river’s more challenging stretches that were previously inaccessible. These cruises are designed to provide an authentic and immersive journey focused on the people and the countryside as opposed to larger cities. There are also a number of shorter cruises that are combined with longer land-based itineraries for a broader experience. Asian river cruises sail year-round but mostly operate between April and October.

Best Rivers to Learn by Riverboat 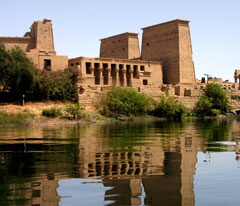 The longest river in the world begins with two branches in Ethiopia and Lake Victoria. They merge in Sudan and split again before emptying into the Mediterranean Sea. The Nile and its branches flow through 10 countries in East Africa. Its name is derived from the Greek word “neilos” for “river.” The river’s water supply and fertile banks allowed the civilizations of Ancient Egypt to thrive and gain wealth and power. Visit ancient temples along the river and learn about the Nile’s famous dams that serve as major feats of engineering. 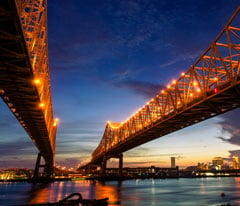 Beginning in Minnesota, the Mississippi River flows south through a total of 10 U.S. states to Louisiana and empties into the Gulf of Mexico. It ranks as the fourth-longest river in the world. The Mississippi has played important roles in U.S. history as a vital source for Native Americans, a means of western expansion, trade and transportation. Cruise on the Mississippi River to charming port towns and famous cities like Nashville, Memphis and New Orleans as you learn about southern heritage, Civil War history,American jazz and more. 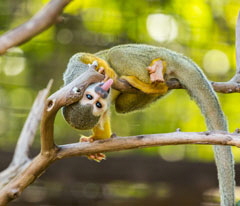 The Amazon River is South America’s largest river and discharges 20% of the world’s river waters into the ocean, greater than any other river in the world. It flows through Ecuador, Peru, Colombia and Brazil; the length of the river is about the same distance between New York City and Rome. The Amazon Rainforest, along the river’s basin, is home to half of the Earth’s remaining rainforest. Sail along the river to enjoy stunning rainforests and reserves and learn about Amazon ecology.

The Danube flows east from Germany, through a total of 10 European countries to Romania, emptying in the Black Sea. It is the second-longest river in Europe and flows through more countries than any other river in the world! The Danube is lined with miles of bicycle trails, and its waters are home to a graveyard of mid-20th-century German ships, visible in the summer when the water levels fall. Explore medieval villages and learn about the history of castles and cathedrals as you travel along the river by boat. 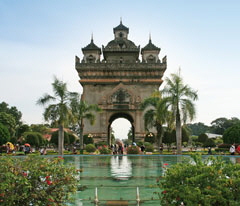 The Mekong River begins in China and runs through China, Myanmar, Laos, Thailand, Cambodia and Vietnam before emptying into the Mekong Delta of the Pacific Ocean. The river is home to intense rapids and beautiful waterfalls, and it provides a major route for trade in Asia. Cruise the Mekong and stop in tiny fishing villages and at Angkor Archaeological Park to learn about its ancient temples. 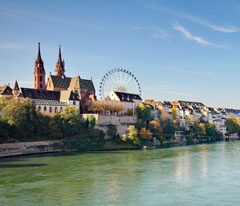 Starting in Switzerland, the Rhine River flows north through Liechtenstein, Austria, Germany, France and the Netherlands, where it empties into the North Sea. There are many historic castles and forts along its banks from the days of the Holy Roman Empire, as well as the many vineyards of the Rhine wine region in Germany. Visit the fairytale landscapes and multi-cultural cities as you sail down the Rhine, learn about UNESCO Heritage Sites and visit the magnificent Rhine Falls.

The Lena River is the third largest in Asia. It runs north from its source in the Baikal Mountains and empties into the Arctic Ocean. The river is home to a variety of flora and fauna, but only for about five months. The rest of the year, the river delta is frozen tundra. Visit (in summer) to learn about the prehistoric peoples and animals that inhabited its shores, and visit fishing villages for a glimpse of daily life in the Arctic region on your Lena River cruise. 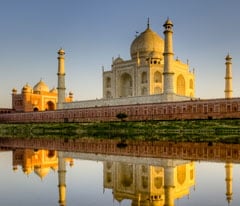 Discover some of the world’s most iconic landmarks with experts and sail a modern riverboat along the holy Ganges River to vibrant cities, religious sites, ancient palaces and the Taj Mahal. Delve into the spiritual meaning of this river on a voyage to its hidden places, plus experience its vital importance in day-to-day life. 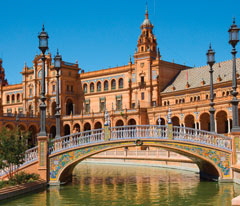 The Guadalquivir runs from the Sierra de Cazorla in Southern Spain to its mouth in the Atlantic Ocean. The name of the river comes from the Arabic word for “great valley.” It serves as a mode of transportation and trade for southern Spain. Its shoreside ecosystem is home to one of the richest flora and fauna in Europe. Sail along the Guadalquivir River to Seville to walk its cobblestone streets, explore its magnificent cathedral and visit the tomb of Christopher Columbus. 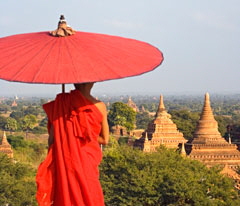 The Irrawaddy River flows from north to south through Myanmar and is the country’s largest river. It empties into the Adnaman Sea. It is famous for its mention in Rudyard Kipling’s Poem “The Road to Mandalay,” has been a major route for trade and transportation for centuries and is an important source of irrigation for the country’s rice paddies. Cruise on the Irrawaddy River to visit the pagodas and Buddhist temples left behind by empires of the past and learn about the Pagan Dynasty’s 250-year rule. 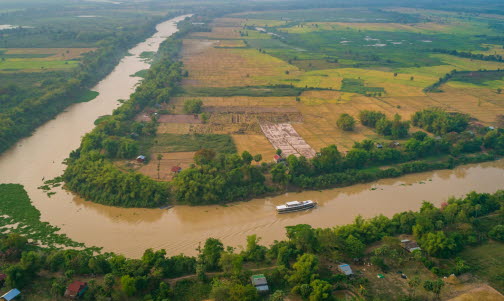 River Boat Cruises in the USA

Discover Europe from a new point of view on a river cruise, as you explore historic capitals, local villages and more.

Learn about engaging topics from Civil War history and steamboat navigation to Cajun cooking and soulful jazz along the Mighty Mississippi. 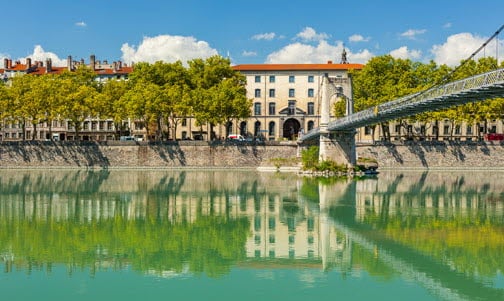 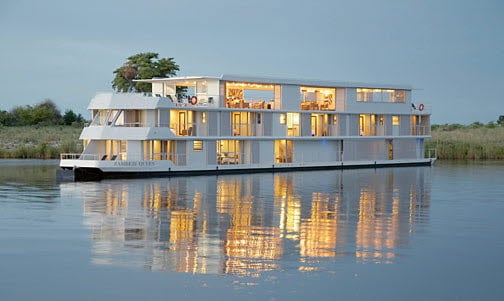 Experience nature at its grandest on a river safari in Southern Africa, or learn about the legacy of the Egyptian Empire along the Nile. 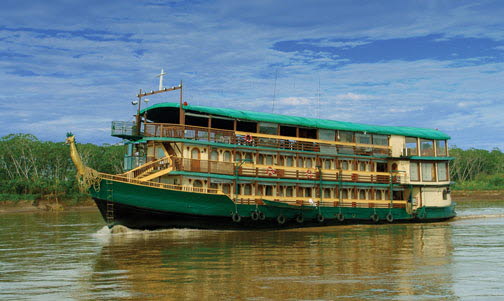 Spend your days onboard an Amazon cruise watching for wildlife along the shores as local experts and naturalists unveil the secrets of the world’s largest rainforest.