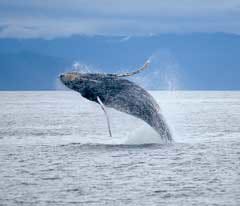 One of the most easily accessible destinations for expedition cruising, Alaska has it all. Expedition ships with shallow drafts can sail the Inside Passage’s temperate rainforest and narrow fjords to learn about the stunning diversity that thrives here. Get up close to immense glaciers and spectacular wildlife as the experts on board the ship offer immersive, detailed commentary on the wonders you see. Hike, kayak and paddleboard throughout some of the country’s iconic scenery with opportunities to access remote places that are generally off limits. This also provides more opportunities to watch for wildlife on the shore such as black and brown bears, moose and seals.

These cruises primarily sail through the many culture- and wildlife-rich islands of the Inside Passage. Alaska’s true beauty lies where nature reigns supreme in Glacier Bay National Park, Tracy Arm Fjord and Hobart Bay. Smaller expedition ships are able to get you up close to the action in shallow outlets and narrow fjords with their onboard Zodiacs and sea kayaks. Set out on expeditions both on land and sea to create an immersive experience with nature as bald eagles fly overhead, black bears feast on salmon and humpback whales break the tension of the water’s surface.

Journey along the majestic Canadian coast and St. Lawrence Peninsula to grand National Parks and remote villages in tune with their natural environment stretching from the provinces of the Canadian Maritimes to far-flung Arctic islands. Venture beyond the fjord-lined coast of Newfoundland and Labrador to the spear-like peaks of Torngat Mountains National Park and into the mystifying Arctic Circle. Circumnavigate Newfoundland to the ancient Viking site of L’Anse aux Meadows and to tiny island outposts nestled within intimate bays and coves. For a more rugged expedition, meet the locals of Arctic enclaves to embrace the region’s beauty and challenging way of life. As your expedition whisks you towards a new world, don’t forget to keep your eyes peeled for the vibrant wildlife that thrives here including whales, puffins, reindeer and more.

Journeying to Atlantic Canada is to experience a region and peoples who have been molded by this extreme outpost. Experiencing this territory typically begins in St. John’s, Newfoundland or with a charter flight from Toronto to a more remote location where you will embark the expedition ship. Expeditions to Canada’s northern reaches often combine Baffin Island with the east coast of Greenland for a truly unique experience. In the Maritime Provinces — New Brunswick, Prince Edward Island and Nova Scotia — and Newfoundland, expedition cruises regularly sail round trip from St. John’s or up the St. Lawrence River from Québec City. 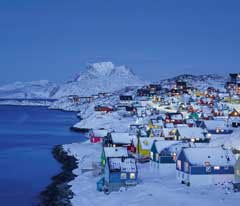 When the first men stepped foot in Iceland, much of Europe still believed the world to be flat. The natural landscape they stumbled upon was a volcanic wonderland home to Europe’s largest glacier and streams leaking from the Earth among natural hot springs. Farther to the west, populations living on Greenland have ebbed and flowed for thousands of years, but immense glaciers continue to calve into towering fjords. Contrast the colorful hues of these two islands’ northerly villages with the stunning natural beauty that exists along and above the Arctic Circle. Learn how these communities thrive under extreme conditions while getting up close and personal to icebergs, geothermal features and snow-capped mountains.

Iceland — colloquially known as the “Land of Fire and Ice” — is easily reached through its capital, Reykjavik, the port of origin for most cruises in the region. Cruises sailing from Reykjavik combine a land portion with can’t-miss sites like the Blue Lagoon and Golden Circle. Whether circumnavigating Iceland to Húsavík, Akureyri and the Westfjords region or departing on a more in-depth exploration of a smaller portion of Iceland’s wondrous coast, you’ll be left amazed and inspired. Cruises to Greenland often depart from Reykjavik and navigate around the southern tip towards Nuuk, the Ilulissat Icefjord and the massive Eqip Glacier before returning to Iceland or continuing south to Canada. 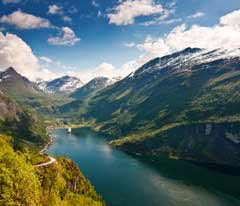 As waterfalls cascade down endless fjords and quaint fishing villages are nestled on narrow outlets, Norway is an artist’s dream and outdoor enthusiast’s playground. From the brightly colored harbors of Bergen and Ålesund to the Arctic wonderland of the Lofoten Islands, coastal Norway is an unlimited treasure trove. Hike among pristine mountains to artistic hubs and venture into the Arctic tundra to meet Indigenous peoples to learn about their lifestyle. With the shallow draft of the expedition ship, journey into the narrow fjords to delight in magical scenery that has helped develop modern-day Scandinavian culture. Viking influences — centered in the ancient capital, Trondheim — have helped make Norway a place of legends old and new. Far above the Arctic Circle, the remote archipelago of Svalbard maintains a small year-round population that pales in comparison to the expansive glaciers and frozen tundra. One of the world’s northernmost inhabited areas, polar bears reign supreme while reindeer and Arctic foxes are adapted to the harsh conditions.

Cruises depart from Bergen and navigate the entire Norwegian coastline as far as Kirkenes, on the Russian border, before returning south. Typical itineraries navigate through fjords and coastal islands while making port in Ålesund, Trondheim, the Lofoten Islands and Tromsø. To reach Svalbard, the most efficient way is to fly to Longyearbyen and step directly into an Arctic wonderland. Once in Longyearbyen, cruises navigate the coves and fjords of Spitsbergen — the archipelago’s largest island — to glaciers and national parks on Arctic safaris. 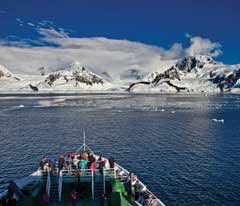 Located at the end of the world, Antarctica is the ultimate destination for any adventure seeker. The seventh continent has remained unchanged since the British National Antarctic Expedition first discovered it in 1901. With no permanent year-round residents, wildlife prospers in this snowy desert and continue about their daily routine unperturbed by their new visitors. Beneath the surface, the Antarctic’s true diversity becomes apparent as penguins and seals are trapped in an eternal dance and whales feast in the krill-rich waters. Come ashore to this frozen wonderland by Zodiac to admire the serene icescapes and the adaptations it takes to thrive in such extreme conditions. On the outlying islands of the South Shetland Peninsula, explore international scientific research stations in the world’s largest scientific preserve dedicated for peace and science.

Reaching Antarctica is no easy task but once you set foot on the seventh continent, the entire journey will be worth it. The 500-mile crossing from Cape Horn to the South Shetland Islands — crossing the infamous Drake Passage — is the shortest distance to Antarctica from any other landmass. Known as the gateway to Antarctica, Ushuaia is the most common port of departure, located in the Argentinian Tierra del Fuego. When flying to the southernmost city in the world, most Antarctic cruises will include airfare from Buenos Aires, Argentina, or Santiago, Chile. Another common point of departure is the Chilean city of Punta Arenas, located on the Strait of Magellan. To reach Antarctica, you have two options:

As the only continent in the world with no permanent residents, Antarctica is governed by the international Antarctic Treaty that has been put in place to protect the fragile ecosystem. While ships carrying 500 or more passengers are allowed to sail in Antarctic waters, they are not allowed to bring their guests ashore. Smaller ships are allowed to bring a maximum of 100 passengers ashore at a time and are restricted to one ship per landing site. Once ashore, there must be a minimum of one expedition leader for every 20 passengers. 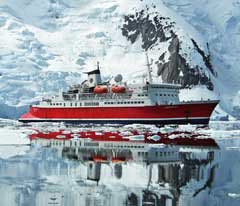 Go where nature leads on a rugged expedition ship that brings you close-up to wildlife and natural wonders. With no set schedule, your captain charts a general course determined by weather, sea conditions and recent wildlife sightings.

At Road Scholar, our expedition cruise programs can bring you across the world. With a diverse cohort of shipmates, you’ll be able to learn and discover the wildlife, landscapes, and cultures around you. From riverboat cruises to ocean voyages and expeditions, we have several cruise programs to choose from.

35+ Number of educational expeditions with Road Scholar See them all

“Once again, Road Scholar hit it out of the park with this one. We got up close and personal with the wildlife and beauty of the Galápagos. Exploring aboard the Endeavor II was an absolute delight. Our journey to Machu Picchu was icing on an already-perfect cake.”