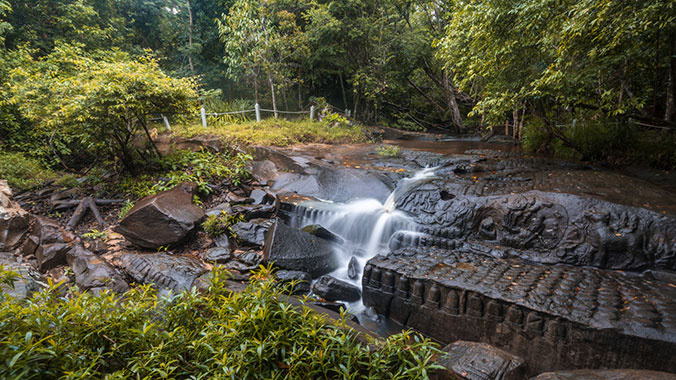 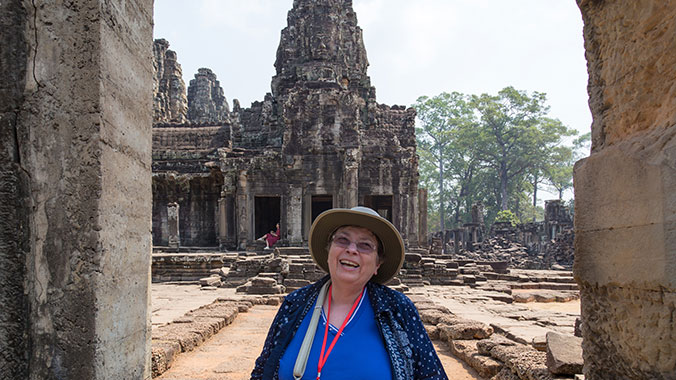 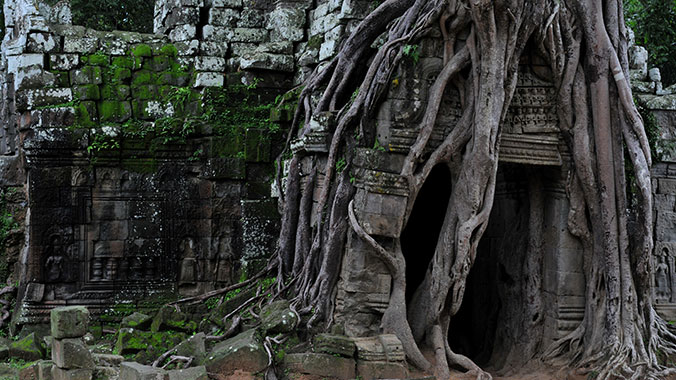 Wishlist Share Start
Continue your learning adventure with a four-day extension to Cambodia. Visit four ancient temples of Angkor and learn about their significance for the Khmer people.
Rating (5)
Activity Level

Extend your learning adventure with a four-day excursion to Siem, Reap, Cambodia. Watch the orange sky melt into yellow and deep magentas as the sun sets behind the staggered temple towers of Angkor, the same stunning scene that Khmer people have gazed upon for over one thousand years. Learn about the historical and religious significance of the ancient ruins at the Angkor National Museum and visit these astounding sights in person.

To take this extension, enroll in this main program first.

Enjoy comfortable walking adventures throughout Vietnam, beginning in the capital city of Hanoi and ending Ho Chi Minh City — Saigon. Explore villages, citadels, bays and more!
Activity Level
Outdoor: Spirited
Walking up to 7 miles (up to 4 hours) a day on varied terrain in a warm climate with some uphill and stairs.

Activity note: Flight from Saigon to Siem Reap today is included in the program cost. Flight is around 1 hour total. Hotel check-in available at 2:00 p.m.

Afternoon: Arrive Siem Reap and check into our hotel. Afterwards, take a field trip to the Angkor National Museum. This new national museum will provide us with an informative introduction to the temples and their art.

Dinner: 'Welcome Dinner' at or near the hotel. Meals are usually a set menu with 4-5 different Asian dishes and served family style.

Evening: Take in our first experience of the temples at sunset with a visit to Angkor Wat. A UNESCO World Heritage Site, Angkor Archaeological Park contains the magnificent remains of the different capitals of the Khmer Empire, from the 9th to the 15th century. As the best-preserved temple at the site, Angkor Wat, is the only temple to have remained a significant religious center since its foundation is Hindu - dedicated to the god Vishnu - then Buddhist. The temple is at the top of the high classical style of Khmer architecture.

Activity note: Walking this day is proximately 3 miles total (1.5 miles one way) with uphill walking to Kbal Spean. Trails will require stepping on big boulders and walking over roots and some loose gravel. There are also two sets of wooden stairs of about 50 steps. The train is shaded through the forest.

Morning: This morning, we take a motor coach to the start of our hike to Kbal Spean, also known as the River of 1000 lingas. This is also the beginning of the Siem Reap River. Hike up hill for about 1.5 miles through rich forests before reaching River of 1000 lingas. Learn about the mythology behind this river bed. Then hike back to the bottom of the hill and board the bus and transfer to lunch.

Afternoon: Explore the Landmine Museum and learn about what is being done to help land mine victims. Then continue to visit the temple Banteay Srei, the Citadel of Women. The Citadel of Women, a pink sandstone temple, was built in the latter half of the 10th century by Rajendravarman II and Jayavaraman V. The carvings of Banteay Srei are among the oldest and most intricate that we will see.

Dinner: Dinner on our own to sample local fare. The Group Leader is happy to offer suggestions.

Activity note: Walking on this day is approximately 7 miles in warm climate but mostly through shady paths. Walking includes ancient sites and forested areas from one temple to another. The walking though is relatively flat but you have to pass through a stream.

Morning: Coach to Angkor Thom and explore this temple, the last and most enduring capital city of the Khmer empire. Established in the late twelfth century by king Jayavarman VII, at the center of the city is the mesmerizing temple of Bayon. From here walk approximately 3 miles to Ta Prohm through the Angkor Trails. Then explore Ta Prohm the Jungle Temple. Unlike most of the temples of Angkor, Ta Prohm has been largely left to ruins. With its dynamic interaction between nature and man-made art, this atmospheric temple is a favorite for many - who can't help but feel a little like Indiana Jones or Lara Croft (which was filmed here) as they pick through the rubble.

Afternoon: Free time to explore Siem Reap on our own.

Evening: At leisure. Pack and prepare for departures home tomorrow.

Breakfast: At the hotel. Program concludes.

Morning: Transfer to the airport for onward travels home. If you are returning home, safe travels. If you are staying on independently, have a wonderful time. If you are transferring to another Road Scholar program, detailed instructions are included in your Information Packet for that program. We hope you enjoy Road Scholar learning adventures and look forward to having you on another rewarding program in the future. Don’t forget to join our Facebook page and follow us on Instagram. Best wishes for all your journeys!

Meals
7 Meals
3 Breakfasts
2 Lunches
2 Dinners
The following choices may be available when requested in advance: Vegetarian, Gluten Free, Low Fat, Low Fat
Lodging
Lodgings may differ by date. Select a date to see the lodgings specific to that date.
Dec 19, 2020 - Dec 22, 2020
Tara Angkor Hotel
3 nights
Siem Reap
The Tara Angkor is equipped with modern amenities and elegantly furnished to make your stay luxurious and enjoyable. With exceptionally warm hospitality and traditional Cambodian sincerity and kindness your stay will be something not to be forgotten.
TripAdvisor Reviews
See All Lodging Options
5 Reviews
Sort by
Most Recent
5 Average

This extension was a great addition to the Vietnam trip that we took. It was quite different from the first program and I would recommend that anyone who takes the Vietnam trip add this on. It gives you a whole different perspective and it enriched the Vietnam experience to see another Southeast Asian country. Plus, the temples are not to be missed.

I can't imagine NOT having taken this extension. Angkor Archaeological Park had been on my dream list for quite awhile, and finally experiencing this amazing temple complex was a dream come true. Our guide, Chum, was truly outstanding. He was the perfect host for his country, providing that extra special touch of sharing both personal and academic information and always offering individualized assistance. He navigated our small group of 8 to be at the right place at the perfect time, ie. sunset, sunrise, before the heat, etc. The Cambodian people of Siem Reap were an added bonus, with their smiles and willingness to be of assistance. Saving the best part of a three week trip for last was definitely the icing on the cake for me. The only thing I would do to improve this extension would be to add a day or two as I felt we only touched upon the highlights of this amazing location.

Remus, MI
This reviewer did not give a star rating. 10 months ago

Awesome! I can't recommend this extension to the Walking Viet Nam tour highly enough. Beautiful and outstanding. The temple ruins are both truly amazing and equally humbling at the same time. I love the opportunity to have my mind reopened to the fact that the current humans aren't the only ones who are able to do seemingly impossible things. Our guide Tohn was exceptional with his breadth of knowledge and experience. My only regret was that the tour was over too soon.

Angkor Wat deserves it reputation as a World Heritage Site. The temples are incredible. A great extension to the Walking Vietnam program.

This program extension was an ideal add-on to the Walking Vietnam tour. Our guide, Thuon, was excellent. There was adequate time to explore the archeological sites. The tour of the Landmine Museum was sobering and will long be remembered. The cost of 5-star tourist hotels in Siem Reap is quite low. I think our accommodations, while more than adequate, could be upgraded at no additional cost.