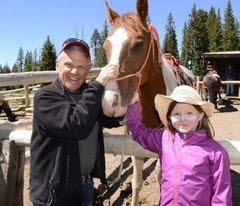 Hear from the experts themselves.

We’re the leaders in grandparent travel and we’re happy to say it. Sharing your own love and passion for travel and learning can instill those same passions in your grandchild forever. And the memories made and the bond built during an educational travel experience can last a lifetime. Read through our blog for advice on how to inspire a sense of adventure in your grandchild, tips for traveling with grandkids and much more!

“I made a promise to show them the world.” 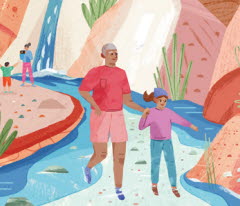 After months of planning, hours of packing and perhaps a long journey, you’ve arrived on your adventure with your grandchild. Now how do you maximize the learning and fun? Our 10 tips have you covered for the week ahead.

“Larry Gets Lost in…” series by Michael Mullin

Sometimes getting lost is the best way to explore a new city! Larry the pup and his owner, Pete, agree. Join them in some of America’s greatest cities and states as they discover adventure wherever they go.

“The Adventures of Beekle: The Unimaginary Friend” by Dan Santat

Follow the adventures of Beekle from a magical, faraway island of imaginary friends to the bustling city as he searches for his perfect match.

“Roberto’s Trip to the Top” by John B. Paterson Jr.

Join Tío Antonio and Roberto as Roberto makes his first trip without his parents to the top of the mountain overlooking his village in Venezuela.

When Trixie and her family travel to Holland to visit her grandparents, she leaves her stuffed bunny behind on the plane! But imagining Knuffle Bunny’s travels cheers her up until they’re reunited.

“Biblioburro: A True Story from Colombia” by Jeanette Winter

Luis loves to read so much that he soon has more books than can fit in his house, so he sets out with two donkeys to deliver books to children in villages far and wide.

Amelia and her family are on a road trip back to California to see her best friend from kindergarten, stopping at the Grand Canyon and Yosemite along the way. Read about her trip in her travel notebook!

In this Newbery Medal-winner, 13-year-old Sal travels across the country to Idaho with her grandparents, filling the time by telling stories of her friend Phoebe Winterbottom. Also check out Creech’s other adventure and travel novels like “The Wanderer.”

“The Adventures of Tintin” by Hergé

Go graphic with the Adventures of Tintin and follow a young Belgian reporter and his dog, Snowy, on their around-the-world adventures both realistic and fantastic in these comic albums that date back to 1929.

“Around the World in 80 Days” by Jules Verne

Phileas Fogg accepts a £20,000 bet from his friends in London and sets out with his French valet to circumnavigate the world in 80 days, finding action and adventure at every turn along the way.

A story on many levels, “The Little Prince” has a little something for both of you and will grow with your grandchild. Follow this little alien’s travels from one planet to the next as he meets a cast of unusual characters.

Follow the four unusual misadventures of Lemuel Gulliver, a ship’s surgeon, as he sets out on a voyage that takes him to a world in miniature, a land of giants, a flying island and a land of gentle creatures and beasts.

“Robinson Crusoe” is a classic that you probably read when you were a kid, and maybe your grandparents before you. Now share with your grandchild the story of a man who spent 28 years as a castaway on a Pacific Island.

“The Alchemist” by Paulo Coelho

This magical story follows Santiago, an Andalusian shepherd boy, on his search through the Sahara desert to find treasure in the pyramids of Egypt in a story about dreams and finding your purpose in life.

“The Adventures of Huckleberry Finn” by Mark Twain

Float down the Mississippi River with Huck, a wily teenager from Missouri, and Jim, a runaway slave, and delight in the adventures they find along the way. Abridged versions are also available for younger grandkids.

The Leader in Educational Travel for Adults Since 1975