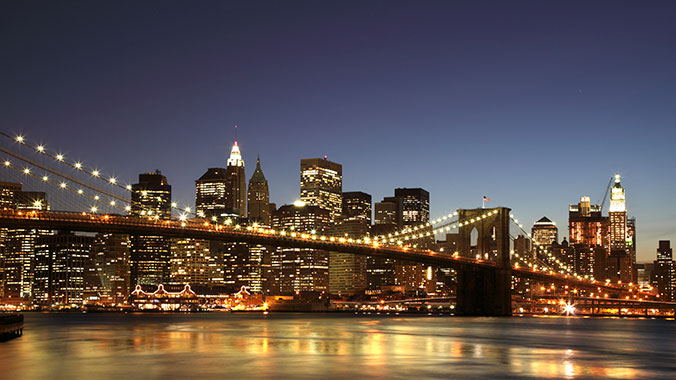 Signature City New York: A Short and Sweet Stay in the Big Apple 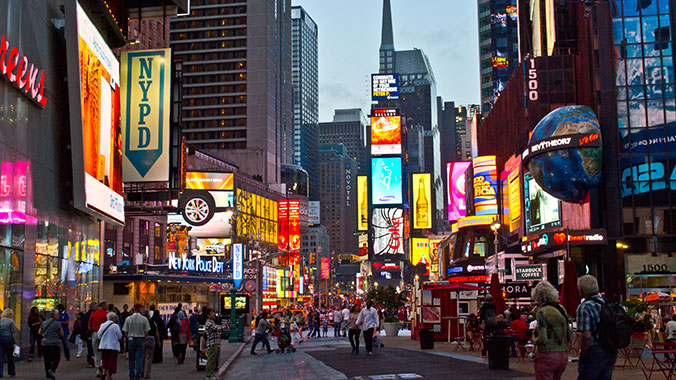 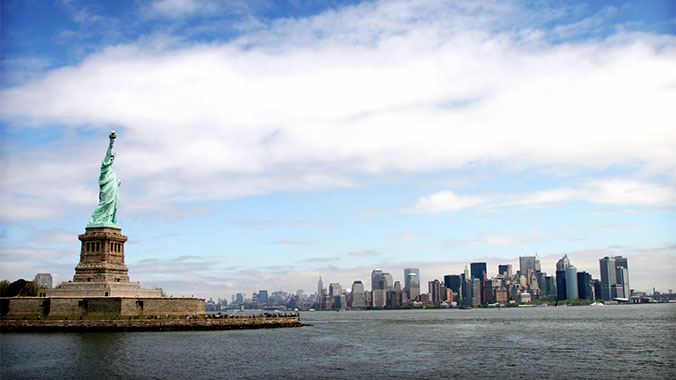 Wishlist Share Start
New York, New York! From the amazing collections of the Metropolitan Museum of Art to a ferry ride to Ellis Island and the Statue of Liberty, experience the Big Apple’s pulsing energy.
Rating (5)
Activity Level

Whether you’re a first-time explorer or a former New Yorker curious about your old haunts, experience the history, culture and amazing energy of the Big Apple. Trace the story of New York City from its Dutch beginnings to its time as capital of the new United States and on to a discussion of what the future holds. Learn about the city’s architecture, economy, diversity and politics. Expert-led field trips give you an insider’s view of New York City’s best known icons.
Activity Level
Let's Go!
Walking 2-5 miles per day with lots of stairs. Public transportation used exclusively throughout program.

There are lots of different ways to explore New York City depending on your preference of pace, program inclusions and time available for travel. Visit www.roadscholar.org/collections/nyc to explore them all!
Featured Expert
All Experts

Richard Turnbull
Richard Turnbull is an assistant professor in the History of Art Department at the Fashion Institute of Technology in New York, and lectures regularly at the Metropolitan Museum of Art and the Museum of Modern Art. He has published numerous articles on topics from the challenges of being an adjunct professor to the photography of Luke Smalley, and has forthcoming articles on Islamic art and 70s pop music and culture. Richard earned his Ph.D. in art history from the Institute of Fine Arts.

Mike Grant
View biography
<%= Bio %>
Suggested Reading List (13 books)
Visit the Road Scholar Bookshop
You can find many of the books we recommend at the Road Scholar store on bookshop.org, a website that supports local bookstores.
Search for a Title
The Island at the Center of the World
by Russell Shorto
Downtown: My Manhattan
by Peter Hamill
Razzle Dazzle: The Battle for Broadway
by Michael Reidel
Mannahatta: A Natural History of NYC
by Sanderson & Boyer
Time and Again
by Jack Finney
The Big Oyster
by Mark Kurlansky
Harlem
by Jonathan Gill
Great Fortune: The Epic of Rockefeller Center
by Daniel Okrent
722 Miles: The Building of the Subways and How They Transformed New York
by Clifton Hood
American Passage
by Vincent Cannato
Let The Great World Spin
by Colum McCann
New York
by Edward Rutherford
Here Is New York
by E. B. White
Start Enrolling

Afternoon: Program Registration: 4:00 p.m. The location of our Road Scholar meeting room will be posted in lobby on an LED board across from the Security Desk. Come to the meeting room to register with the program staff and get your welcome packet containing your up-to-date schedule that reflects any changes and other important information. If you arrive late, please ask for your envelope when you check in.

Dinner: 5:00 p.m. In the Tick Tock Diner just off the lobby of our historic hotel, we’ll have our first meal together and order from a select menu. This 24-hour diner features American cooking and “comfort food.” Dinner in the diner is included even if you arrive late. You may eat later but please attend Orientation first. Or, get takeout and bring your plate to the meeting room.

Evening: Orientation: 6:15-7:30 p.m. In a hotel meeting room, the Group Leader will greet everyone and lead introductions. We will review the program theme, the up-to-date daily schedule, discuss roles and responsibilities, logistics, safety guidelines, emergency procedures, and answer questions. Dinners are early in order to have plenty of time available for engaging in evening activities as a group and individually. We will be walking a lot and using the New York City subway system that involves going up and down flights of stairs, long corridors, and often crowded conditions. It’s what New Yorkers do every day! Periods in the daily schedule designated as “Free time” and “At leisure” offer opportunities to do what you like and make your experience even more meaningful and memorable according to your personal preferences. The Group Leader will be happy to offer suggestions. Program activities, schedules, personnel, and indicated distances or times may change due to local circumstances/conditions. In the event of changes, we will alert you as quickly as possible. Thank you for your understanding. After orientation, we will walk over to the Empire State Building. From the 86th floor observation deck, we’ll have a bird’s eye view of the Manhattan street grid and all five boroughs with New Jersey in the distance (weather permitting). It’s a great way to orient yourself to New York’s geography and get your first “big picture” look at the city. The Empire State Building is just three blocks away. Our group leader will escort you there and you may return on your own when you please.

Breakfast: In the hotel meeting room, we’ll have bagels, muffins, bananas, hard-boiled eggs, cold cereals, cream cheese, jelly, butter, plus milk (regular/low-fat), orange juice, coffee/decaf, tea, water. During breakfast, we will register with the MTA for a senior citizen MetroCard (if you are 65 or over). A representative from the MTA will take your picture and a copy of your driver’s license to process your permanent MetroCard application. They will give you a temporary card to use for the week, enabling you to ride for half price. A few weeks after you return home you will receive a permanent card in the mail — your official invitation to come back to New York and ride around for half price. If you have been on a previous program and have a senior citizen's MetroCard, please bring it with you.

Morning: We’ll be joined by an architectural historian for a lecture on the history and architecture of New York City. We’ll begin to gain an understanding of all the five boroughs it comprises — the Bronx, Brooklyn, Manhattan, Queens, and Staten Island — each with its own history, personality, and appeal. With our local expert, we’ll then take the subway to Fifth Avenue where we’ll make a brief stop to visit St. Patrick’s Cathedral before arriving at Rockefeller Center. This remarkable complex is the legacy of John D. Rockefeller, Jr. It opened in 1933 in the depths of the Great Depression as both a business venture and a manifestation of the belief that public art is an act of good citizenship. The art deco motifs and sculptures were intended to signify human development in spirit, science, industry, and more.

Lunch: We’ll have vouchers for a Rockefeller Center eatery.

Afternoon: We’ll have an expert-led exploration of Radio City Music Hall, an Art Deco masterpiece. We’ll go behind the scenes and learn the history from movie palace to the concert venue of today. We may even meet one of the world famous Rockettes! We’ll marvel at the art, architecture, engineering, and learn what about it was considered a top government secret during World War II.

Dinner: At a neighborhood Chinese restaurant, we’ll have a family-style meal with choices of soup, appetizers, and entrées; tea, water included, other beverages available for purchase.

Evening: To prepare for tomorrow’s field trips, we’ll have an introduction to Ellis Island and the Statue of Liberty.

Activity note: Taking the subway to the ferry for traveling to/from the islands. Walking approximately 5 miles; city streets and sidewalks.

Breakfast: In the Tick Tock Diner, we’ll order from a select menu. You can choose eggs with sides, waffles or pancakes, or if you prefer healthier fare, fresh fruit and yogurt.

Morning: We’ll head straight out this morning to take best advantage of our time on Liberty and Ellis Islands where you may explore both iconic islands at your own pace to see and do what interests you most. We’ll begin by boarding the ferry to Liberty Island. Liberty Island features a brand new state of the art museum dedicated to the statue. It is not to be missed. Additionally, you may choose to stroll around the island while listening to the included audio guide or join up with a NPS Ranger. The Statue of Liberty was an amazing gift to the people of America from the people of France — our oldest ally — celebrating freedom and democracy. We’ve seen this national monument in countless movies and TV shows and may even take it for granted, but on the Fourth of July 1884, it was the biggest event in the country. Years later, these words of poet Emma Lazarus were added: “Give me your tired, your poor, Your huddled masses yearning to breathe free, The wretched refuse of your teeming shore. Send these, the homeless, tempest-tost to me, I lift my lamp beside the golden door!” With the opening of the new museum, our tickets do not include entry into the pedestal or the statue. If this is something you would like to do, these tickets may be arranged separately, in advance of the program and at your own cost via the NPS exclusive ticket seller: www.statuecruises.com. Be aware that choosing to arrange this for yourself will require a great deal more time on Liberty Island and will necessarily reduce your time on Ellis Island.

Lunch: This meal has been excluded from the program cost and is on your own to enjoy what you like. Both Liberty and Ellis Islands have cafeterias, with larger facilities and selections available on Liberty Island.

Dinner: At a restaurant in Little Italy, we’ll order plated meals from a select menu with beverages choices of soda, coffee, tea, water; other beverages available for purchase.

Evening: Before we return to the hotel, we’ll have some independent time in this iconic neighborhood. When people came from other countries, they brought their language, customs, and favorite foods. You might like to taste an authentic Italian pastry or some gelato. Returning to the hotel, prepare for check-out and departure in the morning.

Breakfast: In the Meeting Room. This concludes our program.

Meals
7 Meals
3 Breakfasts
1 Lunch
3 Dinners
The following choices may be available when requested in advance: Vegetarian, Gluten Free
Lodging
Lodgings may differ by date. Select a date to see the lodgings specific to that date.
Sep 26, 2021 - Sep 29, 2021
New Yorker Hotel
3 nights
New York
This Art Deco masterpiece opened in 1930. All of New York is at your doorstep, across from Madison Square Garden and Penn Station, Macy's and the Empire State Building are just down the street with the Theater District a few minutes walk. The hotel features a business center and fitness center.
TripAdvisor Reviews
See All Lodging Options
1 Reviews
Sort by
Most Recent
5 Average

Continue
Choose Your Airfare
The prices shown here are for airfare only. When you select your airfare, your total price will be updated on the Dates & Prices page.
Choose an airport
May 16 -
May 19, 2021
Sep 26 -
Sep 29, 2021