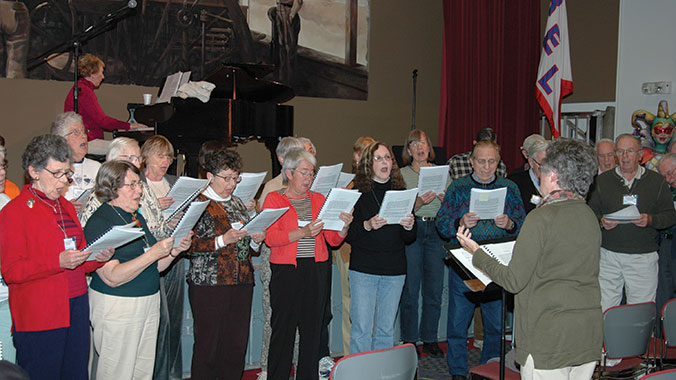 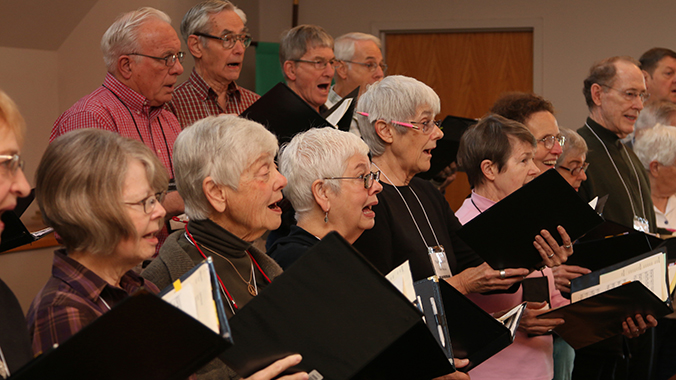 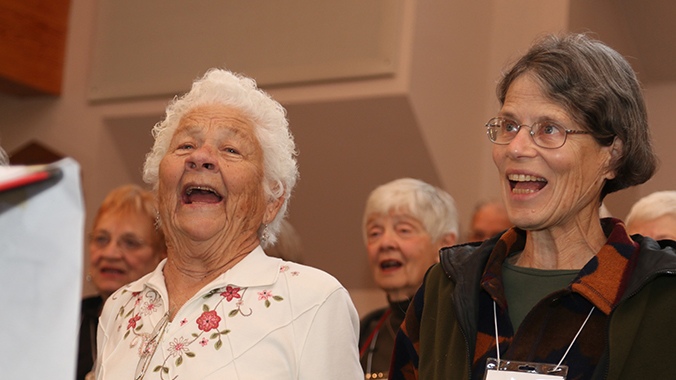 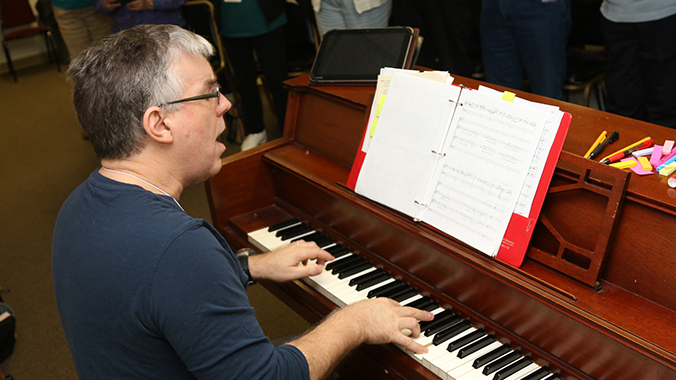 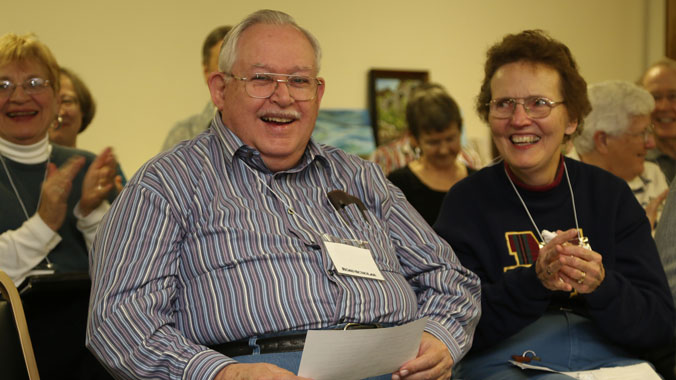 Wishlist Share Start
Learn great choral music, practice with experts, enjoy a theater production and get inspired by the natural beauty of the Appalachian Highlands on this music-lover’s adventure.
Rating (5)
Activity Level

Lift up your voice with other singers from around the U.S. as you join us for a week filled with music in the beautiful Appalachian Highlands of Virginia! Whether you’re a novice singer or an accomplished vocalist, you’ll enjoy an opportunity to rehearse new hits, exciting arrangements and classic compositions. Along the way, learn about the works of some of our favorite composers and prepare for a final concert with your new musical friends. A bit of free time offers the opportunity to explore the region, known for its natural beauty, rich history and arts and crafts scene.
Activity Level
Easy Going
Singing and rehearsing up to six hours per day. Participants should be able to stand for up to one hour.

The Retreat Difference: This unique, often basic and no-frills experience at a Road Scholar Retreat includes opportunities for early morning exercise, interaction with the local community for insight into local life, an authentic farm-to-table or locally sourced meal, a live performance or event, and a value-priced single room. Due to the nature of this program, listening devices are not available.
Featured Expert
All Experts

Andrew Walker
Originally from the United Kingdom, Andrew Walker strives to use and develop his musical skills in ways that benefit those whom he leads, instructs, and ministers to. He holds a Bachelor of Music with Honors from the University of London-Royal Holloway College, England. He is an accomplished clinician, conductor, and songwriter and is also a member the American Guild of Organists and the Association of Anglican Musicians. He has been the Director of Music at St. Michael’s Episcopal Church in Orlando, Florida, since 1980.

Andrew Walker
View biography
<%= Bio %>
Suggested Reading List (9 books)
Visit the Road Scholar Bookshop
You can find many of the books we recommend at the Road Scholar store on bookshop.org, a website that supports local bookstores.
Search for a Title
Prodigal Summer
by Barbara Kingsolver
Prodigal Summer weaves together three stories of human love within a larger tapestry of lives inhabiting the forested mountains and struggling small farms of southern Appalachia. Over the course of one humid summer, these characters find their connections to one another and to the flora and fauna with whom they share a place. Prodigal Summer demonstrates a balance of narrative, drama and ideas that is characteristic of Barbara Kingsolver's finest work
Guide to the Crooked Road, A: Virginia's Heritage Music Trail
by Joe Wilson
The Crooked Road is a 253-mile stretch of highway in southwestern Virginia. This remote area, which is one of the places that gave birth to American music, has been a musical hotbed for generations. The route includes the Ralph Stanley Museum, the Carter Family Fold, the Birthplace of Country Music Alliance Museum, the Blue Ridge Music Center, the Rex Theater, the Floyd Country Store, and the Blue Ridge Institute and Museum. Covering the 10 counties through which the road
Exploring American Folk Music: Ethnic, Grassroots, and Regional Traditions in the United States
by Kip Lornell
A reflection on the fascinating diversity of regional and grassroots music in the United States - covering the diverse strains of American folk music - Latin, Native American, African, French-Canadian, British, and Cajun - and offering a chronology of the development of folk music in the United States
The Bristol Sessions: Writings About the Big Bang of Country Music
by Charles K. Wolfe & Ted Olson
In the summer of 1927, nineteen bands gathered for a recording session in Bristol, on the Tennessee-Virginia border, including some of the most influential names in American music--the Carter Family, Jimmie Rodgers, Ernest Stoneman and more. Organized by Ralph Peer for Victor records to capitalize on the popularity of "hillbilly" music, the Bristol sessions were a key moment in country music's evolution. The reverberations of the Bristol sessions are still felt today, yet their influence is widely misunderstood, and popular accounts of the event are more legend than history
Virginia Highlands
by Susan J. Harrington
This book highlights the history of the local region, including Wythe, Smyth, Grayson, and Washington Counties.
Abingdon, Virginia - Then and Now
by Donna Gayle Akers
This book contains around 200 historic photographs taken over the past century of Abingdon’s many well-known town entities, personalities, and businesses. The Stonewall Jackson Female Institute, Martha Washington Inn, and the Barter Theatre are all included in this beautiful celebration of Abingdon’s heritage.
The Virginia Creeper Trail Companion
by Edward H. Davis & Edward B. Morgan
With photos, historic train schedules, and detailed maps, this guidebook enables the user to understand the Virginia Creeper Trail’s origin as an important railroad. Also included are essays on the region’s geology, trees, wildflowers, fish, birds, and mammals. The combination of the historical perspective and the modern natural science in The Companion will enhance the trail experience for anyone who travels the Virginia Creeper Trail. This book is available at the SWVA 4-H Educational Center to read.
Washington County
by Donna Akers Warmuth
Washington County provides an intricate visit to yesteryear, with over 200 historic scenes of this rural region. Highlights include beautiful photos of The Virginia Creeper trains and the communities of Damascus, Meadowview, and Glade Spring.
Big Stone Gap
by Adriana Trigiani
Nestled in the Blue Ridge Mountains of Virginia, the tiny town of Big Stone Gap is home to some of the most charming eccentrics in the state. Ave Maria Mulligan is the town's self-proclaimed spinster. She lives an amiable life with good friends and lots of hobbies until the fateful day in 1978 when she suddenly discovers that she's not who she always thought she was. Before she can blink, Ave's fielding marriage proposals, fighting off greedy family members, organizing a celebration for visiting celebrities, and planning the trip of a lifetime-a trip that could change her view of the world and her own place in it forever.
Start Enrolling

Evening: Orientation to program and facilities. Get acquainted.

Evening: Enjoy an evening of musical entertainment provided by local musicians "Fire in the Kitchen"

Evening: Participants will have the opportunity to sign up to perform their talents during the evening talent show!

Evening: Evening choral practice at the church to prepare for the performance.

Meals
16 Meals
6 Breakfasts
5 Lunches
5 Dinners
The following choices may be available when requested in advance: Gluten Free, Low Fat, Vegetarian
Lodging
Lodgings may differ by date. Select a date to see the lodgings specific to that date.
Nov 09, 2020 - Nov 15, 2020
Southwest Virginia 4-H Educational Center
6 nights
Abingdon
Stay on the scenic grounds of a historic former Virginia Poor Farm at the Southwest Virginia 4-H Educational Center, established in 1958. Guests enjoy comfortable but basic, clean but dated private rooms at the Dickinson Conference Center. Rooms are equipped with adjustable air-conditioning and heat, as well as private bathrooms. Did we mention clean and comfortable? It has everything you need for a relaxing retreat!
See All Lodging Options
5 Reviews
Sort by
Most Recent
5 Average

The content, the instructor, my fellow students and the setting made this a peak experience.

Another great week with friends and new friends alike! Look forward to seeing everyone next year.

I attend 3 different choral workshops annually and I love them all but this one is my #1.

Why do you post an event and deny enrollment for it? I have requested no snail mail of program material, and yet it still comes: a waste oh RS money.

This is a wonderful program. We sing and we bond and we learn. Location is beautiful and the food was great.

Continue
Choose Your Airfare
The prices shown here are for airfare only. When you select your airfare, your total price will be updated on the Dates & Prices page.
Choose an airport
Nov 9 -
Nov 15, 2020
Nov 8 -
Nov 14, 2021