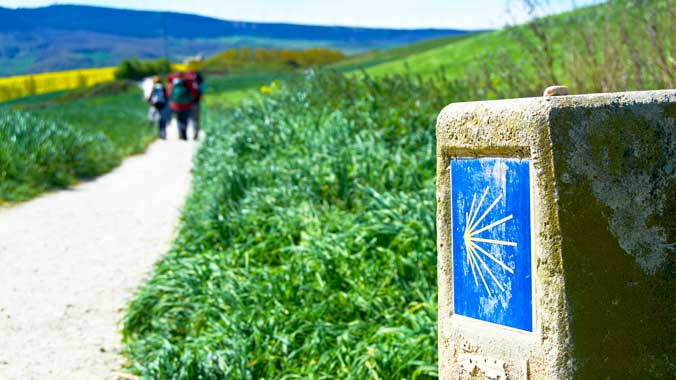 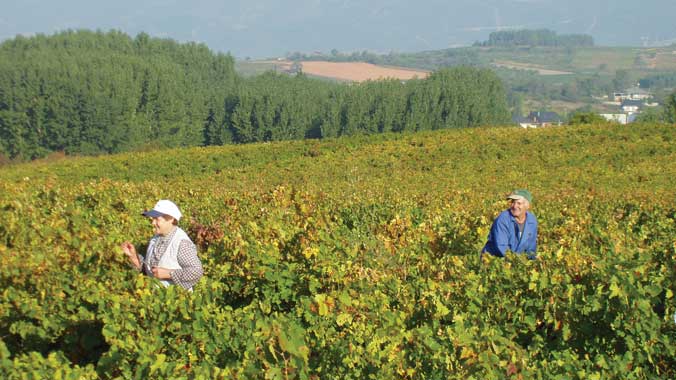 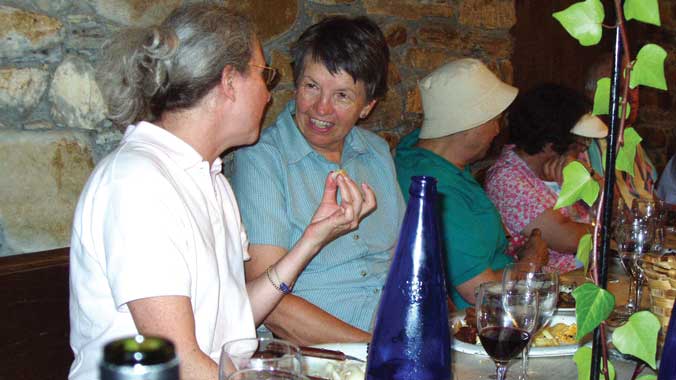 Set off on a legendary pilgrimage along one of the most storied walking routes in human history. Follow along the footpaths, country roads and forest trails that have been traversed by millions of people for centuries. Join our local expert as you learn about this extraordinary route, as you make your way along scenic rivers, past vine-tangled landscapes and through charming Spanish villages strung together by medieval bridges. Learn about towns like Tui, Arcade, Pontevedra and Carril, Pazo Baión and stroll through grand Castles and Cathedrals, to learn about oystering and battles for independence and to taste some local wines. Walk with experts and new friends on a journey that will teach you as much about yourself as about the history and culture of the villages you encounter along the way.

Afternoon: Orientation 6:30 p.m. The Group Leader will greet everyone and lead introductions. We will review the up-to-date program schedule, discuss roles and responsibilities, logistics, safety guidelines, emergency procedures, and answer questions. Unless otherwise noted, dinners on this program are typically a 3-course set menu and lunches on this program are typically a 2-course set menu. Breakfasts will offer a typical European-style breakfast buffet with breads, cheeses, cold cuts, yogurt, fruit, cereals, juice, milk, coffee, tea, and water. Please note that water is included in the program cost at all meals. The Group Leader and a local expert will lead the hikes and walks. Periods in the schedule designated as “Free time” and “At leisure” offer opportunities to do what you like and make your experience even more meaningful and memorable according to your personal preferences. The Group Leader will be happy to offer suggestions. Program activities, schedules, personnel, and indicated distances or times may change due to local circumstances/conditions. In the event of changes, we will alert you as quickly as possible. Thank you for your understanding.

Dinner: We will enjoy a welcome dinner and drink at the hotel. Other beverages available for purchase.

Activity note: Getting on/off motorcoach; driving approximately 25 miles, around 30 minutes roundtrip. Up to 6.2 miles of walking for 2.5 hours on quiet country roads and woodland paths.

Morning: We will drive by motorcoach to O Porriño, the Ribadelouro area. From here, walk through a rural landscape through the natural area of As Gándaras and the Louro River. We will cross this river using the beautiful medieval bridge of Orbenlle, with a single arch. Step by step, we will approach the village of O Porriño. After lunch, we return to the Parador de Tui.

Lunch: At a local restaurant in O Porriño.

Afternoon: Get to know the history of Tui by visiting its cathedral, the cathedral of Santa María de Tui. This Romanesque cathedral dates back to 1120, even though some Gothic architectural details were added later. It was consecrated by King Alfonso IX in 1225. Look for the crenellated tower which lends the cathedral the look of a fortress.

Activity note: Getting on/off motorcoach; driving approximately 35 miles, a little over an hour. Up to 5 miles of walking for 2 hours through a string of hillside villages and patches of woodland.

Morning: We will drive by motorcoach to Redondela. We will leave this small city behind and walk by the Vigo estuary and the San Simón island. Pass through countless villages. The villages alternate with forest paths and finally we will reach the village of Arcade, known for its oysters. Shortly after, we will reach the end of the walk on the beautiful Roman bridge of Ponte Sampaio. At this bridge, an important battle was fought during the Spanish Independence War against French troops.

Lunch: At a local restaurant in Arcade.

Afternoon: From Ponto Sampaio, travel to Soutomaior, very close to the historic bridge. Soutomaior is a medieval castle from the 12th century, which saw the birth of one of the most important lineages in Galicia: the Soutomaior. Visit the Tower of Homage, the walls, moat, and spend time in its garden, where an important collection of camellias, with more than 300 examples of 22 different species, stands out. This place pioneered the diffusion of this Oriental flower in Galicia. After visiting the castle, we will travel to Pontevedra, where we will stay in a historic Parador. Pontevedra is a historic city full of small and quirky squares. This city is a world reference for its successful pedestrianization plan.

Activity note: Getting on/off motorcoach; driving approximately 15 miles, around 30 minutes roundtrip. Up to 4.5 miles of walking for 2 hours on natural and forest trails, watercourses and footpaths.

Morning: In the morning, explore the most interesting corners of the historic quarter of Pontevedra: the church of A Peregrina, with its peculiar shell-shaped base; the squares of A Ferrería, A Leña, Teucro and Verdura; and the Basilica of Santa Maria from the 16th century.

Afternoon: We will leave the city through the O Burgo medieval bridge, crossing the Lérez river, entering a rural landscape. Step by Step we will see that the presence of vineyards is greater, since we are approaching the Albariño wine domains. We will take a small detour along the way to get to know A Barosa River, a beautiful area where its waterfalls and mills stand out. From this point, a transfer will take us to our accommodation for the next two nights: the Torre do Rio hotel, located a stone's throw from Caldas de Reis, in an area dominated by the river. Enjoy the hotel and its beautiful surroundings before dinner.

Activity note: Getting on/off motorcoach; driving approximately 30 miles, around 1 hour total. Up to 6.7 miles of walking for 2 hours on forest trails and footpaths.

Morning: A short transfer will take us to Carracedo, to the beginning of today's walk. Soon we enter a landscape where eucalyptus and oak forests are the protagonists. Finally, we arrive at Pontecesures, the end of today's walk.

Afternoon: Travel by motorcoach along the Ulla River, which forms the impressive Arousa estuary. We continues its course to the town of Carril, where we can see the immensity of the estuary. Learn about the importance of shellfish-gathering for local life and economy. From this point, travel to Pazo Baión, which produces a limited signature wine. We will explore the vineyards and learn about the history of the Pazo buildings, even entering its curious dovecote. End the exploration with a tasting of wines, recognized by Rias Baixas Designation of Origin. Afterwards, transfer to the hotel.

Activity note: Getting on/off motorcoach; driving approximately 18 miles, around 45 minutes roundtrip. Up to 8 miles of walking for 4 hours at a steady uphill, through small villages, and on cobblestones.

Morning: This morning, transfer via motorcoach to Padrón, where we will learn about the two great writers of this area: Rosalia de Castro and Nobel Prize winner, José Cela. We will start walking and will pass by the collegiate church of Iria Flavia; from here, we keep going through A Escravitude and begin to ascend until the end of the stage in O Faramello, where we will visit the impressive Pazo and its gardens.

Afternoon: From here, we move to Santiago de Compostela. A local guide will show us all the secrets and history of this important town. Learn about the cathedral and its surrounding squares. Enjoy some free time before dinner.

Dinner: At a local restaurant in the city.

Activity note: Getting on/off motorcoach; driving approximately 80 miles, around 2.5 hours roundtrip. Walking as much as you like for about 2 hours on coastal roads.

Morning: Today, enjoy a panoramic excursion to Costa da Morte, visiting Cape Fisterra, the Fisterra port, along with other sites in the area such as the impressive Rostro beach or the Muxia Sanctuary.

Lunch: Lunch at a seafood restaurant, overlooking the ocean.

Afternoon: Transfer back to Santiago and enjoy some free time to prepare for tomorrow's departures.

Dinner: At a local restaurant in the historic center of Santiago.

DAY
9
Program Concludes
In Flight
B

Meals
20 Meals
7 Breakfasts
6 Lunches
7 Dinners
The following choices may be available when requested in advance: Gluten Free, Low Fat, Low Salt, Vegetarian
Lodging
Lodgings may differ by date. Select a date to see the lodgings specific to that date.
Sep 27, 2021 - Oct 05, 2021
Hotel Parador de Tui
2 nights
Tui, PO
Hotel Parador de Tui is located in the center of the historic city of Tui, on the border of Portugal and Galicia. Guests enjoy a relaxing atmosphere from which they can set off on many of the outdoor activities the area has to offer.
Hotel Parador de Pontevedra
1 night
Pontevedra
Hotel Parador de Pontevedra is situated in a former palace belonging to Count Maceda in the old quarter of the city. The interior is regal and comfortable, giving guests an ideal place to rest in close proximity to the beauty and history of the surrounding area.
Hotel Parador de Cambados
2 nights
Cambados, PO
Hotel Parador de Cambados was converted from an ancestral mansion in the Albariño wine region. The hotel is located in the old quarter of Cambados, welcoming guests to a peaceful atmosphere in a historical area that is like an open air museum.
Hotel Compostela
2 nights
Santiago de Compostela
Hotel Compostela is housed in a renovated historical building with stunning architecture, and is located in the heart of the city in Galicia Square. The modern design of the interior makes guests feel at home, just a short walk away from all that Santiago de Compostela has to offer.
See All Lodging Options