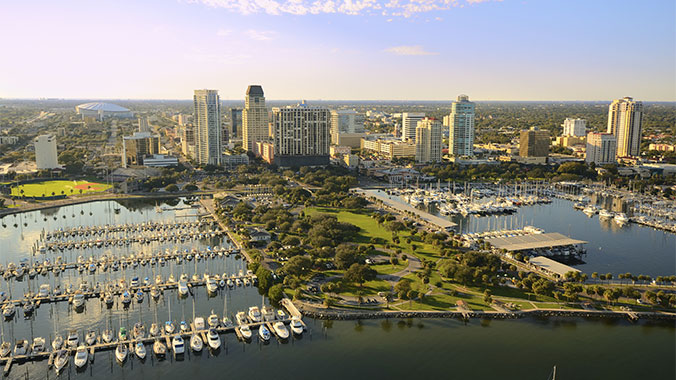 All Hands on Deck! Learn to Sail in Florida With Your Grandchild 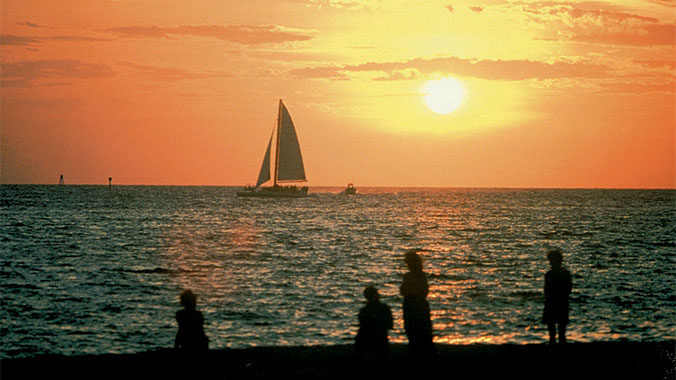 Wishlist Share Start
Set sail on the adventure of a lifetime as you and your grandchild learn how to sail from the experts and meet local fisherman, gawk at glass art, go dolphin watching and so much more.
new
Activity Level

Grab your mainsheet, hoist the sail and get ready to embark on an awesome boating adventure! Alongside your grandchild, learn the ins and outs of sailing with four lessons from the pros at Eckerd College. While gliding through the waves, keep an eye out for marine life just below the surface and learn about life on the water. Listen to stories about swashbuckling pirates before searching for dolphins, and meet a local fisherman who will teach you the ways of the sea. Land ho!
Activity Level
Outdoor: No Sweat

Afternoon: Program Registration: 4:00 – 5:30 p.m. After you have your room assignment, join us at the Road Scholar table in the Flamingo Room to register with the program staff and get your welcome packet containing the up-to-date schedule that reflects any changes, other important information, and to confirm the time and location of the Orientation session. If you arrive late, please ask for your packet when you check in. Orientation: 5:30 p.m. The Group Leader will greet everyone and lead introductions. We will review the up-to-date program schedule, discuss roles and responsibilities, logistics, safety guidelines, emergency procedures, and answer questions. This is a Road Scholar Grandparent program. Grandparents are responsible for their grandchildren. If/when separate age group activities are conducted concurrently, program staff will supervise. Minors are never to be left unsupervised. Periods in the schedule designated as “Free time” and “At leisure” offer opportunities to do what you like and make your experience even more meaningful and memorable according to your personal preferences. The Group Leader will be happy to offer suggestions. Program activities, schedules, personnel, and indicated distances or times may change due to local circumstances/conditions. In the event of changes, we will alert you as quickly as possible. Thank you for your understanding.

Dinner: In the Flamingo Room, we will have a catered meal with salad, main dish, side dishes, rolls, dessert, coffee, hot tea, iced tea, lemonade, water.

Evening: At leisure. Continue getting to know your fellow Road Scholars, settle in, and get a good night's rest for the day ahead.

Activity note: Getting on/off a bus and sailboat. Walking to waterfront on campus, sailing about 3 hours.

Breakfast: In the Eckerd College cafeteria, we will have a full buffet breakfast.

Morning: We will learn to sail from Eckerd College’s beautiful waterfront campus, with local professional instructors, who will have us tacking and jibing in no time. We might even spot a dolphin or manatee while we’re out there! In sailboats of up to six people, we will learn the basic theory and terminology of sailing, rigging, sail adjustment, and maneuvers, with an emphasis on weather and safety.

Lunch: In the Eckerd College cafeteria, we will have a buffet meal including a salad bar, burger station, dessert, pizza, wraps, and chef’s selection of hot dishes. Soft drinks, water included.

Afternoon: We will ride by bus to the 48,000-square foot Imagine Museum to view modern exhibits, made up entirely of glass, many nautical in theme. The museum houses a collection of 1500 pieces from the contemporary American studio glass movement, with a 500-piece display. We may find in these displays of explosive growth and diversification within the movement.

Dinner: At the Red Mesa Cantina, we will enjoy a plated and served meal with Mexican, Latin, and Caribbean cuisine options. Coffee, tea, water included; other beverages available for purchase.

Evening: Back on campus, we will learn how to tie sailing knots with our grandchildren from Eckerd College Waterfront staff.

Activity note: Getting on/off a bus and sailboat. Walking to campus pool, sailing about 3 hours.

Morning: We will rejoin our instructors and vessels to continue with our sail instruction on campus.

Lunch: We will enjoy a meal at Tavern at Bayboro, where we will have a plated meal featuring a signature favorite — a Florida grouper sandwich — with choice of fried, broiled, or blackened (other choices available). Lemonade and water included; other beverages available for purchase. Local fishermen will tell us about grouper as we eat.

Afternoon: After returning to campus, we will learn about local pirate tales from history faculty. Tampa Bay is home to an annual Gasparilla Pirate Festival and Gasparilla Bowl, an NCAA Football game to commemorate a mythical Spanish pirate, Jose Gaspar.

Dinner: We will walk to Lewis House for a catered dinner consisting of a main dish, salad, dessert, hot coffee, tea, water, lemonade. This venue on the water at Eckerd College is reserved for the fanciest events on campus.

Activity note: Getting on/off a bus and sailboat. Sailing about 3 hours.

Lunch: This meal has been excluded from the program cost and is on your own to enjoy what you like. The Group Leaders will be happy to offer suggestions.

Afternoon: We will travel by bus to downtown St. Petersburg for free time. Take this opportunity for personal independent exploration to see and do what interests you most. Please refer to the list of Free Time Opportunities. The Group Leader will be happy to offer suggestions.

Evening: After exploring St. Petersburg on our own, we will return to campus for an evening at leisure.

Lunch: We will have a plated and served meal at the Horse & Jockey British Pub & Restaurant in Pasadena, FL.

Afternoon: We will take the bus from lunch to a high-speed motor boat, searching for dolphins off of Pasadena. Our captain will tell us about the famously social marine mammal as we enjoy our ride.

Dinner: At Parkshore Grill in downtown St. Petersburg, we will have a plated farewell meal of contemporary American cuisine with beverage choices of coffee, tea, water; other beverages available for purchase. Share favorite experiences with new Road Scholar friends during our farewell dinner.

Evening: Returning to the hotel, we’ll prepare for check-out and departure in the morning.

Meals
12 Meals
5 Breakfasts
3 Lunches
4 Dinners
The following choices may be available when requested in advance: Vegetarian
Lodging
Lodgings may differ by date. Select a date to see the lodgings specific to that date.
Jul 12, 2020 - Jul 17, 2020
Eckerd College Sigma Dormitory
5 nights
Saint Petersburg
The Sigma dorms at Eckerd College are tripled with twin, extra long beds and a private bathroom in each room. The pool, waterfront, classrooms, and dining facilities are all within a 15 minute walk and there is parking next to the building.
See All Lodging Options