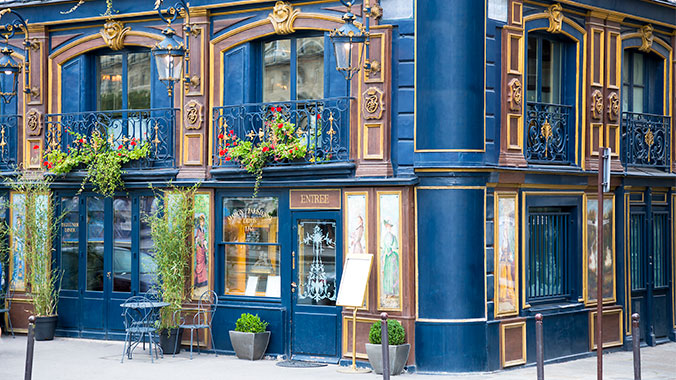 Wishlist Share Start
Book your airfare through Road Scholar and we’ll give you two free hotel nights in Paris before your program to start your European adventure in this beautiful country.
Not yet reviewed
Activity Level

Book your airfare through Road Scholar and we’ll provide two free hotel nights in Paris to begin your learning adventure in France! If you didn’t book your airfare through us, you can still purchase this stay in Paris at an additional cost. With these two extra nights, you’ll be able to explore whichever landmarks interest you the most on independent excursions through this bustling capital city.
Winter in France

These accomodations are only available if you are enrolled in:

Immerse yourself in the elegance of Aix-en-Provence with local experts as you explore the architecture, Roman history and works of Cézanne in the off-season when the city is quiet.
Activity Level
Keep the Pace

This program is an pre-extension only to "Winter in France: Artistic Elegance in Aix-en-Provence" (#23503).
Suggested Reading List
View 16 books
F is for France: A Curious Cabinet of French Wonders
by Piu Eatwell
An alphabetized catalogue of quirky French culture and history tidbits.
Markets of Paris
by Dixon Long & Marjorie Williams
An in-depth guide to the best markets in Paris. Dive into the heart of French culture and navigate the markets like a local with maps, tips, and handy phrases.
Paris in Mind
by Jennifer Lee (Editor)
With selections spanning 300 years, this wonderful anthology reflects America's long connection to Paris and the French. The 30 American writers tapped include Benjamin Franklin, Ernest Hemingway and David Sedaris.
Cathedrals and Castles, The Cathedral Builders of the Middle Ages
by Alain Erlande-Brandenburg
This pocket-size encyclopedia of the art, architecture and culture of the Middle Ages features hundreds of drawings, color illustrations and a brief chronology.
The Most Beautiful Walk in the World: A Pedestrian in Paris
by John Baxter
Australian critic and writer Baxter draws on his second career as a literary tour guide in his adopted city for this witty memoir, laced with terrific tales.
Paris Stories
by Mavis Gallant, Michael Ondaatje (Introduction)
All written in Paris (where Gallant has long lived), these magnificent stories take place from the Left Bank to the French Riviera, postwar Germany and Franco-era Spain. If you haven’t read her work (many of the stories originally appeared in the New Yorker), you are in for a treat. Gallant is one of the great 20th century short story writers.
The Secret Life of the Seine
by Mort Rosenblum
After losing his Paris apartment, Rosenblum, a born storyteller, takes to a houseboat moored on the Seine. The result is this entertaining tour of the places and people he encounters during his explorations along the river.
How Paris Became Paris: The Invention of the Modern City
by Joan DeJean
A captivating history of the growth, design, and planning of Paris, telling the story of how the modern city came to be.
Murder in the Latin Quarter
by Cara Black
The ninth installment in Black's series featuring "adorably punkish" detective Aimee Leduc, who gets around on a pink Vespa. This time, Aimee's investigations lead her through the old university district of Paris -- its colorful streets, schools, museums, cafes and bookstores providing a vivid backdrop to the suspense.
A Traveller's History of Paris
by Robert Coles
A fast-moving, short survey of French history with a focus on Paris from its foundation, through the heady days of revolution and up to modern times.
A Moveable Feast
by Ernest Hemingway
A treasure for anyone interested in Parisian cafe society and its luminaries circa 1925. Hemingway includes sharp portraits of Gertrude Stein, Ezra Pound, F. Scott Fitzgerald, Ford Maddox Ford and others who idled on their way to greatness.
The French Impressionist
by Rebecca Bischoff
Rosemary, 15 years old, is in France on her own for the first time on an exchange program. What an adventure!
Lonely Planet French Phrasebook
by Marie-Helene Girard, Anny Monet
This handy phrasebook focuses on pronunciation, basic grammar and essential vocabulary for the traveler.
Paris Noir: African Americans in the City of Light
by Tyler Stovall
A history of black Americans who settled in Paris, France, from 1900 to the present.
The New Paris
by Lindsey Tramuta
Move past the clichés and learn about what makes up Paris today. Explore the open-minded sensibility, diverse populations, and hidden corners of The New Paris.
Murder in the Marais
by Cara Black
Literate and thrilling, with a strong sense of the geography and flavor of Paris, the first in a series of mysteries starring Aimee Ledoc shows off the French-American detective's wit and wile. The series continues with Murder in Belleville (FRN562), Murder in the Sentier (FRN563) and many more.
Start Enrolling

Activity note: These arrangements are strictly lodging for you to have the most comfortable travel experience with an opportunity to pursue your own personal interests independently. It does not include Road Scholar staff, lectures, field trips, excursions, or other Road Scholar-provided activities. Hotel check-in from 2:00 p.m.

Evening: At leisure to see and do what interests you most.

Activity note: This is lodging only and does not include Road Scholar staff, lectures, field trips, excursions, or other activities. Free time is available for you to pursue your own personal interests independently.

Evening: At leisure. Prepare for check-out in the morning.

DAY
4
Hotel Check-Out, Transfer to Program
In Flight
B

Activity note: Hotel check-out 12:00 Noon. See your program’s “Transportation Information” regarding transfers. If you purchased air arrangements through Road Scholar, a transfer from the hotel to the train station is included.

Meals
2 Meals
2 Breakfasts
0 Lunches
0 Dinners
The following choices may be available when requested in advance: Gluten Free, Vegetarian, Low Fat, Low Salt
Lodging
Lodgings may differ by date. Select a date to see the lodgings specific to that date.
Apr 22, 2020 - Apr 25, 2020
Les Jardins du Marais
2 nights
Paris
Les Jardins du Marais is named for the legendary Marais district of Paris, a location with medieval streets, chics boutiques, charming restaurants, museums, and art galleries. The hotel's 263 rooms and suites are situated around the gardens in seven historic buildings. Recently renovated in 2009, they feature a harmonious mix of 1930s elegance and contemporary style along with the most modern technology.
TripAdvisor Reviews
See All Lodging Options