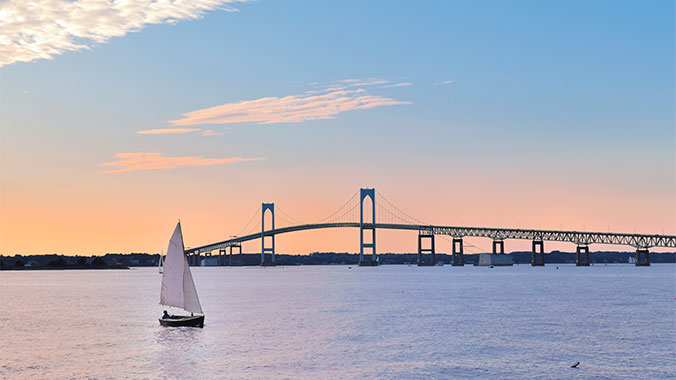 The Best of Newport and a Taste of Providence 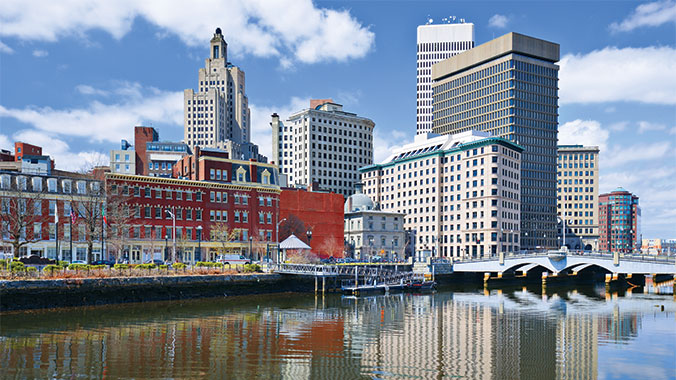 Wishlist Share Start
On expert-led excursions and independent adventures, explore the historic architecture and culinary delights of Providence, and bask in the brilliance of Newport’s stately manors.
Rating (5)
Activity Level

Between Providence’s world-famous Italian heritage and Newport’s extravagant Gilded Age mansions, the smallest state is big on cultural experiences. Discover the best these great cities have to offer on a combination of expert-led excursions and independent explorations. In Providence, learn about Roger Williams and the founding of one of the oldest cities in America, and enjoy numerous walking excursions. Explore the cities on your own with free time to discover their art, architecture and culinary delights. In Newport, trace the city’s rich colonial history and marvel at the grandeur of its magnificent oceanfront mansions.
Activity Level
Keep the Pace
Walking up to 2 miles a day on varied terrain.

Program includes independent time to explore the city and several meals on your own. Group Leaders will provide directions for self-directed excursions. Suggestions for free-time activities provided in preparatory materials.
Start Enrolling

Afternoon: Program Registration 3:30 p.m. – 5:30 p.m. After you have your room assignment, come over to the Road Scholar table in the lobby to register with the program staff and get your welcome packet containing an up-to-date schedule that reflects any last-minute changes, and to learn when and where the Orientation session will take place. If your arrival is delayed, please ask for your packet when you check in.

Dinner: In our private meeting room at the hotel, we’ll enjoy a plated welcome dinner with salad, entrée, and dessert, plus coffee, tea, water; other beverages available for purchase.

Evening: Orientation. The Group Leader will greet everyone and lead introductions. We will review the up-to-date program schedule, discuss roles and responsibilities, logistics, safety guidelines, emergency procedures, and answer questions. Periods in the daily schedule designated as “Free time” and “At leisure” offer opportunities to do what you like and make your experience even more meaningful and memorable according to your personal preferences. The Group Leader will be happy to offer suggestions. Program activities, schedules, personnel, and indicated distances or times may change due to local circumstances/conditions. In the event of changes, we will alert you as quickly as possible. Thank you for your understanding. Continue getting to know your fellow Road Scholars, settle in, and get a good night’s rest for the day ahead. Be sure to prepare for check-out and transfer tomorrow.

Breakfast: At the hotel, the breakfast buffet offers alternating choices such as scrambled eggs, breakfast meat, fresh fruit, and pastries such as muffins and bagels, plus milk, juice, coffee, tea, water.

Morning: After checking out of the hotel, a member of the Rhode Island Historical Society (RIHS) will join us to explore the East Side of Providence along historic Benefit Street, an architectural showcase with one of the highest concentrations of colonial homes in America. At the First Baptist Church — founded by Roger Williams in 1638 and the oldest Baptist congregation in the country — we’ll have a lecture by a college historian. We’ll also visit the John Brown House Museum, one of two maintained by the RIHS, regarded as the foremost 18th century house in the state.

Lunch: This meal has been excluded from the program cost and is on your own to enjoy what you like. The Group Leader will take the group to the historic Federal Hill area of the city, one of the oldest Italian neighborhoods on the east coast.

Afternoon: Next, we'll travel to the Rhode Island State House located on Smith Hill in the downtown part of the city. The building is a neoclassical building that houses the Rhode Island General Assembly, the governor of Rhode Island as well as the lieutenant governor, secretary of state, and general treasurer. Built in 1895, it is listed on the National Register of Historic Places. While here, we will enjoy a exploration of this beautiful building led by State House staff. We’ll then board our motorcoach for travel to the Newport/Middletown area where we will check into our hotel.

Dinner: At one of Newport’s fine restaurants, we’ll order plated meals from a select menu with salad, entrée, and dessert, plus coffee, tea, water; other beverages are available for purchase.

Activity note: Walking up to 2 miles total throughout the day; periods of standing totaling up to several hours. Getting on/off motorcoach; driving approximately 50 miles total; about 2 hours, with stops for field trips.

Morning: We’ll be joined by a local expert for a short motorcoach ride to The Newport Historic District, which covers 250 acres and was designated a National Historic Landmark in 1968. We enjoy a walk through this historic area while seeing some great examples of New England colonial architecture. During our walk, we’ll see a couple of these 17th and 18th century buildings.

Lunch: On your own to enjoy the local fare along historic Thames Street and the harbor.

Afternoon: At a predetermined time and place, we’ll meet our local expert who will take us on a ride along historic Ocean Drive and Bellevue Avenue. Along our journey, we'll make stops in a few locations including Fort Adams and an Ocean Drive overlook before stopping to walk a section of the famous Cliff Walk. We’ll then return to the hotel with some time to freshen up for the evening.

Dinner: On your own to enjoy what you like. The Group Leader will happy to offer suggestions.

Activity note: Getting on/off motorcoach; driving about 30 miles; approximately 1 hour. Walking up to 1 mile total throughout the day; periods of standing in historic houses for approximately 2 hours.

Morning: Setting out via motorcoach, we’ll travel to the famous Vanderbilt's Breakers Mansion, one of the grandest of all Newport Mansions. While here, we’ll enjoy an expert-led exploration of this National Historic Landmark, inducted in 1994. Next, we’ll travel to the Tennis Hall of Fame, built in 1879, which houses the Museum and famous grass courts that have hosted many of the greats.

Afternoon: After some time to explore the Tennis Hall of Fame Museum independently, we’ll transfer to the Elms Mansion, the summer “cottage" of Edward Julius Berwind who made his fortunes in the coal fields of Pennsylvania. A local expert will lead us through this beautiful mansion, which was completed in 1901 and is on the National Register of Historic Places.

Dinner: At one of Newport's fine restaurants, we’ll choose plated meals from a select menu, which will include a salad, entree, and dessert, plus coffee, tea, water; other beverages available for purchase.

Evening: Back in the hotel meeting room, we will a lecture given by a local expert from the Newport Restoration Foundation.

Morning: We’ll begin by traveling via motorcoach to Rough Point, which was commissioned in 1887 by Frederick W. Vanderbilt of the plutocratic family. It eventually became property of James B. Duke, the son of North Carolina farmers who became fabulously rich through the tobacco industry. His daughter Doris was one of America’s leading socialites and, like her father, gave huge sums to educational institutions (including Duke University), health care organizations, children’s homes, and religious institutions. Doris Duke spent summers of her youth at Rough Point, returning in the 1950s for considerable periods. She bequeathed the estate to the Newport Restoration Foundation, which opened it to the public in 2000.

Lunch: On your own to enjoy the regional cuisine.

Afternoon: Our last stop on the educational itinerary will be historic Touro Synagogue, where a local expert will lead our exploration. Built in 1763, this is the oldest surviving synagogue building in the U.S. and is now a designated National Historic Site.

Dinner: At one of Newport's fine restaurants, we’ll order plated meals from a select menu with salad, entrée, dessert, coffee, tea, water; other beverages available for purchase. Share some of your favorite experiences from the program with new Road Scholar friends.

Evening: We’ll gather for a presentation given by members of the Newport Historical Society on other aspects of historical Newport and what led to its restoration. The remainder of the evening will be at leisure. Be sure to prepare for check-out, transfer back to Providence, and departures in the morning.

Breakfast: At the hotel, we will have vouchers for breakfast in the hotel restaurant.

Morning: We’ll then check out of the hotel and transfer via motorcoach to make drop-offs at TF Green International Airport in Providence, Rhode Island, followed by a stop at the starting hotel. This concludes our program. If you are returning home, safe travels. If you are staying on independently, have a wonderful time. If you are transferring to another Road Scholar program, detailed instructions are included in your Information Packet for that program. We hope you enjoy Road Scholar learning adventures and look forward to having you on rewarding programs in the future. Don’t forget to join our Facebook page and follow us on Instagram. Best wishes for all your journeys!

The Best of Newport and a Taste of Providence is an excellent choice for a 6 day Road Scholar trip! I learned so much about both the colonial history in both areas and the gilded era in Newport. The cliff walk in Newport was breathtaking!

With regard to the question of materials sent in advance we did note program changes were made before the program start. There was no box for a discussion of this. Otherwise this form was fine.

This program opened my eyes to the important roll that Rhode Island played in our country’s history. We saw the simplest Quaker Meeting House and the extravagant Vanderbilt summer home. The small group was the perfect size for a walking tour of a small town like Newport. Tillie (our guide) went out of her way to make sure everyone had an enjoyable time. I highly recommend this program.

Continue
Choose Your Airfare
The prices shown here are for airfare only. When you select your airfare, your total price will be updated on the Dates & Prices page.
Choose an airport
Oct 18 -
Oct 23, 2020