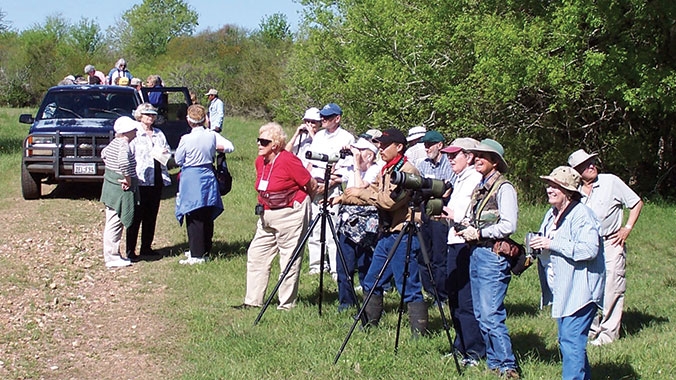 Birding Adventure: The Central Texas Coast to the King Ranch

South Texas is a region like no other, hosting over 510 species of at least 650 known species to breed in the U.S. and Canada. Expert naturalists lead birders through multiple habitats of wetlands, shoreline, estuary and brush, all located within two great migratory flyways. Marvel at endangered Whooping Cranes, cormorants, Green Jays, kiskadees, Olive Sparrows, Vermilion Flycatchers, caracara, numerous hawks, countless shore birds and much more. Novice to veteran birders will enjoy birding at its finest.
Activity Level
Varies by date
Walking a minimum of 1 plus miles a day at stop/start intervals throughout the day. In the field 8-9 hours a day. Driving up to two hours; getting in/out of large vans. Port Aransas, TX elevation 6 feet.

All Road Scholar birding programs have a maximum participant-to-instructor ratio of 14:1 in the field. We adhere to the American Birding Association’s Code of Ethics. Learn more at http://www.aba.org/about/ethics.html
Featured Expert
All Experts

Maureen Tulip
Maureen has been interested in birds for quite some time, but her interests were sparked to a higher level after attending a Road Scholar birding program in South Texas. The birds of South Texas have fascinated her and she now spends much of her free time researching these birds and their behavior. Maureen, a former driving instructor from Michigan, plans to be like the birds and migrate south in the winter.

Afternoon: 4:30 pm. Hotel Dining Room. Welcome and orientation. The group leader will greet everyone and lead introductions. We will review the up-to-date program schedule and any changes, discuss roles and responsibilities, logistics, safety guidelines, emergency procedures, and answer questions.

Activity note: We use passenger vans throughout the week and encourage participants to rotate seating, and vans, during the week to ensure everyone gets prime views. Field days can be long 8-9 hours. Standing for periods of time. Mixed terrain, boardwalks, grasslands, dirt roads, beach etc.

Morning: Our day begins with a short 5 minute drive to the Leona Belle Turnbull Birding Center and Paradise Pond both very productive birding sites year round. Both of these sites attracts birds and birders alike. The boardwalk at the birding center stretches over shallow, brackish water and allows for close observation of many birds. Watch for waterfowl (Black-bellied Whistling-Duck, Cinnamon Teal), grebes (Least included), heron and egrets, cormorants, shorebirds (such as Black-necked Stilt) and flaming pink Roseate Spoonbills. Our next stop will be at Paradise Pond - set on two acres Paradise Pond is a unique, wooded freshwater wetland on Mustang Island. A ‘secret hot spot’ that fills with colorful songbirds each spring and fall. Early migrants to watch out for include Northern Waterthrush, Orange-crowned warbler, Common Yellow, Wilson's warbler, Gray Catbird and so on.

Afternoon: Continue birding on the beach and bays along Mustang Island. Looking for shorebirds, gulls and terns.

Dinner: Dinner at Virginia's on the Bay - menu selections

Activity note: Wear closed toe shoes and appropriate clothes for a boat trip. The MV Skimmer has a catamaran hull with covered lower deck seating and an open upper deck

Morning: Take a 3.5 hour cruise along the shores of the Aransas Wildlife Refuge to observe endangered whooping cranes and other birds in their natural habitat. The MV Skimmer has a catamaran hull, lower covered deck and an upper open deck for excellent viewing. Birding begins as you sail from the dock with plenty to see from a variety of shorebirds, gulls, hawks and more. You may even see some wildlife meandering the shoreline of the Aransas Wildlife Refuge. Then of course you will see endangered whooping cranes in their winter habitat - the tallest bird in N. America. Wonderful photographic opportunities abound.

Afternoon: Birding continued at the feeder stations at Goose Island State Park and Lamar Peninsula. Looking for early migratory warblers and other birds.

Evening: DVD on the history of the King Ranch in preparation for the next days tour. 30 minutes.

Activity note: Drive to the King Ranch 1.5 hour. Some birding by van on the King Ranch, short walking opportunities at intervals. Standing for periods of time.

Morning: Early start. Drive 1.5 hours to the King Ranch for a 4 hour driving/walking guided birding trip with expert instructor. Expect to see Green Jay, Kiskadee, Vermilion Flycatcher, Olive Sparrow and lots more. The King Ranch has a long history of wildlife management. As early as 1947, famed conservationist Aldo Leopold called King Ranch “one of the best jobs of wildlife restoration on the continent.” Today, the ranch is a vital part of an incredibly diverse landscape in South Texas dubbed “The Last Great Habitat.”

Dinner: Catered dinner at the hotel.

Activity note: This day will be used to visit a variety of sites to try and pick up any species that may have eluded us during the week.

Morning: Depart for a short drive to the outlines of Port Aransas Nature Preserve. The natural area’s extensive tidal flats provide feeding areas and important habitat for shorebirds and endangered and threatened species such as the piping plover.

Afternoon: Birding continues around the Port Aransas area, where we will target perhaps some species that may have eluded us during the week

Activity note: Tour the ARK and see how birds and turtles are rehabilitated indoor/outdoor.

Morning: We will take a guided tour of the Amos Rehabilitation Keep (ARK) and learn how birds and turtles are cared for with a goal of being released back to nature

Brunch: Program ends at 10 am. Take snack-pack with you.

As an intermediate birder, I found this program to be quite delightful. The weather was good. The leaders were knowledgeable and excellent. The meals were all quite tasty. I liked that the meals were all included. We were on the go almost all day long. The drive to King Ranch was long, but well worth it to see the Crested Caracara, the Green Jay and a Kiskadee. Oh, and a Javelina! The boat ride got us so close to the whooping cranes. Also saw Oystercatchers and dolphins on the boat ride. I wish we had gotten closer to the Roseate Spoonbill. Each evening, we went over the bird list for the day, and some of us saw more birds than others, but that was ok. I had arranged for a rental car at the end of the trip in Aransas Pass, but they could not deliver across the ferry. So Linda, the leader, drove me to the car rental company. Not sure how I would have managed it without her. Cool birds, really nice and fun birders in the group. We did bond with each other and everyone seemed to have a great time. I went as a single woman but was never lonely.

What a fabulous program! We were able to get within 50 feet of a whooping crane pair, as well as seeing almost every one of the expected birds. Linda and Claudia are fabulous and knowledgeable leaders -we highly recommend this program if you are interested in the birds of South Texas.

Cedar Park, TX
This reviewer did not give a star rating. 11 months ago

The number of birds we identified was unbelievable. Birding was new to me and I learned a lot on this trip and enjoyed the group of travel companions. We started the trip with some terrible cold, rainy weather and the guide found us other activities, which proved interesting. I enjoyed the flexibility of the group. The King Ranch and the boat trip to see the whooping cranes were definitely the highlights. Our bird experts were definitely experts. The motel was convenient and nice to have meetings in their breakfast room. Great trip! My first Road Scholar trip and I will definitely plan a second...

This was an excellent program. Our leader . Linda, was well organized and adapted well to the unusually cold and windy weather. Our bird experts were very knowledgeable. Tom, at the King Ranch was so enthusiastic about the birds we were seeing it was contagious. Our boat captain was great at spotting the birds and helping all on the boat find them. Claudia, our daily bird expert, was vey knowledgeable about the birds we were seeing and their habits