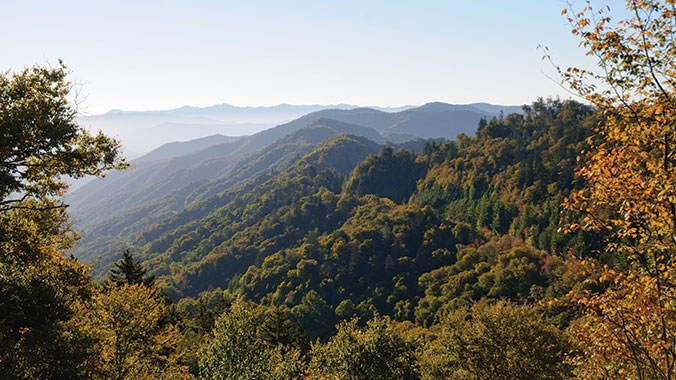 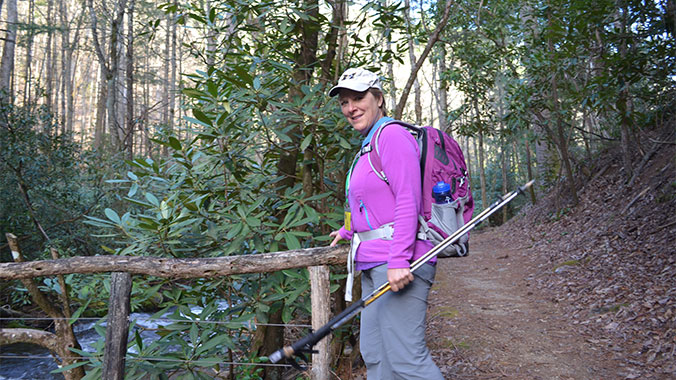 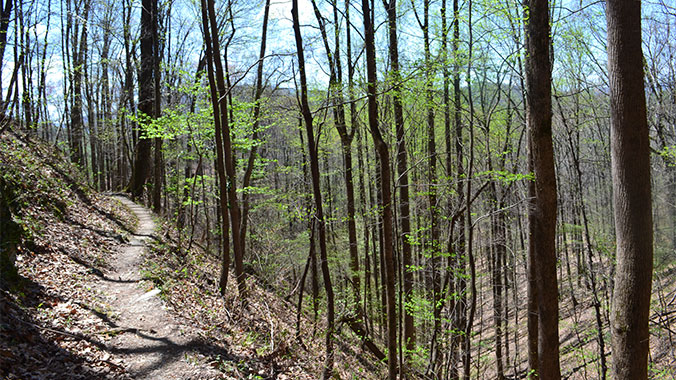 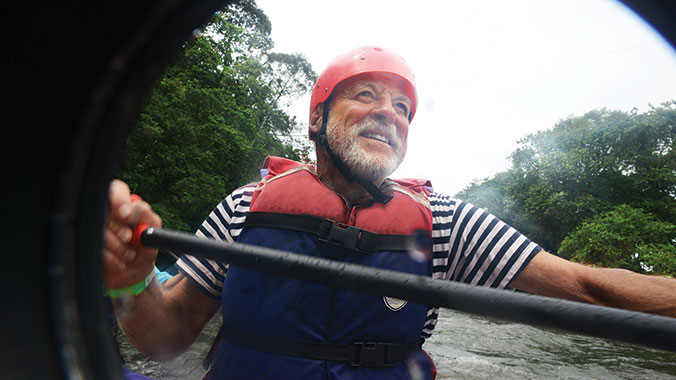 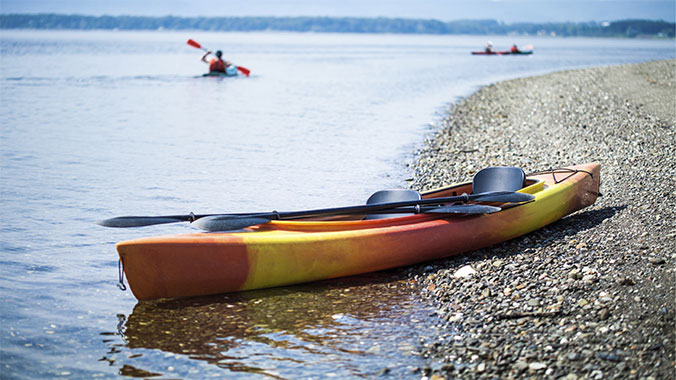 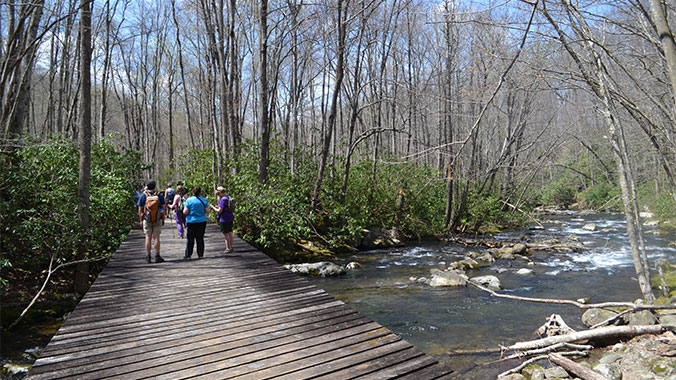 Wishlist Share Start
Experience the thrill of a lifetime in the Great Smoky Mountains as you join outdoor experts to improve your kayaking skills, enjoy nature hikes and take in local cultural performances.
Rating (5)
Activity Level

Get an invigorating outdoor workout with the country’s premiere paddling school, the Nantahala Outdoor Center, as you learn the basics of kayaking amid Great Smoky Mountains National Park. Experts provide in-depth instruction on water safety and paddling technique and then send you into the water to practice on placid Fontana Lake before tackling more rigorous water based challenges such as whitewater kayaking and rafting.
Activity Level
Outdoor: Spirited
Hiking up to three hours on varied terrain; elevation gains of 775 feet. Paddling 3-6 hours each day; swimming ability is required; be prepared for full immersion during wet exits. Kayaking experience not required. River trips supervised by a professional whitewater outfitter.

Afternoon: Check-in between 3:00-4:30 pm at the Wesser General Store, followed by a walking tour at 5:00 pm of the Nantahala Outdoor Center facilities.

Dinner: At 6:00 pm the group will be dining together in one of our on-site restaurants. Guest will enjoy a hearty meal that will include a meat or vegetarian option, sides, drink and dessert.

Evening: After enjoying a dinner with the group's program leaders, you will move to an area set up specifically to go over the activities of the week with your instructors, teachers and guides as well as learn about some local history. At the end of this short session, guests can enjoy mingling at Big Wesser BBQ & Brew on the banks of the Nantahala River.

Activity note: We will be spending the majority of the day paddling stable recreational kayaks on a nearby lake. The distance we paddle will depend on the group. Dress for getting wet. Sunscreen is a must and hats and sunglasses are recommended.

Morning: For most of our programs, we will be paddling on Fontana Lake where instructors will provide techniques for confidence and success. We'll start with a "classroom style" session reviewing the basics of lake kayaking and going over the necessary equipment to enjoy the sport. We will also introduce and study the ecology of our area so we'll be able to identify the flora, fauna and wildlife that abounds in the Smoky Mountains as we explore in our boats.

Lunch: We will take a break mid-day to enjoy a deli-style lunch.

Afternoon: We continue exploring the lake and may take a short hike. After we return to NOC, there will be plenty of time to clean up and enjoy some free time relaxing before dinner.

Dinner: At 6:00 pm the group will enjoy another meal at one of our on-site restaurants. This will provide everyone the opportunity to share stories about the adventures of the day.

Evening: After dinner, Lee Knight will do a program which will include Cherokee songs, stories and ballads, banjo and dulcimer music and tales from the mountains. Lee currently works as a folk singer, story teller and outdoor leader, performing at concerts, workshops, festivals, camps and schools.

Activity note: Comfort around and in the water with confident swimming ability is required. On the hike, expect to encounter unimproved (or semi-improved) trails often narrow with exposed rocks, roots, slippery footing and often continuous uphill hiking.

Morning: We'll head down the Nantahala River for a morning of excitement! There will be an option to go along in a stable raft (with a guide included) for your introduction to whitewater. The shimmering Nantahala River offers river rafting through family-friendly rapids that are mild but exciting. The Nantahala features eight miles of practice on easy Class II rapids before splashing through the exciting Class III whitewater of Nantahala Falls.

Lunch: We'll enjoy another deli-style lunch on the banks of the Nantahala River.

Afternoon: Our afternoon will be spent taking advantage of the scenery, flora and fauna in the Great Smoky Mountains National Park. We have a short drive to Bryson City and into Deep Creek for some easy hiking and waterfall views. We will return to NOC with time to clean up and relax before dinner.

Dinner: At 6:00 pm the group will enjoy dining at one of our on-site restaurants. The adventures of the day are sure to be the main topic of conversation along with discussion of the adventures ahead.

Activity note: Comfort around and in the water with confident swimming ability is required. A demonstration of swimming ability may be required as part of this activity. Be prepared for full immersion (head underwater) as this program will require participants to wet exit or roll a kayak.

Morning: The Introduction to Whitewater Kayaking course begins at the lake where we will become acquainted to more maneuverable whitewater kayaks like you may have seen on the Nantahala River yesterday. The group will learn new maneuvers in these boats, including the "wet exit," in preparation for a trip on a gentle section of moving water.

Lunch: We will travel to a nearby river and enjoy a picnic lunch riverside.

Afternoon: After lunch, we will take our newly acquired skills from our morning on the lake and put them to the test on an easy section of moving water. Water levels depending, we will most likely be on the Tuckaseegee River that flows through Bryson City or the Little Tennessee River. We will make sure that everyone has time to clean up and relax a bit from this busy day before dinner.

Dinner: Dinner will be at 6:00 pm at one of our on-site restaurants. After 3 full days together as a group, the camaraderie will make conversations easy as we all reflect on the days activities.

Activity note: Comfort around and in the water with confident swimming ability is required. On the hike, expect to encounter unimproved (or semi-improved) trails often narrow with exposed rocks, roots, slippery footing and often continuous uphill hiking. This hike will be more strenuous than the one earlier in the week.

Morning: We'll return to the Nantahala River for more whitewater excitement! Today we will be going down the river in inflatable kayaks using our new skills for the best thrills of the week. This will be on the same 8 mile section as before, but in more nimble boats allowing for a more adventurous ride.

Lunch: Enjoy your deli-style lunch with a mountain view, by the river.

Afternoon: For the young at heart (and body), we'll depart on a guided hiking trip that takes advantage of the scenery. We will have a scenic drive to our starting point for a memorable venture on the Appalachian Trail to the Wesser Bald Fire Tower*. This is a 3 mile hike round trip with an elevation gain of 775ft. Expect to encounter unimproved (or semi-improved) trails often narrow with exposed rocks, roots, slippery footing and often continuous uphill hiking. Your guide will point out the flora and fauna located in this beautiful area. This session will end with time to clean up and relax before dinner. *Hike location may vary depending on weather and group's ability.

Dinner: Our farewell dinner together will begin at 6:00 pm. Every participant will receive a commemorative t-shirt before sharing stories about the adventures of the week with the rest of the group.

Evening: Feedback Session - How are we doing?

Breakfast: Participants will enjoy a buffet-style breakfast to fuel up for your trip home.

Meals
14 Meals
5 Breakfasts
4 Lunches
5 Dinners
The following choices may be available when requested in advance: Vegetarian, Gluten Free
Lodging
Lodgings may differ by date. Select a date to see the lodgings specific to that date.
Oct 04, 2020 - Oct 09, 2020
Nantahala Outdoor Center Mountain Cabins
5 nights
Bryson City
Enjoy the Nantahala Gorge and Western North Carolina in deluxe mountain cabins with beautiful views. Stay on site at NOC’s main campus in newly-renovated mountain cabins located at the intersection of the Appalachian Trail and the Nantahala River. The participants will be housed in two different cabins “Birch Cabin” and “Chestnut Cabin”. The Birch Cabin is nestled in the Nantahala Gorge, and the Chesnut Cabin is located directly off the Appalachian Trail in the North Carolina mountains. Both cabins offer comfort and a spacious layout with shared bathrooms. Amenities include flat-screen HD satellite TV in living rooms, free Wi-Fi, large exterior deck with dining area, charcoal grill, heating & air conditioning and fully-equipped kitchen.
See All Lodging Options
4 Reviews
Sort by
Most Recent
5 Average

I had never been white water rafting or kayaking before this trip. I was scared at first with the guided raft trip but by the end of the program it left me wanting to do whitewater kayaking and duckies. Breakfast and dinner were at the restaurant. To my surprise everything was very good. The sack lunches were very good as well. The rooms were comfortable and clean. Our guide Dan Dixson was awesome! The program coordinator, Jae, touched base with each morning to see if we needed anything. Your busy on the water all day with a break for lunch except for the two hikes. But it isn't necessarily physically challenging. But your are ready for bed at the end of the day. The cabins are on a steep hill. Some may find a walking stick helpful. I highly recommend this program.

For my very first adventure with Road Scholar I am very glad it was this trip. Simply put it was magical!