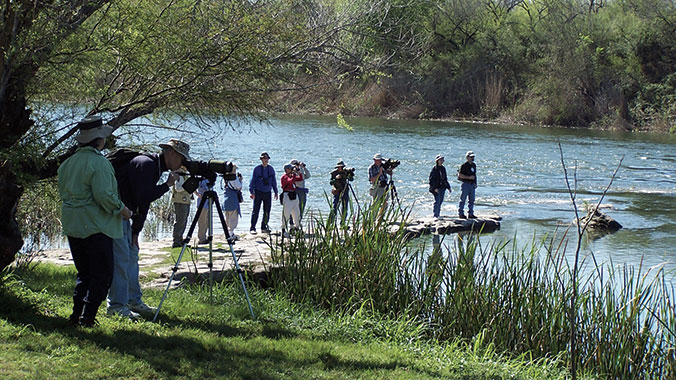 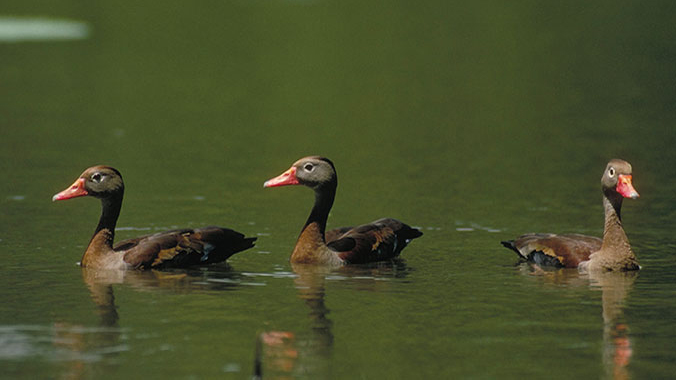 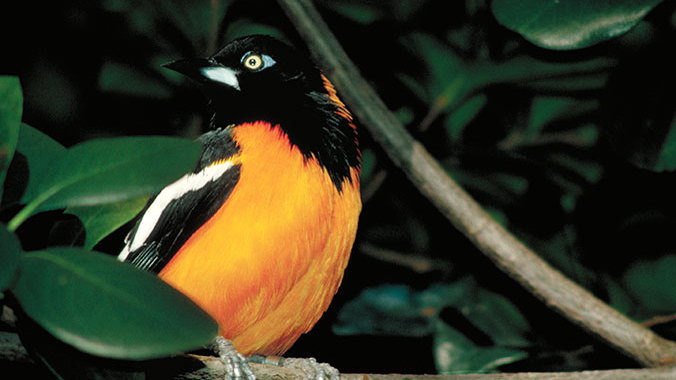 Wishlist Share Start
South Texas is a haven for both birders and birds. Find out why as you learn from experts, discovering rare and beautiful birds in Santa Ana Wildlife Refuge and Bentsen State Park.
Rating (5)
Activity Level

In one of America’s top three birding hot spots, take extensive field trips to some of the best birding sites in south Texas including the Santa Ana Refuge. The Rio Grande Valley area is home to many tropical bird species found nowhere else in the United States. Likely sightings include Chachalacas, Green Jays, Kiskadees, Golden-fronted Woodpeckers and Altamira Orioles. Other targets are the Blue Mockingbird, Red-billed Pigeon, Olive Sparrow, parrots, parakeets, Common Paraque and the tiny White-collared Seedeater.

Activity note: Front desk will show you where the meeting room is located, Meet & Greet, Go over schedule followed by buffet dinner

Activity note: Walking trails on a variety of terrain.

Lunch: At the State Park Recreation Area we will serve a picnic-styled lunch.

Afternoon: Birding continues in the afternoon to selected "birding hot spots" in surrounding areas. See some of the native plants that attract birds like Huisache, Texas Ebony and Anacua, Great Kiskadee and Clay-colored Robin are birds worth looking out for. Back at the hotel we will go over the bird list of the day (optional).

Evening: Free Time. Take this opportunity for personal independent exploration to see and do what interests you most. The group Leader will be happy to offer suggestions. Hotel Happy Hour 4-8 pm

Activity note: Long driving day with first stop after 1 hour, followed by similar to next destination.

Morning: Journey west to Rancho Lomitas, Salineno, approximately 62 miles where your day begins. After stretching your legs experts will take you on an open-wagon tour of the ranch. You will learn about natives plants and their benefits to humans as well as birds. Watch out for various Orioles, Green Jays, Ringed and green Kingfisher, Gray Hawk. The ranch offers a variety of unique animals that you will see such as Longhorn cattle.

Lunch: At the ranch we will serve your pre-ordered sandwich choice, or salad, chips, fruit, cookies, water or soft drink.

Afternoon: Birding will continue in the western valley area hot spots as we wind our way back to McAllen. Back at the hotel we will go over the bird list of the day (this is optional)

Morning: Mission, TX is the home of another of the renowned World Birding Centers. A short 20 mile drive west to this destination where an impressive list of 358 species have been recorded within the park’s boundaries. We will drive through a section of the park with lots of birding opportunities to see migratory birds, some that winter here and others are resident. Previous sightings include Zone-tailed Hawk, Ringed Kingfisher, Tropical Kingbird.

Lunch: At the Park Recreation Area we will serve your pre-ordered sandwich choice, or salad, chips, fruit, cookies, water or soft drink.

Afternoon: Birding continues in the area. With lots of birds to see. Back at the hotel we will go over the bird list of the day (this is optional)

Dinner: On the way to dinner at local restaurant we will be on the lookout for Green Parakeets.

Evening: At Leisure. Continue to enjoy the company of new Road Scholar friends with informal activities such as card games, or sharing some of your favorite experiences of the day over a cup of coffee. Hotel Happy Hour 4-8 pm

Morning: We depart on a short 14 mile drive to Alamo, TX the home of the prestigious Santa Ana Wildlife Refuge. Step into a rare tropical world at the Refuge where you will find Spanish moss draped from trees as noisy Chachalacas welcome the morning dawn and a malachite butterfly floats out from the shadows. Look for Buff-bellied Hummingbirds, Long-billed Thrashers, Green Jays, Great Kiskadees, and Plain Chachalacas

Lunch: At the Park Recreation Area we will serve a picnic-styled lunch

Afternoon: Birding continues as we take a short drive to the Edinburg Wetlands- another World Birding Site. From Green Kingfishers to Guava Skippers, the habitat at the Edinburg Scenic Wetlands supports a plethora of living, moving things. We will be looking for Black-bellied Whistling ducks, Neo-tropical cormorants, and both Yellow- crowned and Black-crowned Night Herons. Back at the hotel we will go over the bird list of the day (this is optional)

Activity note: A short walk or drive to our destination

Morning: What a wonderful way to close a program than a visit to Quinta Mazatlan, where you will find History, Culture, Nature in the Heart of McAllen. Quinta Mazatlan is a mansion with a mission, inspiring families to enjoy nature in their own backyard and around the world. Explore our birding trails, 10,000 square foot historic adobe home, art gallery, nature exhibits and gift store. Back at the hotel the Group Leader will make sure your travel needs are finalized. Then say farewell to new Road Scholar friends.

Meals
14 Meals
5 Breakfasts
4 Lunches
5 Dinners
The following choices may be available when requested in advance: Low Fat, Low Fat
Lodging
Lodgings may differ by date. Select a date to see the lodgings specific to that date.
Feb 02, 2020 - Feb 07, 2020
Radisson Hotel McAllen Airport
5 nights
McAllen
Radisson Hotel McAllen Airport is located close by McAllen International Airport (MFE). The hotel offers a free 24-hour shuttle service to and from the terminals every day of the week. The ideal location of the Radisson makes it easy to walk or drive less than a mile to shop for souvenirs at La Plaza Mall, visit museums, or take the local shuttle to other destinations within a 10-mile radius of the hotel. A nature lovers delight is a short walk away to the Quinta Mazatlan World Birding Center and the National Butterfly Center, two organizations known for their dedication to protecting the wildlife of South Texas.
TripAdvisor Reviews
See All Lodging Options
6 Reviews
Sort by
Most Recent
5 Average

Another thoroughly enjoyable excursion for me to South Texas and our excellent guides Michael M and Dane F ensured our enthusiastic group viewed 130 species ! Highlights were the close encounters with kiskadees, green jays, cardinals, blackbirds and Altamira orioles at Salineno & Quinta Mazatlan and the superbly managed wildlife refuges including Estero Llano, Bentsen, Santa Ana and Edinburg whose trails made for great viewing and photographic opportunities.

This program was everything we hoped for and more. The guides were friendly and knowledgeable, and the birding was fantastic. We saw birds on this trip that are found nowhere else in the United States. I highly recommend this trip.

Wonderful trip. So many new and different birds. Michael and Bob were fantastic guides. Accommodations at Staybridge were nice, breakfasts at the hotel were spectacular. Trip was not as strenuous as it sounded like it would be. Was interesting,Fast moving and enjoyable. Bob and Michael made sure that every participant got to see every bird! Took great care of the group.

We were so lucky that we saw rare birds in this trip specifically the Crimson Grossbeak.

This was my 3rd trip to the area and I always find something new to add to my list. Great opportunities in the Texas Rio Grande area. The locals are very cordial as well. Good group!