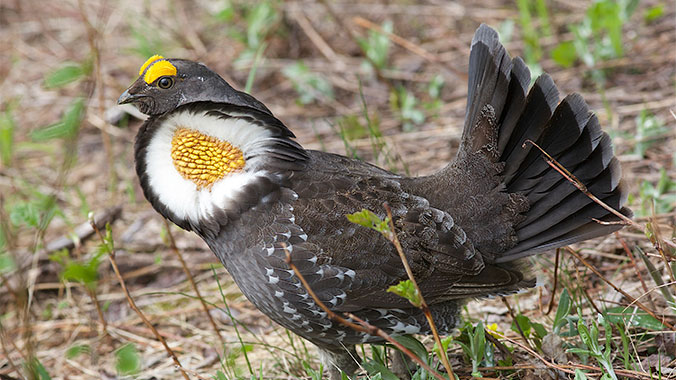 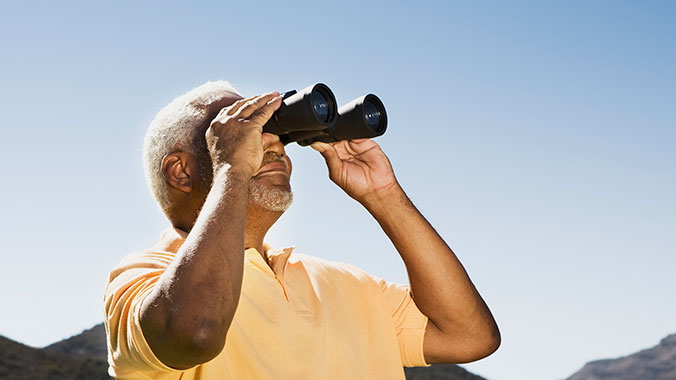 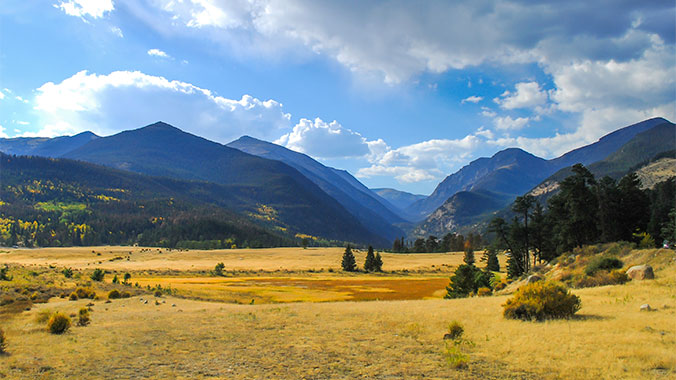 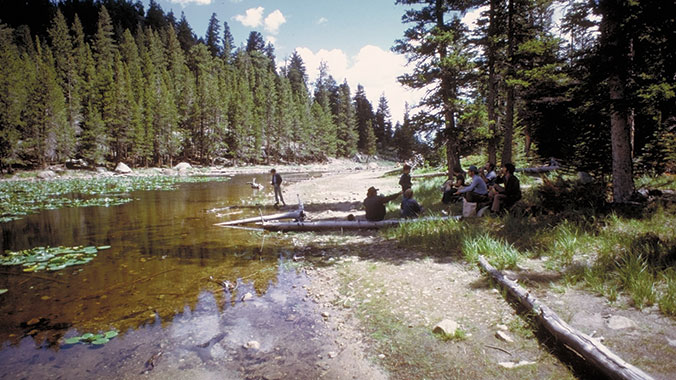 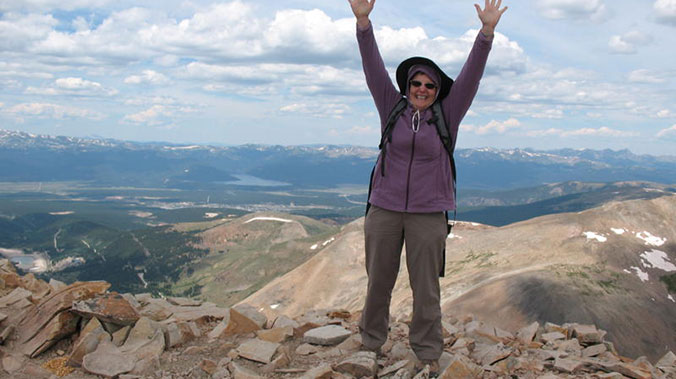 Wishlist Share Start
The Colorado Plains, Canyons and Rockies are home to myriad species of rare and unique birds. Come see for yourself as you hike with experts and search for more than 150 bird species.
Rating (4.25)
Activity Level

Add to your birding life list in one of four beautiful Colorado locations! Discover the variety of species that call this diverse state home along the deserts and plains or above the tree lines of the Rockies. Each day, walk to different birding observation locations and enjoy field trips via hiking or van to different habitats, depending on the date. Join us on Colorado’s southeastern plains in early May, or amidst the Rockies surrounding Estes Park or Pingree Park in mid-June and mid-July. Whether you’re a novice or experienced birder, you’ll delight in this avian adventure!
Activity Level
Outdoor: Spirited
Daily walks of 2 and up to 5 miles while birding, on rocky, uneven trails. Elevation changes of up to 1000 ft on walks; Elevations between 4,000 – 10,000 ft. depending upon location in Colorado. Access to birding locations requires drives by van of thirty minutes to two hours to maximize birding opportunities.

Activity note: Daily walking totals of up to two miles (five miles on Day 3 to access birding locations. Access to birding locations requires drives of thirty minutes to two hours to maximize birding. Minor modifications to the schedule or the order of activities may be made due to weather or other circumstances.

Morning: Birding the Pingree Park Valley-walking up to two miles on mostly level terrain at 9,000 feet.

Evening: After dinner, drive to Ponderosa Forest for evening birding walk, learn about the different species in different ecological life zone. Walking up to one mile over mostly level terrain. Return after sunset to Pingree Park.

Activity note: Hike is 5 miles round trip, mostly easy walking on developed trails but some hills will be encountered, elevation gain of 1,000 feet. Evening drive 30 minutes each way to birding location, walk of 1 mile on mostly level terrain.

Morning: After breakfast, hike to Cirque Meadows, a beautiful large glacially carved valley and tarn for birding the Spruce-Fir Lifezone. At an elevation of 10,000 feet, the Meadows is home to wildlife such as marmots, pikas, Blue Grouse, beaver, and other large mammals. Explore while hiking the changing habitat and related bird species. Hike is 5 miles round trip, mostly easy walking on developed trails but some hills will be encountered, elevation gain of 1,000 feet.

Evening: After dinner, drive to Forest Fire area for evening birding walk, learn about the 2012 fires and impacts upon birdlife and the remarkable recovery story. Walking up to one mile over mostly level terrain. Return after sunset to Pingree Park.

Activity note: Travel by van 2 hours to North Park by way of scenic Poudre Canyon; walks up to one mile on level terrain, trails or boardwalks at stops.

Morning: All day birding field trip traveling by vans to North Park, an amazing grassland surrounded by high snowy mountain peaks. The Arapaho National Wildlife Refuge is a haven for waterfowl and high mountain song birds. Over 200 birds have been recorded in the refuge with 82 species breeding. Two are on the Federal Threatened Species list. The two hour drive from Pingree Park will transit by way of Poudre Canyon and stops will be made for scenic views and an extended visit at the State of Colorado's Moose Visitor Center. Birding opportunities will exist at all stops with walks up to one mile on level terrain, trails or boardwalks.

Afternoon: Continuation of field trip. The first waterfowl arrive at Arapaho NWR when the ice vanishes in April. The peak migration occurs in late May when 5,000 or more ducks may be present. Canada geese have been re established in North Park and begin nesting on the refuge during April. Duck nesting usually starts in late May and peaks in mid June. The refuge produces about 7,000 ducklings and 150 to 200 goslings each year. Primary upland nesting species include the mallard, pintail, gadwall, and American wigeon. A number of diving ducks, including the lesser scaup, ruddy, and redhead, nest on the larger ponds and adjacent wet meadows. Most species may be observed during the entire summer season. Fall migration reaches its height in late September or early October when up to 8,000 waterfowl may be on the refuge. Refuge wetlands also attract numerous marsh, shore, and water birds. Sora and Virginia rails - shy, secretive birds - are numerous but seldom seen. If they are present, eared and pied-billed grebe, Wilson's phalarope, American avocet, willet, sandpipers, yellowlegs, and dowitchers will be easy to observe. Other less common species include great blue heron, black-crowned night heron, American bittern, and white-faced ibis. The sagebrush upland harbor sage grouse year around. Golden eagles, several species of hawks, and an occasional prairie falcon circle the skies above the refuge in search of food. Their prey includes Richardson's ground squirrel, white-tailed prairie dog, and white-tailed jackrabbit. Badger, muskrat, beaver, coyote, and pronghorn antelope are commonly observed. Now and then one may see a red fox, mink, long-tailed weasel, or porcupine. As many as 1200 elk have wintered here with mule and white-tailed deer seen sporadically. Moose reintroduced in the seventies into North Park may occasionally be observed in the willow thickets along the Illinois River bottoms.

Morning: Today our plan is to drive and hike to a location chosen by our birding leaders. The target area is in the Ponderosa Pine and Aspen Forest, an important bird and wildlife habitat. This habitat is one of the richest in this region for bird diversity and is called the montane forest ecosystem. Walking will be over generally level terrain as we walk through the pines, aspens, and open meadows. Total distance will be approximately 2-3 miles.

Morning: Departure after breakfast, check out time 10am.

Great program with significant number of species (greater than 100) sighted in spectacular scenery . Enthusiastic leader who ensured all in our small group saw the birds that were spotted by others in the group. Excellent photographic opportunities for both birds and landscapes

If you love birds or want to learn and see more of them, this program is terrific. These instructors are incredibly knowledgeable. A beautiful, remote setting that is worth the trip to get there.

Celebration, FL
(2) a year ago

This review is for the program for Western Colorado based in Grand Junction. First of all, this is a birding trip with some walking- it is not a hiking program. The first day had some minor hiking but the remaining days were pretty standard for a birding trip. It is at altitude but you would expect that in Colorado. The scenery was spectacular and the birding was good but we spent way too much time in the van driving to / from the various birding sites. I think the organizers need to reconsider the base location for this program. If you are looking for a hiking trip, this is not for you. If you want a birding program in a beautiful part of the country, and you don’t mind an hour and half (or more) drive each way, each day- than I would recommend this program.

Hi Patricia! Thanks for your feedback. We apologize for any confusion surrounding the title of this program. We adjusted it to “Hiking and Birding in Colorado” a few years ago to emphasize the lengthy nature of some of the walks while out birding. We agree with you that it might set the wrong expectations and have changed it back to “Birding in Colorado.” Instead, we’ve tried to better emphasize the physical demands of the program in the Activity Notes. Additionally, based on feedback we received from participants who attended your date of the program, we have moved the date of this program that focuses on birding in western Colorado to Montrose for 2020. Thanks for your input!

Tallahassee, FL
(5) a year ago

This class for birding in Western Colorado gave us a wonderful opportunity to see an amazing part of the country and greatly increase our knowledge about birds. It was advertised as likely to identify 100 species and the class total was 106 . The hiking was challenging but within our "flatlander's" capability and carefully planned to give time for adjustment to altitude so by the last day we were doing great hunting for birds over 10,000 feet on Grand Mesa in the snow. The course far exceeded our expectations. Thank you Road Scholar.