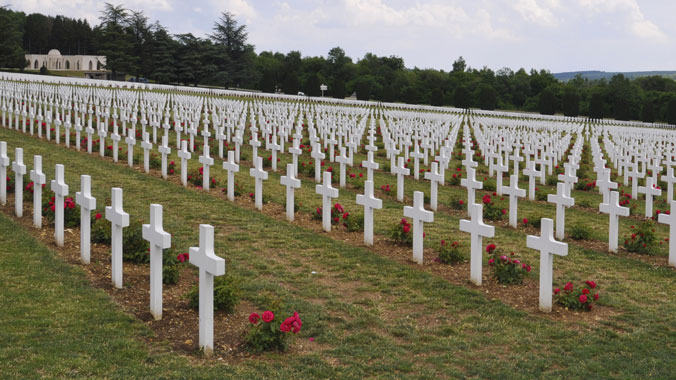 A Day With Spencer Jones: Delving Deep into WWI History

Program No. 24174RJ
Length
1 days
Starts at
0
1 days
0 nights
0 meals
0B 0L 0D
1
Join Dr. Jones for an in-depth look at the First World War
The comfort of your own home
View Full Itinerary

July 28, 1914 ended with a bang as a single shot echoed through the streets of Sarajevo and rippled across the entire globe. The assassination of Austrian Archduke Franz Ferdinand and his wife, Sophie, became the powerful catalyst that sparked “the war to end all wars” and began the four-year-long fight for political and geographical power. During a morning and afternoon session, join Dr. Spencer Jones for an in-depth look into the causes of WWI, the delicate web of alliances, the intense battles and important aftermath, and learn about the war’s impact on the modern world.
Activity Level
Easy Going
Your online program will be between 11:00 a.m. and 3:00 p.m. (ET) with a 1-hour break for lunch between the morning and afternoon sessions.

The morning presentation is available to a large audience, while the afternoon private presentation and discussion is limited to only 24 participants.
Featured Expert
All Experts

Spencer Jones
Dr. Spencer Jones is a senior lecturer in armed forces and war studies at the University of Wolverhampton. He currently serves as regimental historian of the Royal Regiment of Artillery. His interest in history focuses on the British Army, the Boer War and the First World War. He is the author of several books, including “From Boer War to World War: Tactical Reform of the British Army 1902-1914” and “Stemming the Tide: Officers and Leadership in the British Expeditionary Force 1914.”

Print All
Map details are not available for this location.
View Map
Expand All
1 days
0 nights
0 meals
0 B 0 L 0 D
DAY
1
Join Dr. Jones for an in-depth look at the First World War
The comfort of your own home

Morning: We will join Dr. Spencer Jones for a “virtual” lecture at 11:00 a.m. (ET). After decades of international tension in Europe, the assassination of Archduke Franz Ferdinand of Austria — on June 28, 1914 — struck a spark that ignited the inferno of World War I. As Dr. Jones explores the controversial causes of the war, we will learn how a complex web of alliance politics locked rival nations into a collision course, and how the erratic leadership of key rulers contributed to plunging Europe into the cauldron of war. Following the lecture, we will participate in a question and answer session facilitated by a moderator. The lecture and Q&A session will last 45 minutes.

Afternoon: At 1:00 p.m. (ET), Dr. Jones will address follow up questions from this morning's lecture before diving deeper into history. In August 1914, Germany staked everything on an all-out invasion of France intended to crush her old rival within six weeks. We will take an in-depth look at some of the hardest fighting of World War I and learn how the Allies saved Paris at the “Miracle of the Marne.” Then at 2:15 p.m. (ET), we will have an extended question and answer session with Dr. Jones. The program will conclude at 3:00 p.m. (ET).

Meals
0 Meals
0 Breakfasts
0 Lunches
0 Dinners
The following choices may be available when requested in advance:
Lodging
Lodgings may differ by date. Select a date to see the lodgings specific to that date.
Aug 06, 2020 - Aug 06, 2020
See All Lodging Options

Continue
Choose Your Airfare
The prices shown here are for airfare only. When you select your airfare, your total price will be updated on the Dates & Prices page.
Choose an airport
Aug 6 -
Aug 06, 2020