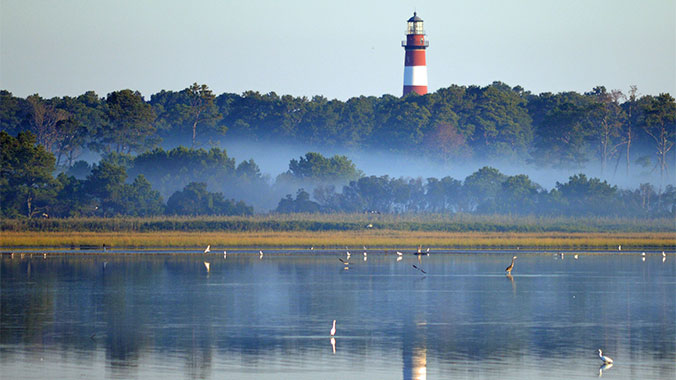 Bicycling the Eastern Shore of Virginia 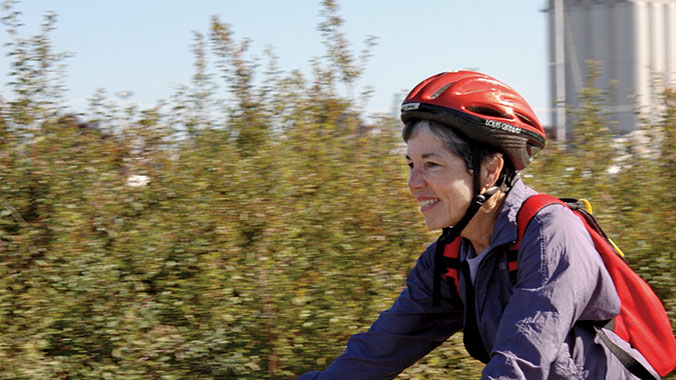 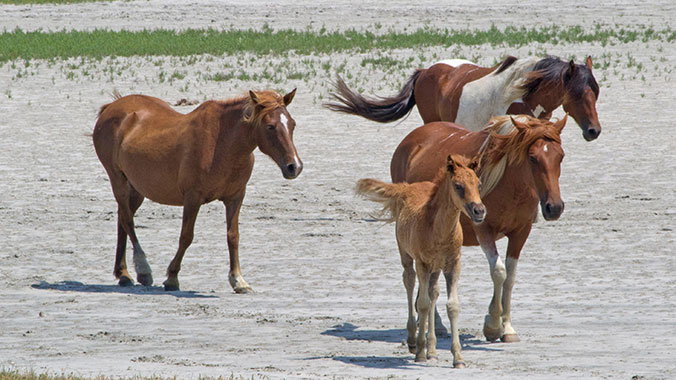 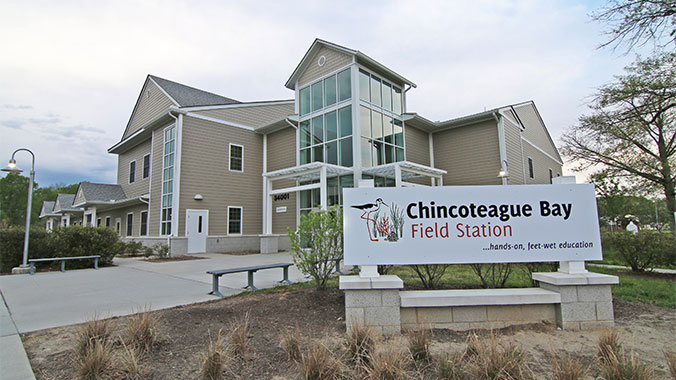 Explore Virginia’s gorgeous Eastern Shore by bike with a small group of like-minded adventurers for a scenic learning journey with Chincoteague Bay Field Station. Ride the biking trails of Chincoteague National Wildlife Refuge and Assateague National Seashore, travel across the Eastern Shore Peninsula from the Atlantic Ocean to the Chesapeake Bay and look for wild ponies, egrets and horseshoe crabs.
Activity Level
Outdoor: Spirited
Novice to intermediate cyclists! Cycling 11-27 miles daily (up to 6 hours/day) on flat paved or hard gravel terrain with frequent stops. Primarily biking on roads with some bike paths/lanes. Walking one mile on uneven terrain, standing for up to an hour and climbing stairs. Participants encouraged to bring own bike. Limited rentals available.

Afternoon: Program Registration: 3:00 – 5:00 p.m. Come to the Road Scholar table in the lobby to register with the program staff and get your welcome packet containing your room assignment, up-to-date schedule that reflects any last-minute changes, other important information, and to confirm when and where the Orientation session will take place. If you arrive late, please contact the Chincoteague Bay Field Station to find out where to meet the group.

Dinner: In the cafeteria, we’ll enjoy a family-style seafood feast! Sample local crabs and shrimp or if you choose, grilled chicken or roasted vegetables. Coffee, tea, water, and a selection of juices and sodas are available.

Evening: Orientation. The Group Leader will greet everyone and lead introductions. We will review the up-to-date program schedule, discuss roles and responsibilities, logistics, safety guidelines, emergency procedures, and answer questions. This is a Road Scholar Retreats program. Our programming at Retreat locations includes opportunities for interaction with members of the local community, a farm-to-table or locally sourced meal, and evening entertainment. Please keep in mind that the workshop schedule is tentative and subject to change due to weather, access, seasons, and other factors. When you arrive, you will receive an updated schedule specially tailored for that particular week. Periods in the daily schedule designated as “Free time” and “At leisure” offer opportunities to do what you like and make your experience even more meaningful and memorable according to your personal preferences. The Group Leader will be happy to offer suggestions. Program activities, schedules, personnel, and indicated distances or times may change due to local circumstances/conditions. In the event of changes, we will alert you as quickly as possible. Thank you for your understanding.

Activity note: Biking about 20 miles throughout the day; frequent stops; flat, paved terrain. Standing for up to 30 minutes.

Breakfast: In the field station cafeteria, our staff will present an array of fruits, hot and cold cereals, meats, breads/biscuits, eggs, or pancakes for your choosing. Coffee, tea, water, and a selection of juices and sodas are available.

Morning: Our morning will be spent cycling on Chincoteague Island! We’ll view historical sites such as the Timothy Hill House, the oldest house on the island, which was built circa 1815. We will also ride by Miss Molly's Inn, where Marguerite Henry wrote the acclaimed story, ‘Misty of Chincoteague.’

Lunch: We’ll enjoy a picnic at Memorial Park. Weather permitting, we will be making sandwiches while we enjoy the view of the Assateague lighthouse. Build your sandwich from your choice of toppings, and finish it off with cookies, fruits, and other snacks! A cooler filled with ice water and a selection of Gatorade will refresh you after our morning ride.

Afternoon: We’ll meet with a local waterman and learn about the area's rich watermen traditions and heritage. Hear how watermen make their living off what's in season offshore. After that, we’ll ride onto Chincoteague National Wildlife Refuge and tour the visitor center's excellent exhibits before embarking on a journey along Assateague's many well-kept bicycle paths and limited-access roads. Spring and fall are excellent times for biking in this area. As fall begins to settle on the region, the shore and wading birds leave, making way for our famous waterfowl. You will be amazed by the sheer numbers of majestic snow geese, as well as our beautiful ducks and swans! Spring catches new birth and amazing animals reappearing after their winter's rest.

Dinner: The Eastern Shore is home to some outstanding American fare and seafood restaurants. Your meal will not disappoint at one of these fine eateries.

Evening: A trip to Chincoteague would not be complete without a visit to the award-winning Island Creamery. Enjoy a scoop of its delicious homemade ice cream and experience first-hand why this is a must-stop spot!

Morning: We will begin our ride at the Atlantic Ocean and head toward Onancock. Along the way we will make several stops at local places of interest, including the Locustville Academy. This museum still stands in the 1859 building built to educate boys and girls headed for college. It’s the lone survivor of about a dozen schools of higher learning built in the 1800s. There’s a small museum inside, operated by the Society for the Preservation of Locustville Academy.

Lunch: Lunch will be at a local seafood restaurant in Wachapregue, Virginia.

Afternoon: This afternoon we will bicycle to Onancock, which bills itself as the "Gem of the Eastern Shore." Thanks to a new generation of imaginative shop owners, it has achieved legitimate "must-see" status. Our last museum stop will be Ker Place, a 200-year-old home built in the Federal style by John Ker. Detailed finishing and vibrant colors reflect Ker's fine taste for his period. In the parlor stands a pianoforte, a musical instrument made in Vienna. On the second floor are interpretive exhibits, and on the first floor, a museum store with works by regional artists, crafters and authors. Outside are restored gardens. We will end our day in downtown Onancock.

Dinner: In the field station cafeteria, our staff will serve your dinner with options ranging from a hot meal to a diverse salad bar. Coffee, tea, water, and a selection of juices and sodas are available.

Evening: Tonight, a local group will entertain us with live music.

Morning: This morning we will ride from the Chincoteague Bay Field Station campus to Wallops Island, a NASA/Navy base. On the base is a very nice, restricted access beach with an intact dune system. There we will have time to explore the beach, and your Educator will help you to identify shells. NOTE: Our access to Wallops Island will depend on the security level of the base at the time, which is influenced by a number of factors independent of the Chincoteague Bay Field Station and its actions. Upon returning, check out and say goodbye. This concludes our program. If you are returning home, safe travels. If you are staying on independently, have a wonderful time. If you are transferring to another Road Scholar program, detailed instructions are included in your Information Packet for that program. We hope you enjoy Road Scholar learning adventures and look forward to having you on rewarding programs in the future. Don’t forget to join our Facebook page and follow us on Instagram. Best wishes for all your journeys!

Meals
8 Meals
3 Breakfasts
2 Lunches
3 Dinners
The following choices may be available when requested in advance: Vegetarian
Lodging
Lodgings may differ by date. Select a date to see the lodgings specific to that date.
Oct 05, 2021 - Oct 08, 2021
Chincoteague Bay Field Station
3 nights
Wallops Island
The Chincoteague Bay Field Station is a residential environmental learning center and field station. Participants are accommodated in modern, suite-style rooms with four double-occupancy bedrooms with central heat and air-conditioning. Bathrooms are not connected to bedrooms but are shared by only two rooms. The two-story residence halls have no elevator and are across campus from meeting spaces and the cafeteria. A large campus lounge allows for camaraderie with fellow Road Scholars, with comfortable chairs and sofas, tables to play games and a TV. Meals are served in a common dining room where residents other than Road Scholars will dine. Good to know: No TVs in rooms. Wi-Fi in main Education Center. Coin-operated laundry room. Housekeeping once a week. Most meals served buffet-style; bus own table.
See All Lodging Options
7 Reviews
Sort by
Most Recent
4.8 Average

If you are a casual cyclist and are interested in learning about life on the Eastern Shore as well as its history, I recommend this program. There is no better way to be immersed in a place and culture than by riding through it on a bicycle. The group size of 10 was perfect, and consisted of couples and also singles like me. Routes were well-planned, leaders were familiar with our destinations, and accommodations were comfortable.

Program vastly exceeded my expectations. If you want to cycle, this is the program for you. Enjoy!

Keller, TX
This reviewer did not give a star rating. a year ago

This was a really fun time! The guides were fun and knowledgeable and seemed to really enjoy their work. The ride was very nice, no huge hills as the islands don't increase that much in elevation. The food was good. Accommodations are a field station, not a hotel, so don't expect turn down service! The bed linens issued were a bit thin so bring a blanket if you get cold and are booking one of the spring or fall trips. And don't forget that plastic bag for shells. The beach on Wallops Island is closed to the public so there are great shell finds there.

A well rounded trip. We got to see the countryside at a comfortable pace. It was a nice variety of interesting places and events. The Chincoteague Bay Field Station is clean, comfortable and quiet. The entire staff was great. Ryn was our main guide and did a fantastic job on information, engaging the whole group and safety. It was a wonderful trip. I would recommend it!

Very fun and educational trip. Be prepared to bicycle. Be prepared for others who are not in bicycling condition which may result in a different pace than you expect.

Potomac, MD
This reviewer did not give a star rating. a year ago

I thoroughly enjoyed the trip. The trip leaders were interesting, fun and very attentive to group needs. I loved the beauty of Assateague Island and learned a lot about the history and ecology of the area. The trio that performed for us one night was outstanding. There was a good mix of bikers and a interesting group of participants. Just be aware there are mosquitos in the wetlands -- and come prepared if you have extended summer weather as we did in October!