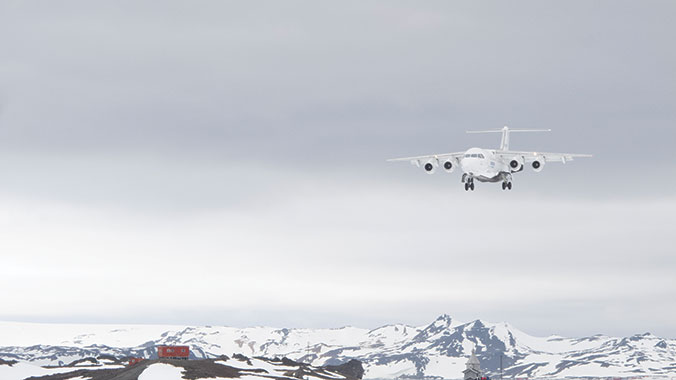 Mission to Antarctica: Fly to an Icy World of Discovery 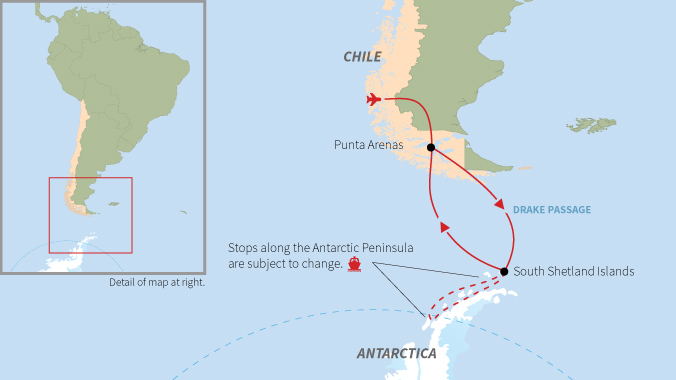 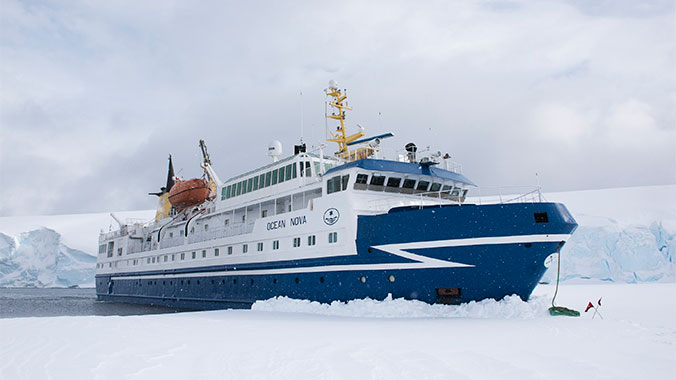 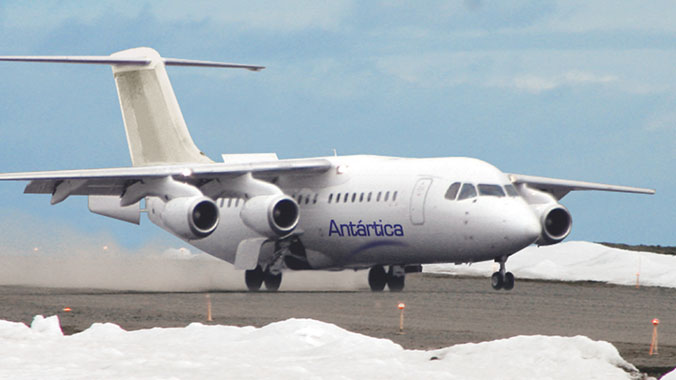 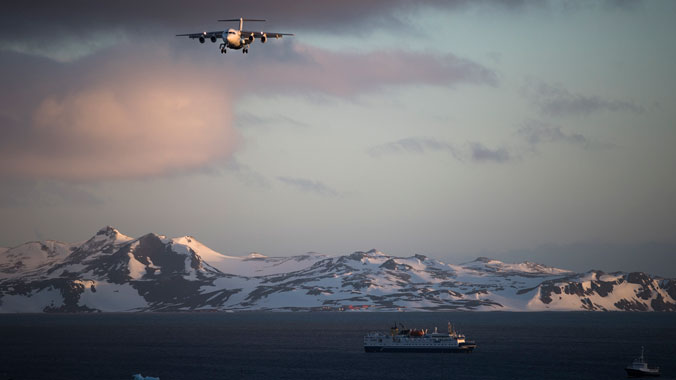 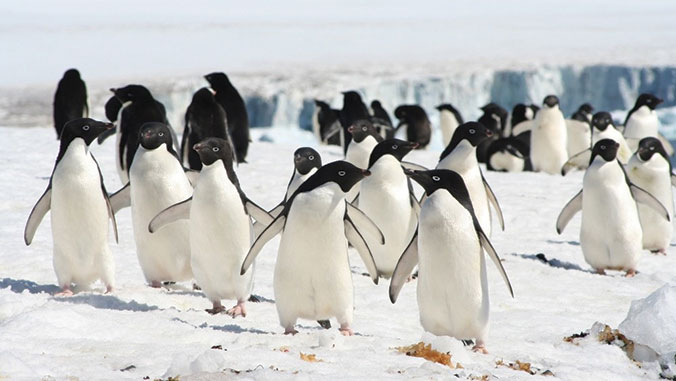 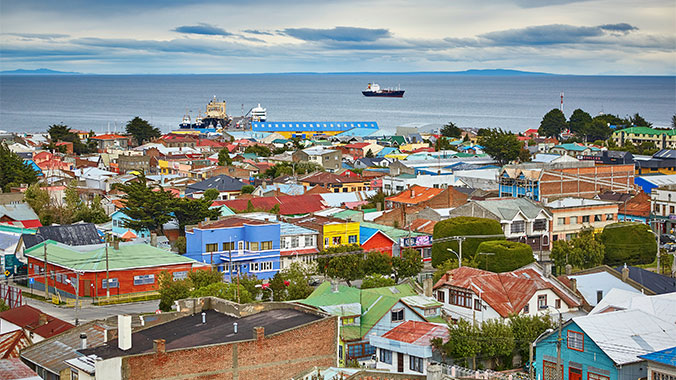 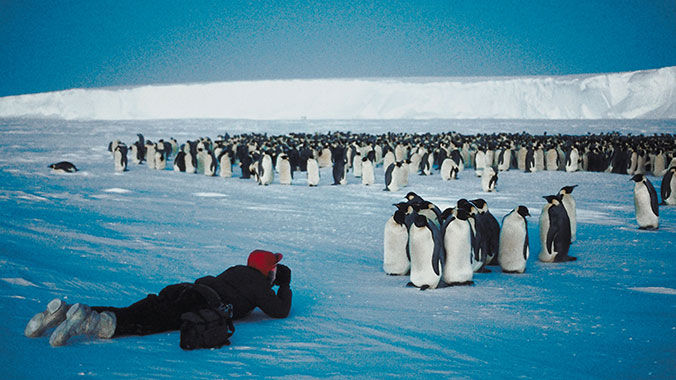 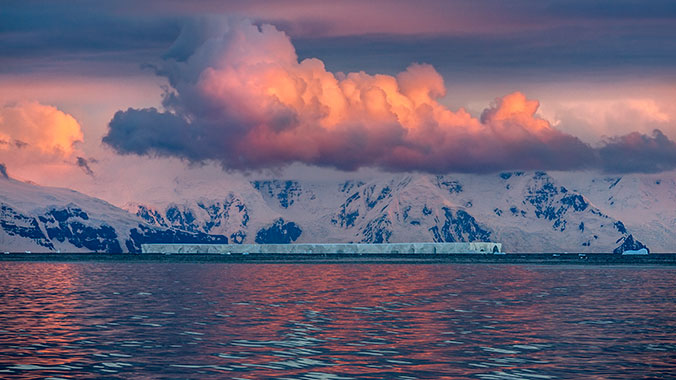 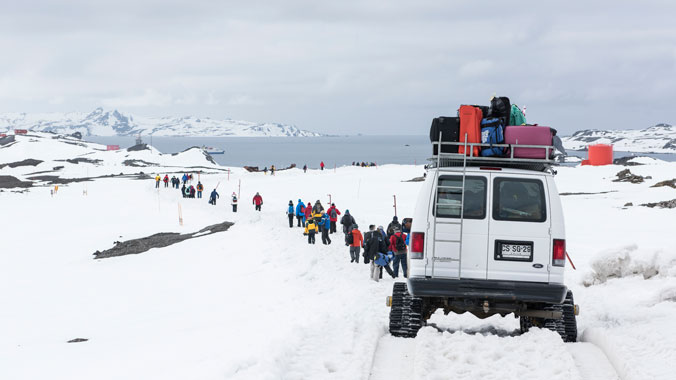 Discover the otherworldly, frozen realm of Antarctica on a study cruise that flies over the Drake Passage rather than sailing it. Crossing the Drake Passage takes more than two days in each direction, a voyage often made unpleasant by rough seas. Fly over the passage instead on a plane from Chile to an Antarctic base, where you meet the ship and immediately get started exploring.
Activity Level
Keep the Pace
Mobility is required to get in and out of Zodiac inflatable boats. Walking on uneven, hilly and slippery terrain.

Flights to Antarctica can be delayed due to weather conditions. There is a contingency plan in place in the event of a multi-day delay that will be sent with your first mailing.
Suggested Reading List
View 20 books
Southern Light, Images from Antarctica
by David Neilson (Photographer)
Photographer David Neilson has turned his six journeys to the ice over the last 20 years, often with the Australian Antarctic Program (and sometimes lugging a 30-pound large format camera), into a coffee-table tribute to the continent and its wildlife. Includes 130 color and 100 rich black-and-white oversized photographs, gate-folds and double-page spreads that portray the drama and beauty of the Antarctic.
Where the Earth Ends, A Journey Beyond Patagonia
by John Harrison
A spirited tale of adventures in the southern tip of South America, south from the Pampas and Patagonia to Punta Arenas, the Beagle Channel, Ushuaia -- and Antarctica.
1912, The Year the World Discovered Antarctica
by Chris Turney
Turney looks at the great leap forward in Antarctic science that was made 100 years ago with the expeditions of not just Scott and Amundsen but also those of Mawson, Filchner and Shirase. A brisk and engaging history of science and exploration in the Antarctic. An Australian scientist himself, Turney sees Mawson as the scientific hero of the age.
Penguins of the World
by Wayne Lynch
Lynch weaves delightful tales of penguins, their habitats and habits, with hundreds of glorious full-color photographs.
Lonely Planet Antarctica
by Lonely Planet
Alexis Averbuck, author of the new edition of this compact and surprisingly handy guide, expands coverage of Ushuaia, the Falklands and South Georgia. With a wildlife guide and contributions from 26 Antarctic experts on the history, geology, wildlife and future of Antarctica.
The Antarctic Book of Cooking and Cleaning, A Polar Journey
by Carol Devine, Wendy Trusler
An insightful miscellany from a 55-person environmental cleanup expedition in Bellingshausen, Antarctica. The authors’ travelogue is supplemented by 42 recipes, anecdotes, journal entries, vignettes and captivating photography.
The Last Place on Earth, Scott and Amundsen's Race to the South Pole
by Roland Huntford
Igniting huge controversy when it first appeared, Huntford's rousing dual biography contrasts Amundsen's well-planned campaign to achieve the Pole with Scott's ill-fated quest.
Alone in Antarctica, The First Woman to Ski Solo Across the Southern Ice
by Felicity Aston
In this inspirational memoir, Felicity Aston describes her pioneering journey -- skiing across the whole of Antarctica -- while meditating on human vulnerability, struggle and the experience of solitude in the Information Age.
The Oceanites Site Guide to the Antarctic Peninsula
by Ron Naveen
The guide, which supports the Antarctic Site Inventory Project, covers 40 prime visitor sites in detail. It also includes some of the best photography we've seen. Second edition.
The Crystal Desert
by David Campbell
A biologist with the heart of a poet, Campbell focuses on the fossils, glaciers and wildlife of the Antarctic Peninsula in these vivid essays.
Antarctic Explorer Map
by Ocean Explorer
A full-color map of the Antarctic Peninsula, including Tierra del Fuego, the Falklands and South Georgia, at a scale of 1:2,750,000. With a map of the Antarctic continent on the reverse.
Penguins, The Ultimate Guide
by Tui De Roy
Featuring more than 400 photographs, this is the traveler's ultimate guide to the world's 18 species of penguins. Includes scientific discussions on penguin conservation, profiles, facts and tips on where to see them in Antarctica.
Melting Away, Images of the Arctic and Antarctic
by Camille Seaman
In her masterful series of 75 portraits and essays, Camille Seaman shows how climate change has wreaked havoc on both the North and South Poles.
Antarctic Wildlife
by James Lowen
Produced by a shipboard naturalist, this handy identification guide focuses on the Beagle Channel, Drake and Peninsula regions.
Antarctica, A Guide to the Wildlife
by Tony Soper
Designed for the field, this compact handbook features all the species of birds, seals and whales the traveler is likely to encounter on an Antarctic voyage.
Antarctica, A Call to Action
by Sebastian Copeland
Copeland's collection of striking photographs includes a three-page list of sensible suggestions to protect the planet.
End of the Earth, Voyaging to Antarctica
by Peter Matthiessen
In this fine book, the result of two voyages, Matthiessen captures the magic of polar landscapes and wildlife, along with the camaraderie of a ship-based polar expedition.
Endurance, Shackleton's Incredible Voyage
by Alfred Lansing
Lansing's gripping day-by-day story of Shackleton's legendary perseverance is essential reading for any Antarctic traveler.
The Heart of the Great Alone: Scott, Shackleton and Antarctic Photography
by Sophie Gordon, David Hempleman-Adams, Emma Stuart
Here in one handsome book are hundreds of haunting photographs by Herbert George Ponting and Frank Hurley, drawn from the albums they created during the two most famous Antarctic explorations. The stunning images are accompanied by lively essays, maps, paintings and other ephemera from the Royal Collection
The Last Viking, The Life of Roald Amundsen
by Stephen R. Bown
Bown plumbs newspaper archives, Amundsen's own words and contemporary accounts for this tale of the unusual and hugely accomplished explorer, first to the South Pole, first across both the Northeast and Northwest passages and a pioneer of polar aviation.
Start Enrolling

Afternoon: You will be joined by your Study Leader and fellow participants arriving from #21788. Together, you will all attend a briefing with the expedition staff to provide important information about your upcoming voyage and review the essential guidelines for your Antarctic voyage.

Dinner: Enjoy a welcome dinner to meet your Antarctica expedition staff and other Antarctica travelers. The following voyage to Antarctica aboard the Ocean Nova will also include non-Road Scholar passengers from around the world.

Activity note: The distance between the airfield and the shoreline is a downhill 15-20 minute (1.5 mile) easy walk. Staff is available to drive those passengers who prefer not to walk. The transfer to the ship is done by Zodiac boat. Mobility is essential for getting on and off the ship.

Breakfast: Breakfast at the hotel

Morning: Morning at leisure as you prepare for your flight to Antarctica. Transfer to the airport. Your Antarctic adventure begins with a two-hour flight from Punta Arenas to King George Island, in the South Shetland Islands.

Afternoon: Arrive in Antarctica! As you exit the airplane, the clear Antarctic air fills your lungs for the first time. Explore the surrounding Chile's Frei Station and Russia's Bellingshausen station, before boarding a Zodiac to embark your vessel. At Frei Base, facilities are quite essential - do not expect an air and a sea terminal as you may find in most cities of the world. The airfield, called Aerodromo Teniente Marsh, is located in the heights of Frei Base. At a distance of about 3km (1.5miles) downhill, close to the shoreline of Fildes Bay, passengers can take advantage of transit facilities. Here hot drinks are available, as well as toilets. The "Ocean Nova" is anchored in the middle of Fildes Bay. Since at Frei Station there are no docking facilities, the transfer of passengers and their luggage between the coast and the vessel is performed by Zodiac Boats. Staff will take care of transporting participant luggage on board the aircraft and the ship. Participants are required to take care only of their personal carry on luggage. At Frei Base you will be provided with a lightweight life jacket that must be worn at all times in the Zodiac while cruising.

Dinner: Dinner on board the MV Ocean Nova

Morning: No journey to Antarctica is the same, and flexibility is the key to a successful voyage. The on board Expedition Team sets the voyage route to take advantage of the ever-changing opportunities provided by nature, crafting unique and extraordinary experience each time. While the exact itinerary changes with each expedition, you will explore several spots that offer the best possible overview of the varied Antarctic environment. Your voyage may include visits to sites such as Paulet Island, Hope Bay, Port Lockroy, Petermann Island, Paradise Bay, Deception Island, the Lemaire Channel or many other magnificent places.

Breakfast: Breakfast on board the ship

Morning: Cruise between the South Shetland Islands and the western coast of the Antarctic Peninsula, sailing along ice-filled fjords and among spectacular icebergs, while enjoying the company of sea birds, penguins, seals and whales. Each day, disembark by Zodiac and explore the landscape together with expert polar guides.

Morning: Cruise between the South Shetland Islands and the western coast of the Antarctic Peninsula, sailing along ice-filled fjords and among spectacular icebergs, while enjoying the compnay of sea birds, penguins, seals and whales. Each day, disembark by Zodiac and explore the landscape together with expert polar guides.

Morning: Cruise between the South Shetland Islands and the western coast of the Antarctic Peninsula, sailing along ice-filled fjords and among spectacular icebergs, while enjoying the compnay of sea birds, penguins, seals and whales. Each day, disembark by Zodiac and explore the landscape together with expert polar guides.

Morning: Return to King George Island and bid farewell to Antarctica before boarding the flight back to Punta Arenas.

Lunch: Lunch at a local restaurant.

Afternoon: Afternoon at leisure to pack and prepare for your flight home.

Dinner: Farewell dinner at the hotel.

Breakfast: Breakfast at the hotel

A fascinating experience with a disappearing world.

Willoughby Hills, OH
(5) a year ago

The kayak option struck me as expensive, but turned out to be well worth the cost as we saw the islands from another perspective and paddled among the ice floes. The crystal-clear water was awesome.

Our “Mission to Antarctica” surpassed my expectations! What a wild remote wonderland!!! The Antarctica 21 staff and the ship Ocean Nova were truly wonderful!!! Take Polar Plunge!!!!