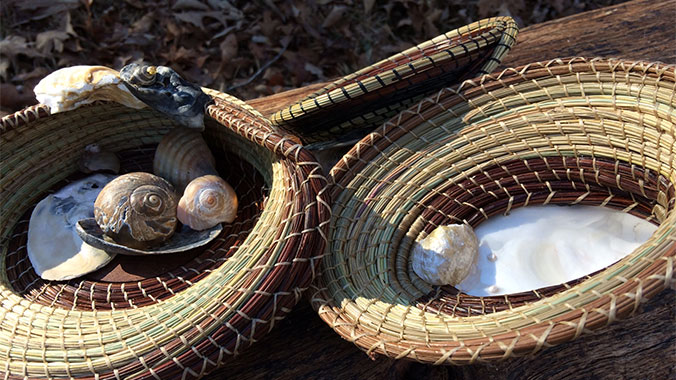 Wishlist Share Start
Explore the art of basketry alongside an award-winning instructor on historic Wallops Island. Plus, learn about island ecology and enjoy a traditional seafood feast!
Rating (5)
Activity Level

Come to majestic Wallops Island to learn a craft that has been woven into indigenous basketry forms throughout the world with Chincoteague Bay Field Station. Coiled sea grass basketry reflects the beauty of the barrier island marshes, and you’ll learn to create your own in a small group setting with an award-winning instructor. In addition to learning basket weaving, gain a special appreciation through field trips and lectures for the island ecology and what’s being done to protect this fragile and ever-changing habitat.
Activity Level
On Your Feet
Walking up to a mile on uneven ground.

The Retreat Difference: This unique, often basic and no-frills experience at a Road Scholar Retreat includes opportunities for early morning exercise, interaction with the local community for insight into local life, an authentic farm-to-table or locally sourced meal, a live performance or event, and a value-priced single room. ATTENTION FOREIGN NATIONALS: Part of this program takes place on Wallops Island, which is a restricted access NASA base. In order to participate in the Wallops Island activities, all foreign nationals must complete additional paperwork at least 6 weeks in advance to be allowed access onto the base. Access is then subject to approval by NASA Wallops Island base. If you are a foreign national enrolled in this program, please contact the program provider directly at julie@cbfieldstation.org to request the required forms.
Featured Expert
All Experts

Pamela Zimmerman
Pamela Zimmerman is a nationally renowned fiber artist whose contemporary works and horsehair miniatures have been showcased in galleries nationwide, receiving over 500 awards. For her distinct work, she was selected by the World Crafts Council, a division UNESCO to be listed as “North American Craftsman” in their Gallery of Fiber Arts in the US. Holding a BS in recreational programming from the University of Maryland, she has prepared and presented activities for all ages, working with zoos, libraries, schools, National Parks and more.

Activity note: Field station check-in from 3:00 p.m. Please keep in mind that the workshop schedule is tentative and subject to change due to weather, access, seasons, and other factors. When you arrive, you will receive an updated schedule specially tailored for that particular week.

Afternoon: Program Registration: 3:00-5:00 p.m. Join us at the Road Scholar table in the Education Center to register with the program staff and get your room assignment, welcome packet containing the up-to-date schedule that reflects any changes, other important information, and to confirm the time and location of the Orientation session. If you expect to arrive late, please contact the Chincoteague Bay Field Station for instructions on where to meet the group.

Dinner: In the cafeteria, dining staff will prepare and serve your meal cafeteria style, with options ranging from a hot meal to a diverse salad bar.

Evening: Orientation. The Group Leader will greet everyone and lead introductions. We will review the up-to-date program schedule, discuss roles and responsibilities, logistics, safety guidelines, emergency procedures, and answer questions. This is a Road Scholar Retreats program. Due to the nature of this particular program, community interaction and evening entertainment are not on the schedule. This is to ensure that you have enough time to work on your projects. Periods in the schedule designated as “Free time” and “At leisure” offer opportunities to do what you like and make your experience even more meaningful and memorable according to your personal preferences. The Group Leader will be happy to offer suggestions. Program activities, schedules, personnel, and indicated distances or times may change due to local circumstances/conditions. In the event of changes, we will alert you as quickly as possible. Thank you for your understanding. Following orientation, we will have an introduction to basket coiling.

Breakfast: In the Chincoteague Bay Field Station cafeteria, our staff will present an array of fruits, hot and cold cereals, meats, breads/biscuits, eggs, and pancakes for your choosing. Coffee, tea, water, and a selection of soft drinks are available.

Morning: Our basketry instructor will help us get started with making our first baskets.

Lunch: The Eastern Shore is home to some outstanding American fare and seafood restaurants. We will sample one of these for lunch today. On Day One, we’ll receive the menu for this restaurant and make our selections in advance.

Afternoon: We’ll head out via field station bus to NASA’s Wallops Island base, where restricted access has preserved an environment that is great for education as well as shelling. We will first visit the marsh to learn about this unique ecosystem and gather grasses sustainably for your basket. Next, we will travel to the beach to explore a beautiful, undeveloped shoreline and gather shells, which we will learn how to incorporate into our baskets. NOTE: Our access to Wallops Island will depend on the security level of the base at the time, which is influenced by a number of factors independent of the Chincoteague Bay Field Station and its actions.

Evening: This evening you will continue to work on your first basket as well as learn how to drill the starting base for your next basket. You may even want to use one of the shells you collected earlier on Wallops Island.

Morning: This is our big coiling day! We will continue to work on our baskets and learn additional stitching techniques.

Lunch: In the cafeteria.

Afternoon: We will learn how to start our next basket from a drilled shell base and add accent beads.

Evening: We’ll learn all about barrier islands, like Wallops and Assateague, from our field station staff. These unique ecosystems are one of the world's most biologically productive areas and are constantly changing. We’ll discover their natural history, importance, and future.

Morning: For our next basket, we’ll learn how to begin coiling without using a starting base.

Lunch: In the cafeteria.

Afternoon: Free time. This block of time has been set aside for your personal independent exploration to see and do what interests you most. Please refer to the list of Free Time Opportunities. The Group Leader will be happy to offer suggestions.

Evening: We’ll continue working on our basket creations as we watch the classic 1961 film, ‘Misty.’ The film and the 1947 children’s novel it was based on – Marguerite Henry’s ‘Misty of Chincoteague’ – are widely credited with driving tourists to Chincoteague in the hopes of spotting the area’s famous wild ponies. Tomorrow morning, we’ll have a chance to see them ourselves!

Activity note: Getting on/off buses. Driving up to 1.5 hours with several stops on the Refuge.

Morning: We’ll spend the morning touring Chincoteague National Wildlife Refuge and Assateague Island National Seashore. With more than 14,000 acres of beach, dunes, marsh, and maritime forest, we’ll have opportunities to see plenty of birds and other amazing wildlife. To top it off, we will drive through one of the little-seen restricted access areas of the refuge to maximize our chances of viewing the famous Chincoteague wild ponies.

Lunch: We will pack our own lunches at the Dining Hall before heading out for the day. Lunch options will include a variety of sandwiches, fruits, chips, and cookies. Please bring a refillable water bottle. Extra water will be supplied by our guides. We will then enjoy lunch on the Wildlife Refuge.

Afternoon: Now that we have our own baskets, we’ll learn how to reinforce our creations through the use of beeswax.

Dinner: In the cafeteria, we’ll enjoy a family-style seafood feast! Sample whatever fresh, local seafood is currently in season - possible options may include crabs, oysters, clams, and/or shrimp. If seafood isn't your favorite, kielbasa sausage, chicken, and roasted vegetables will also be available. Beverage options include coffee, tea, water, and a selection of juices and sodas.

Evening: We’ll put the finishing touches on our baskets using elements gathered earlier in the week to decorate and embellish our creations. We can purchase any supplies we need for future projects and polish the skills we've learned. Prepare for check-out and departure in the morning.

Breakfast: In the cafeteria. This concludes our program.

Meals
14 Meals
5 Breakfasts
4 Lunches
5 Dinners
The following choices may be available when requested in advance: Vegetarian
Lodging
Lodgings may differ by date. Select a date to see the lodgings specific to that date.
Oct 17, 2021 - Oct 22, 2021
Chincoteague Bay Field Station
5 nights
Wallops Island
The Chincoteague Bay Field Station is a residential environmental learning center and field station. Participants are accommodated in modern, suite-style rooms with four double-occupancy bedrooms with central heat and air-conditioning. Bathrooms are not connected to bedrooms but are shared by only two rooms. The two-story residence halls have no elevator and are across campus from meeting spaces and the cafeteria. A large campus lounge allows for camaraderie with fellow Road Scholars, with comfortable chairs and sofas, tables to play games and a TV. Meals are served in a common dining room where residents other than Road Scholars will dine. Good to know: No TVs in rooms. Wi-Fi in main Education Center. Coin-operated laundry room. Housekeeping once a week. Most meals served buffet-style; bus own table.
See All Lodging Options
3 Reviews
Sort by
Most Recent
5 Average

Enjoyed my trip. I had a bit of a rough start with travel delays, but arrived for the non-Road Scholar portion in Colonial Williamsburg for a very interesting 2 days with beautiful weather. The great weather continued for my drive from Williamsburg across the Chesapeake Bay Bridge to Wallops Island. The accomodations are pretty rustic. The food at the station is adequate. Meals off-site were great. We got to see lots of ponies, and got great instruction for making our pine needle baskets. Wish there was more built-in opportunites for stretching and walking--sitting and making baskets can make these creaky old bones and muscles a bit sore!

I really enjoyed this program. Pamela and her aid,Vickie, went above and beyond with individual instruction. Ryn, the field station educater was full of knowledge and bad jokes. am considering a repeat of this program.. I completed 2 baskets, and a start of a third