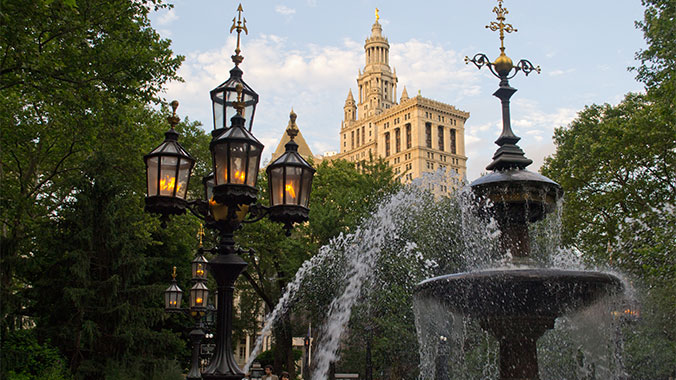 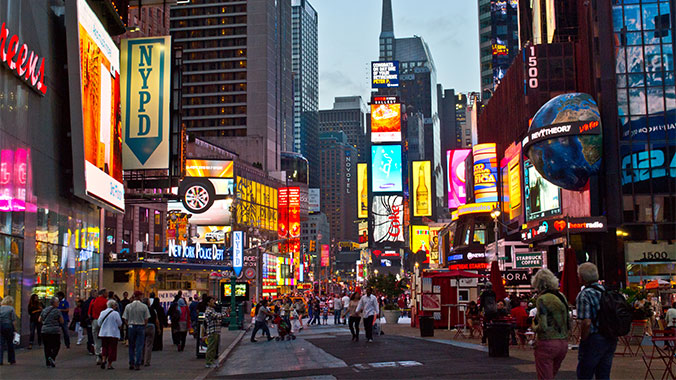 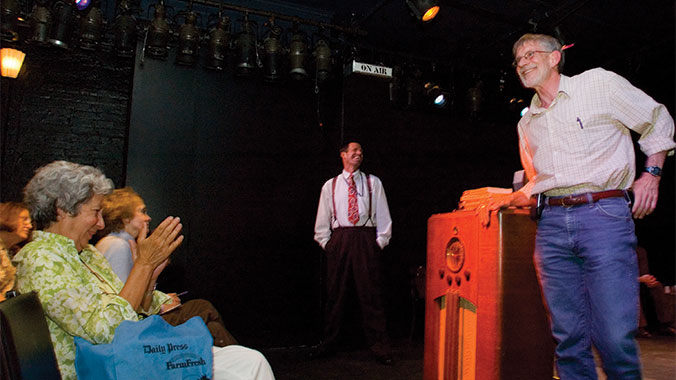 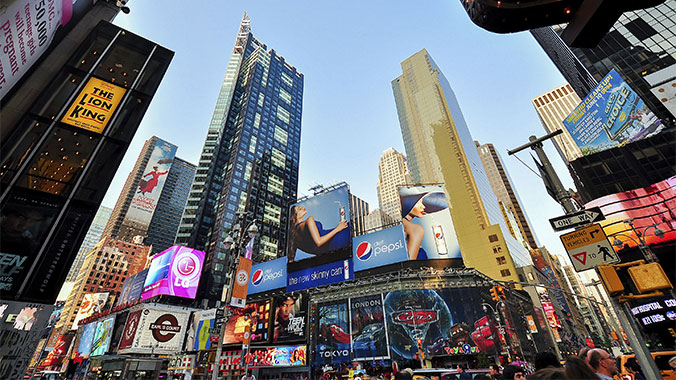 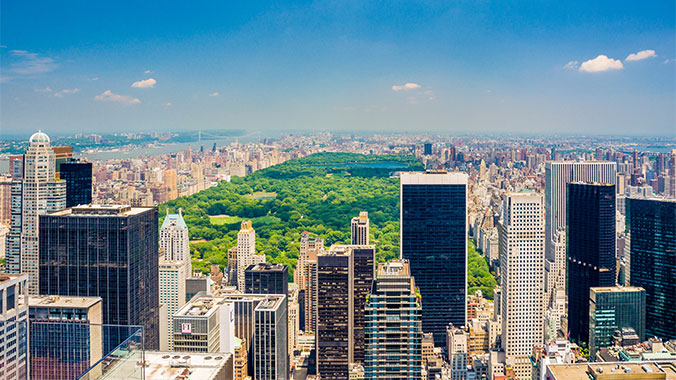 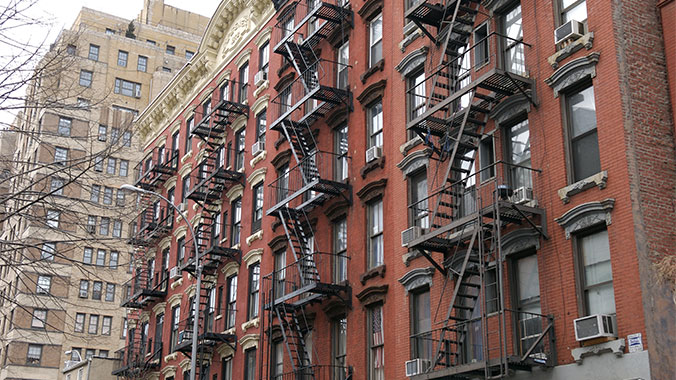 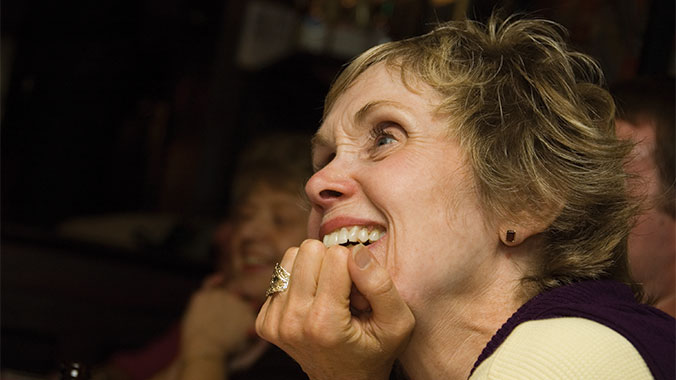 Wishlist Share Start
Go behind the scenes of the entertainment hub of the east coast, New York City. Learn what happens off screen and after curtain call as you delve into the showbiz industry!
new
Activity Level

Go on set and behind the scenes as you explore the entertainment capital of the east coast: New York City. Get an inside look beyond the glitz and glamour of the theater, film and television industry as you learn about what really goes into making a production from film, TV and Broadway professionals. Explore famous film locations, try your hand at production yourself during a visit to the iconic NBC Studios and see a Broadway show on this deep dive into show business in the Big Apple.
Activity Level
Let's Go!
Walking up to six miles on city streets and sidewalks, public transportation, stairs.

Daniel Egan
Daniel Egan has degrees in music theory from St. Olaf, the Eastman School of Music and Yale, where he is on faculty. He has appeared as soloist or ensemble singer with the New York Philharmonic, Opera Orchestra of New York, Brooklyn Academy of Music, and was in the permanent ensemble at New York City Opera. His recordings include “Sweeney Todd” with the New York Philharmonic and backup vocals for Patti Page’s "Live at Carnegie Hall: The 50th Anniversary Concert.” Both earned Grammy nominations.

Afternoon: Program Registration. After 4:00 p.m., come to the hotel’s boardroom located on the lower level to register with the program staff and get your welcome packet containing the up-to-date schedule that reflects any changes, other important information, and to confirm the time and location of the Orientation session. If you arrive late, please ask for your packet when you check in. Orientation: 5:00 p.m. The Group Leader will greet everyone and lead introductions. We will review the up-to-date program schedule, discuss roles and responsibilities, logistics, safety guidelines, emergency procedures, and answer questions. Group Leaders on our programs are highly trained and knowledgeable about many aspects of the city. We will also have the benefit of other local experts who will provide information and commentary on areas of particular interest. If you want to attend an event independently such as a Broadway show or a performance at Carnegie Hall, Lincoln Center, etc., you may want to order tickets in advance. Same-day tickets for many performances are available at 20% to 50% off regular prices at the TKTS Discount Booth. The Group Leader will be happy to give advice on how to make it go as smoothly as possible. See www.tdf.org for details. Periods in the schedule designated as “Free time” and “At leisure” offer opportunities to do what you like and make your experience even more meaningful and memorable according to your personal preferences. The Group Leader will be happy to offer suggestions. Program activities, schedules, personnel, and indicated distances or times may change due to local circumstances/conditions. In the event of changes, we will alert you as quickly as possible. Thank you for your understanding.

Dinner: We will walk to a neighborhood restaurant with our Group Leader for a plated meal with coffee, tea, water included; other beverages available for purchase.

Evening: We’ll walk back to the hotel with our Group Leader to start becoming familiar with the neighborhood around the Times Square Theater District. We’ll learn how it became synonymous with the Broadway theater, how to utilize the immensely popular TKTS Booth for discount tickets, and see some of the iconic theaters that have housed the great musicals about New York from Bernstein’s “Wonderful Town” (1953) to Lin-Manuel Miranda’s “Hamilton” (2015). Continue getting to know your fellow Road Scholars, settle in, and get a good night’s rest for the day ahead.

Activity note: Use of New York City subway system. Walking up to 5 miles throughout the day; city streets and sidewalks, stairs.

Breakfast: In the hotel breakfast room, choose what you like from the breakfast buffet with milk, juice, and coffee included.

Morning: We’ll be joined by a local expert and look at New York City through the “lens” of TV, film, and theater with an illustrated talk and overview of the marriage between these industries and this city. Next, we’ll turn our focus to television as we’re joined by a professional who creates shows in this medium. Our lively discussion will focus on what makes TV work.

Lunch: At the hotel, we’ll have boxed lunches with a choice of sandwich or salad, chips, sweet treat, fruit, water.

Afternoon: Next, we’ll take the subway to Rockefeller Center. Originally conceived as a new home for The Metropolitan Opera, the 1929 stock market crash forever changed the fortunes of Rockefeller Center. The Met chose to stay put elsewhere and John D. Rockefeller, Jr. persuaded the Radio Corporation of America to anchor his new development instead. RCA required a state-of-the-art building to house the studio space for its new subsidiary: the National Broadcasting Company, that created programming not only for the new medium of radio but was experimenting with a new technology called “television.” Today, 30 Rockefeller Plaza continues to house the world headquarters of NBC and its affiliates including MSNBC as well as the broadcast studios of “Saturday Night Live,” “The Tonight Show Starring Jimmy Fallon,” and “NBC Nightly News.” An NBC page will be our host as we go behind the scenes at 30 Rock. We’ll explore at least two studios and learn about aspects of the TV production process such as scriptwriting, producing, and how the finished product reaches its audience. After the field trip, we’ll return to the hotel by subway.

Dinner: At a restaurant near the hotel, we’ll have a plated meal with coffee, tea, water included; other beverages available for purchase.

Evening: We’ll visit the observation deck at a legendary location synonymous with movies such as “King Kong,” “Sleepless in Seattle,” and a host of others: The Empire State Building.

Activity note: Use of New York City subway. Walking up to 6 miles throughout the day; city streets and sidewalks, some stairs.

Morning: We’ll be joined in the meeting room by a local expert who will highlight some of the neighborhoods that have been featured in television and movies. We’ll then head out on a walking field trip through Midtown Manhattan to see some of the locations we’ve discussed, ending up at historic Grand Central Terminal, the backdrop for film adventures from “Twentieth Century” (1934) to “North by Northwest” (1959) and many more.

Lunch: At a restaurant near Grand Central Terminal, choose what you like from a sandwich buffet.

Afternoon: With our Group Leader, we’ll take the subway to the Museum of the Moving Image in Queens for an interactive, hands-on experience. This is America’s only museum dedicated to the art, history, technique, and technology of the moving image in all its forms. The core exhibition — “Behind the Screen” — features more than 1,400 artifacts, from 19th-century optical toys to video games, interactive experiences, audiovisual material, and artworks that immerse visitors in the creative process of making moving images.

Dinner: We’ll head down to the Lower East Side of Manhattan for dinner at The Metrograph Commissary. Just north of Canal Street, this section of town was once home to a great number of movie palaces. Eddie Cantor, who grew up in the poor Jewish tenements of the area, premiered many of his hit films nearby. The restaurant was inspired by Hollywood studio cafeterias from the golden age of the silver screen when everyone on the set dined together.

Evening: From the restaurant, we’ll proceed into one of The Metrograph’s screening rooms. This boutique “indie” cinemaplex — founded by writer-director-designer Alexander Olch — opened in 2017. Its curated programming showcases work from around the world, both retrospectives and new films, with state-of-the-art digital projection.

Activity note: Use of New York City subway. Walking up to 5 miles throughout the day; city streets and sidewalks, stairs.

Morning: We’ll take the subway up to Central Park, where a local expert will lead us on a stroll to locations made famous in countless films and TV shows.

Lunch: On your own to enjoy what you like.

Afternoon: Free time. Take this opportunity for personal independent exploration to see and do what interests you most. The Group Leader will be happy to offer suggestions.

Activity note: Use of New York City subway. Walking up to 5 miles throughout the day; city streets and sidewalks, stairs.

Morning: We’ll visit one of the oldest Broadway theaters, the New Amsterdam. We’ll learn how this historic theater went from hosting the toast of the town during the 1920s Ziegfeld Follies era to degeneration and back again as the showplace of 42nd Street. The story of the New Amsterdam is the story of Times Square. Returning to the hotel, a theater historian will join us in our meeting room for an illustrated lecture on the storied and rollicking history of the Broadway musical.

Lunch: On your own to have what you like.

Afternoon: We’ll reconvene in our meeting room where we will meet an actor from the Broadway show we’ll be seeing this evening. We’ll learn what it takes to be a working New York actor and whether Broadway is really as glamorous as the movies lead us to believe.

Evening: We’ll attend a Broadway musical tonight. Our program was planned far in advance when performance details were not confirmed. When available, the information will be posted on the Road Scholar website under this program number and will also be included in preparatory materials sent following enrollment. Returning to the hotel, prepare for check-out and departure after our closing session in the morning.

Morning: In the meeting room, we’ll gather with our Group Leader for a wrap-up session and lively discussion about our experience with theater, film, and TV in New York. We expect to end by about 10:00 a.m. This concludes our program. If you are transferring to another Road Scholar program, detailed instructions are included in your Information Packet for that program. We hope you enjoy Road Scholar learning adventures and look forward to having you on another rewarding program in the future. Don’t forget to join our Facebook page and follow us on Instagram. Best wishes for all your journeys!