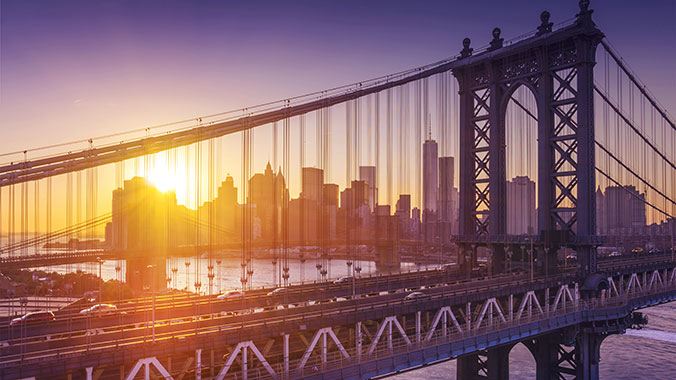 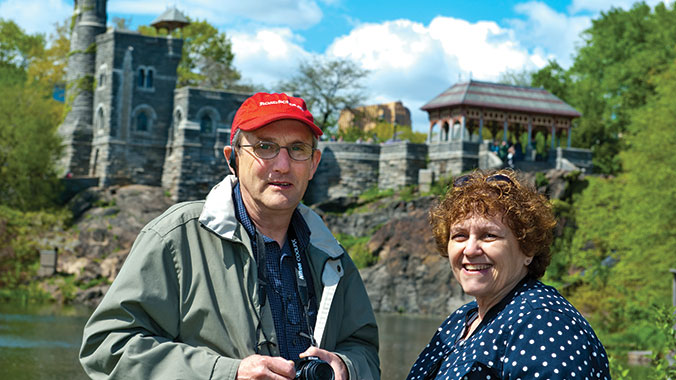 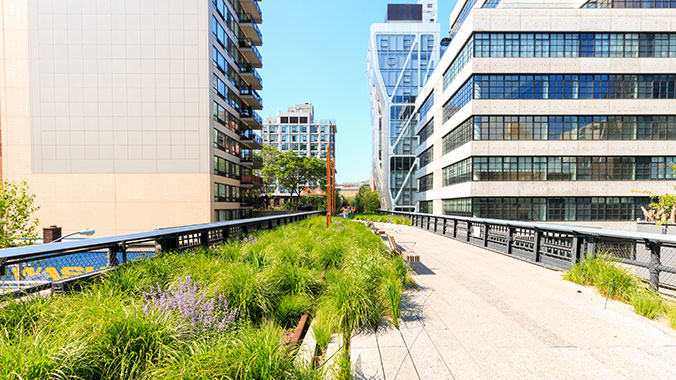 Wishlist Share Start
Dive deep into the story of New York through its culturally rich neighborhoods. Local experts will lead you through hidden highlights and history and share what makes each one unique.
Rating (5)
Activity Level

Already seen the major tourist sights of New York? Join Road Scholar experts for a deeper dive into the most culturally rich neighborhoods of New York City. Experience the city on foot like a true New Yorker as local experts introduce you to the hidden history you haven’t heard of and out-of-the-way restaurants you’d never find on your own. When you’re not walking through the city with your small group of Road Scholars, enjoy plenty of time on your own and a metro card for the duration of your stay to explore this incredible city on your own.
Activity Level
Let's Go!
Walking up to five miles per day over uneven ground, standing up to one hour, climbing two flights of stairs consecutively.

Program includes independent time to explore the city. Group Leaders will provide directions for self-directed excursions. Suggestions for free-time activities provided in preparatory materials. There are lots of different ways to explore New York City with us depending on your preference of pace, program inclusions and time available for travel. Visit www.roadscholar.org/collections/nyc to explore them all!
Featured Expert
All Experts

Karl Baudendistel
A New York City resident for more than 25 years, Karl Baudendistel loves sharing his knowledge of the city with visitors from around the world. Having spent 20 years overseeing ‘the business of show business’ for numerous Broadway and touring productions, chances are he’s been to a city near you. Karl is a member of The Association of Theatrical Press Agents and Managers, is a trained sommelier and was educated at New York University’s Tisch School of the Arts.

Karl Baudendistel
View biography
<%= Bio %>
Suggested Reading List
View 11 books
The Island at the Center of the World
by Russell Shorto
Time and Again
by Jack Finney
Downtown: My Manhattan
by Peter Hamill
Triangle: The Fire That Changed America
by David vonDrehle
Here Is New York
by E. B. White
New York
by Edward Rutherford
The Great Bridge
by David McCullough
722 Miles: The Building of the Subways and How They Transformed New York
by Clifton Hood
Let The Great World Spin
by Colum McCann
Five Points
by Tyler Anbinder
Washington Square
by Henry James
Start Enrolling

Afternoon: Program Registration: 4:00 p.m. After 4:00 p.m., come to the hotel's board room located on the lower level to register with the program staff and get your welcome packet containing the up-to-date schedule that reflects any changes, other important information, and to confirm the time and location of the Orientation session. If you arrive late, please ask for your packet when you check in. Orientation: 5:00 p.m. The Group Leader will greet everyone and lead introductions. We will review the up-to-date program schedule, discuss roles and responsibilities, logistics, safety guidelines, emergency procedures, and answer questions. Before you leave home, we highly recommend downloading the “Transit • Bus & Subway Times” app (https://transitapp.com/ — select New York City) to your phone and familiarize yourself with the transit system. We also suggest you come with a “bucket list” of sites you want to see and things you want to do so the Group Leader can assist you most effectively. Please refer to the list of Free Time Opportunities for ideas. Our Group Leader will be happy to offer suggestions and help you organize your plans to make the most of this experience. Our Group Leader is a knowledgeable professional who will serve as an educational resource in addition to leading field trips. We’ll also have presentations by local experts at different sites. Program activities, schedules, personnel, and indicated distances or times may change due to local circumstances/conditions. In the event of changes, we will alert you as quickly as possible. Thank you for your understanding.

Dinner: At a nearby restaurant, we’ll enjoy our first meal together with coffee, tea, water included; other beverages available for purchase.

Evening: On our way back to the hotel, we’ll have a walk to become familiar with the neighborhood. Continue getting to know your fellow Road Scholars, settle in, and get a good night’s rest for the day ahead.

Breakfast: In the hotel, choose what you like from the extensive breakfast buffet. Coffee and tea are available in the lobby 24 hours a day.

Morning: We’ll take the subway to the Lower East Side and visit The Tenement Museum, a National Historic Site. With a member of the museum staff, we’ll explore 97 Orchard Street, a restored tenement building, and gain insights into the lives of actual tenants who lived in these rooms that look just as they did when they were inhabited. The National Park Service has estimated that some 7,000 people from more than 20 nations lived here between 1863 and 1935. One of thousands of similar tenements on the Lower East Side, it represents the conditions in which millions of immigrants found themselves when they first came to America. We’ll learn about their dreams and the challenges they faced in making new lives for themselves and their families.

Lunch: This meal has been excluded from the program cost and is on your own to enjoy what you like. The Group Leader will be happy to offer suggestions. Katz’s Deli, a Lower East Side tradition since 1888, is the overwhelming popular choice where you can recall the film “When Harry Met Sally” and “I’ll have what she’s having.”

Dinner: We'll have a plated meal at a neighborhood restaurant near the hotel. Coffee, tea, water included, other beverages available for purchase.

Morning: We’ll travel by subway down to Greenwich Village where we will explore the fascinating West Village on a stroll highlighting its bohemian, literary, and musical history. This neighborhood's storied past can be evoked simply by listing a few of it's more famous former residents and locales: Henry James; Bob Dylan; Jack Kerouac; Edward Hopper; Peter, Paul & Mary; The Triangle Shirtwaist Factory, The Stonewall Inn....

Lunch: We'll stop for lunch at a local Village restaurant. Coffee, Tea and soft drinks are included, other beverages available for purchase.

Afternoon: Crossing Washington Square Park and Broadway take us into The East Village and a visit to The Merchant's House Museum to see how the “other half” lived. Built in 1832, this National Historic Landmark building is the city’s only completely intact family home from the 19th century. It was the home of a prosperous merchant, Seabury Tredwell, and stayed in the Tredwell family for nearly a century. The museum collection of nearly 2,500 items includes period furniture, lighting ranging from antique candle stands to gas chandeliers, as well as fashions and textiles. It’s also reputed to be Manhattan’s most haunted house! A docent will lead our exploration.

Morning: With our local expert, we'll take a morning stroll over The Brooklyn Bridge. Completed in 1883, this modern architectural marvel is often credited with making New York the city it is today. At the time of the bridge's completion, New York and Brooklyn were two entirely separate cities. In fact, Brooklyn ranked as the 4th largest city in the U.S. With this physical connection, the two cities came to increasingly rely on each other to the point that in 1898 they consolidated along with The Bronx, Queens and Staten Island to create greater NYC, the city we know today as comprising 5 Boroughs. Later in the morning, we will visit the South Street Seaport Museum to learn about the growth of the city as a major seaport. We'll explore this wonderful landmarked neighborhood and learn about the Dutch and British origins of the the city.

Lunch: On your own in lower Manhattan. Your Group Leader will be happy to offer suggestions.

Afternoon: We'll regroup for a stroll across lower Manhattan to the World Trade Center. Once again, a thriving area of town, this neighborhood will be forever impacted by the events of September 11, 2001. We will spend our afternoon visiting the 9/11 Memorial and Museum. Our local expert will interpret the Memorial for us but as the exhibits in the Museum often evoke extreme emotion, our included visit will be self-guided. We will return to the hotel via subway which we will catch inside the Oculus transportation hub, designed by the architect Santiago Calatrava to evoke a peace dove in flight.

This is a great way to see some of the lesser known attractions of Manhattan.

This program is perfect for those who want to tour NYC with a guide during the day and select your own entertainment at night.

Last year, my husband and I participated in the 5 boroughs in 5 days program and enjoyed it so much,we came back this year to participate in City Walks. Angela was our leader both years and she is an excellent tour guide. She was born and raised in NYC and seems to know everything. The sites we visited were all interesting. Meals were very good and dinners are early enough that you can get to a play if you want. There was plenty of free time to pursue your own interests. We both grew up in the NYC area and still enjoyed this program. We would highly recommend it.

Springfield, OH
(5) a year ago

I completed a walking tour of New York City today. What a great program. I so enjoyed seeing "in depth" specific neighborhoods. 2 museums we visited I probably would not have known about except for the tour. Both were extremely interesting. I visited and experienced parts of New York that I had read about. What fun to actually be there. All of our guides were excellent.