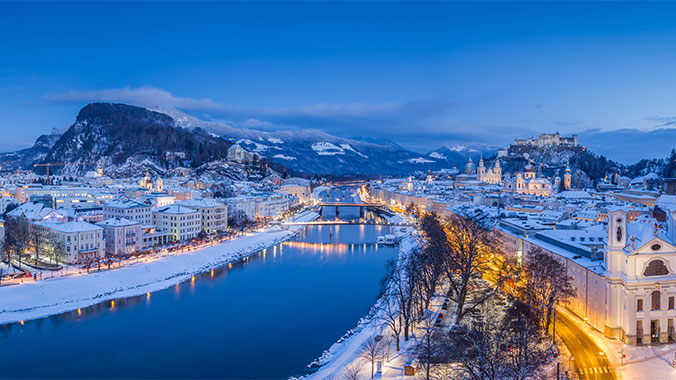 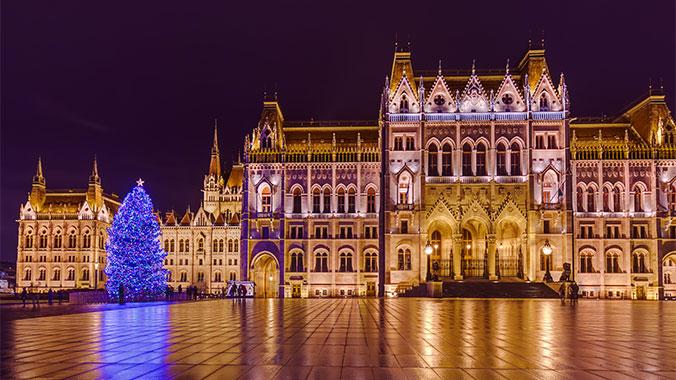 Wishlist Share Start
Celebrate the holiday traditions and markets of Central Europe during the peaceful off-season for a festive and authentic local experience.
new
Activity Level

Winter may be Europe’s off-season for visitors, but it’s peak season for holiday splendor! Discover millennia old traditions and bustling modern Christmas markets in Central Europe aboard this festive river voyage. Watch as quaint towns and old-world cities come alive with holiday cheer as you sail from Austria to Slovakia to Hungary alongside our experts. Delve into the history behind holiday traditions and learn about the culture that surrounds celebrated Christmas markets, as you voyage from city to city for a truly authentic cultural discovery. There’s no better way to experience Central Europe like a local than during the most wonderful time of the year!
Activity Level
Keep the Pace

Balázs Füzesi
Balázs Füzesi was born and raised in the city of Pécs, in southwestern Hungary. He has earned bachelor’s degrees in communications and in business administration and has also completed a license for leading educational excursions in his native country. He has pursued study and work with members of other nationalities whenever possible, spending a high school year in Denmark and working abroad in Greenland, London and the U.S. He credits his grandmother for his love of travel and exploration; she was an avid traveler throughout her entire life.

Afternoon: Orientation 5:00 p.m.: The Group Leader will greet everyone and lead introductions. We will review the program theme, the up-to-date Daily Schedule and any changes, discuss safety guidelines, emergency procedures, roles and responsibilities, and answer any questions you may have. This is a Road Scholar Adventures Afloat program. In addition to lectures and field trips exclusively for our Road Scholar group, you are invited to take advantage of activities and events aboard ship that are separate from the Road Scholar program. The time available in each port is set by the cruise line. Whenever possible, the Road Scholar daily schedule indicates port arrival and departure times (subject to change by the cruise line). This may mean that free time in port is limited. Regardless of the time in port, Road Scholar delivers a robust educational program. All routes, field trips, and excursions are subject to change as weather and sea conditions may affect the itinerary. Sea conditions could affect the progress of the ship, making it run late and sometimes miss ports because it is not safe to dock. Because of this, the cruise itinerary should always be regarded as provisional. The operators reserve the right to change the content of field trips and excursions without prior notice. Periods in the schedule designated as “Free time” and “At leisure” offer opportunities to do what you like and make your experience even more meaningful and memorable according to your personal preferences. The Group Leader will be happy to offer suggestions. Program activities, schedules, personnel, and indicated distances or times may change due to local circumstances/conditions. In the event of changes, we will alert you as quickly as possible. Thank you for your understanding.

Dinner: We will have a welcome dinner at the on board the boat. Water, wine and beer is included in during your time on board.

Morning: We will leave the boat and set out by motorcoach and on foot along the Vienna Ring Boulevard. It was built in the 19th century, when Emperor Franz Joseph decreed the demolition of Vienna's medieval fortifications and ramparts to make room for the city's expansion. This “boulevard of splendor” is lined with many of the most important political and cultural institutions, such as parliament and town hall, Royal Palace, the prestigious State Opera and Burgtheater, University of Vienna, and many large former palaces of the nouveau riche of the day.

Afternoon: Following a motorcoach drive from the boat, we will spend the day reveling in the royal lifestyle of the 18th century at the former Imperial Palace of Vienna, Schönbrunn Palace. This 1,441-room Baroque castle is one of the most important architectural, cultural, and historically profound monuments in Austria, its storied past chronicling the dramatic six century reign of the Habsburg dynasty.

Dinner: On board. Dinners on board are 3- or 4-course, served meals.

Activity note: Up to 2 miles of walking in the morning over cobblestones and pavement. Up to 2 hours of walking at Melk Abbey on interior floors with some stairs.

Morning: Beginning from the docked boat, we will take a stroll through the beautiful village of Dürnstein. We will pass its most significant sites and hear legends about the town, its ruined castle, and King Richard I of England, also known as Richard the Lionheart, who was held captive after his return from the Third Crusade in 1192. Reaching Dürnstein Abbey, we’ll enjoy a visit into the interior of this picturesque treasure. Established in 1410 and rebuilt in 1710 in the elaborate Baroque style, the abbey is the centerpiece of the town’s photogenic riverside scene. We’ll then return to the boat.

Afternoon: We will depart from the boat for a scenic drive by motorcoach to the top of the hill, where we will arrive at the magnificent Baroque Abbey of Melk for an expert-led visit through one of the most famous monastic sites of the world. Our field trip will lead us through the huge complex of this Benedictine Abbey, which dominates the countryside, and it will end in the impressive library, with countless medieval manuscripts. We’ll then have a chance to stroll the cobblestone lanes of the Old Town on our own, with its centuries-old, fairy tale buildings. In the late afternoon, we’ll board the motorcoach for a drive back to the boat in Melk, or time permitting, a short walk back through the village.

Morning: We will be able to choose between a half-day field trip in Linz, followed by a Road Scholar-exclusive lecture about architecture, or a full-day field trip to the Christmas markets of Salzburg. Both field trips will be led by experts. Half-Day Linz Field Trip: We will set out on foot from the boat for an expert-led walk of Linz, Austria's third-largest city. A UNESCO City of Media Arts, Linz is one of the world’s most future orientated metropolises. In addition to visionary media arts and innovative technology, it offers a variety of historical and cultural highlights. Full-Day Salzburg Field Trip: We will travel by motorcoach to discover the beauty of Salzburg, birthplace of Mozart and filming backdrop for "The Sound of Music," with this full-day field trip to the renowned Austrian city. We’ll enjoy its traditional Christmas markets and sample holiday treats at Stiftskeller St. Peter.

Lunch: For those who stay in Linz, lunch is on board. For those who go to Salzburg, explore local fare on your own at the Christmas market.

Afternoon: For those of us who stayed in Linz, we will attend a Road Scholar-exclusive lecture about European architecture on board. For those of us who traveled to Salzburg, we’ll continue our full-day field trip and return to the boat before dinner.

Activity note: Up to 2 miles of walking for 2 hours on cobblestones and pavement. Getting on/off motorcoach, driving up to 1 hour total.

Morning: We will take in Road Scholar-exclusive lecture about the history of Central Europe on board.

Afternoon: We will have a short transfer by motorcoach to the historic center of Krems an der Donau, considered one of the most beautiful cities in Europe. First mentioned as a settlement in 995, the town was officially chartered with town rights in 1305 and is today known for production of Marillenschnaps apricot brandy. During an expert-led walk, we will stop at a chocolate confectioner’s shop to meet the owner, watch a demonstration, and enjoy a sweet treat. We’ll return to the boat for dinner.

Evening: We will board a motorcoach for the brief transfer from the boat to a character-filled venue that captures all the period elegance and beauty of an ancient religious retreat for a string ensemble performance.

Activity note: Up to 2 miles of walking over cobblestones and pavement.

Morning: Leaving the boat, we’ll experience the beautiful architecture of Bratislava on a panoramic half-hour drive to the massive hilltop castle that dominates the city. Afterwards, we’ll return to the city center with our expert for a walk through the charming squares, courtyards, and major landmarks of the Old Town. The historic town square sets the stage for Bratislava’s magical Christmas market, where we’ll have time to browse through the stalls, shop for handmade gifts, and perhaps savor some mulled wine and local delicacies before walking back to the boat.

Afternoon: We’ll attend a Road Scholar-exclusive lecture on board about life under communism. Afterwards, enjoy the boat’s amenities for the rest of the afternoon.

Activity note: Up to 2 miles of walking over cobblestones and pavement.

Morning: We will enjoy a sightseeing adventure through Budapest, Hungary's enchanting capital, and walk the cobbled lanes of its Castle District to see the Fisherman's Bastion. Then, we will immerse ourselves in the magic of the season at a Christmas market in the heart of the city.

Afternoon: On board, we will attend a Road Scholar-exclusive lecture about the European Union. Afterwards, enjoy some free time to prepare for departures tomorrow.

DAY
9
Program Concludes
In Flight
B

Breakfast: On board. This concludes our program.