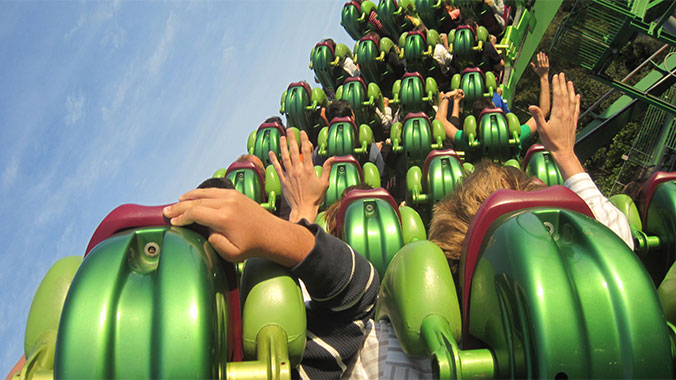 STEM Orlando: The Science Behind the Rides With Your Grandchild 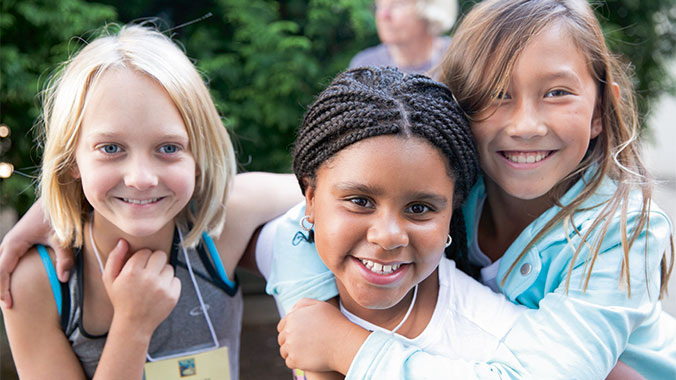 Wishlist Share Start
Science and excitement come together in Universal Studios as you and your grandchild thrill on park rides and then head behind the scenes to learn what makes the roller coasters run.
new
Activity Level

The thrill of a roller coaster doesn’t have to end when you step off the ride. Keep riding the wave of excitement as you take on science workshops with your grandchild at Universal Studios! Go behind the scenes to see what makes the Rip Ride Rockit run, find out how technology keeps the park operating and learn how movie makers re-create cinematic special effects on park rides! Then, throw your hands up and shriek with delight as your grandkid helps you feel like a kid again on some of your favorite rides in Universal Studios.
Activity Level
Let's Go!
Walking and standing up to three hours, riding theme park rides.

Afternoon: Program Registration: 3:00 – 5:00 p.m. After you have your room assignment, join us at the Road Scholar table in the lobby to register with the program staff and get your welcome packet containing the up-to-date schedule that reflects any changes, other important information, and to confirm the time and location of the Orientation session. If you arrive late, please ask for your packet when you check in. Remember to bring your name-tag (sent previously). Orientation. The Group Leader will greet everyone and lead introductions. We will review the up-to-date program schedule, discuss roles and responsibilities, logistics, safety guidelines, emergency procedures, and answer questions. This is a Road Scholar Grandparent program. Grandparents are responsible for their grandchildren at all times. If/when separate age group activities are conducted concurrently, program staff will supervise. The Universal theme park is very large, and divided into two sections: Universal Studios and Islands of AdventureTM. When we go to the park, we’ll take the hotel shuttle that runs all day. Our tickets allow us to spend as much time as we like in the park on Days 2, 3, and 5. We’ll also have vouchers for meals in the park. Periods in the daily schedule designated as “Free time” and “At leisure” offer opportunities to do what you like and make your experience even more meaningful and memorable according to your personal preferences. The Group Leader will be happy to offer suggestions. Program activities, schedules, personnel, and indicated distances or times may change due to local circumstances/conditions. In the event of changes, we will alert you as quickly as possible. Thank you for your understanding.

Dinner: At the hotel, we’ll have a welcome dinner with pizza plus juice and water; other beverages available for purchase.

Evening: This evening will be at leisure. Continue getting to know your fellow Road Scholars, settle in, and get a good night’s rest for the day ahead.

Activity note: Getting on/off a shuttle; driving less than 1/2 hour total to/from parks. Walking about 2 miles during morning group activities; paved pathways. Extent and duration of walking and other activities during free time according to personal choice.

Breakfast: At the hotel, we’ll have cafeteria-style meals with milk, juice, coffee, tea, water included. In order to take full advantage of the early entrance admission, today's breakfast will be shorter compared to other days.

Morning: Arriving by shuttle, we’ll take advantage of early entrance to the theme park to experience the parks and enjoy the rides before the lines get long. This will give us an advance look at everything before our workshops begin. You might choose to spend the morning with the group or strike out on your own to explore your own interests.

Lunch: In the park, meal vouchers will be provided for a lunch of your choice with a non-alcoholic beverage included; other beverages available for purchase.

Afternoon: We’ll take a break from the parks and engage in a LEGOTM Mindstorm-based STEM activity at the hotel with instructors from a local makerspace. During our workshop, we’ll build working robot models of theme-park rides and learn how the principles of physics and robotics apply to our favorite Universal StudiosTM Orlando attractions.

Dinner: Meal vouchers will be provided that are valid at a selection of locations both in the park and at Universal's CitywalkTM, each with a select menu of choices. Entree, side, and non-alcoholic beverage will be included at all locations; other beverages available for purchase.

Evening: At leisure. Park tickets are valid for the entire day. You may wish to return to the park to spend some more time enjoying the rides and attractions this evening.

Activity note: Getting on/off a motorcoach; driving less than 1/2 hour total to/from parks. Walking up to 2 miles; workshop up to 3 hours with periods of standing. Extent and duration of walking and other activities during free time according to personal choice.

Morning: Using Universal's resort shuttle, we'll head over to Universal StudiosTM for our first of three STEM-based workshops: TransformersTM ROLL Out. This morning, we'll engage in a hands-on course led by theme park instructors in rotational and translational motion as we experience the thrills of TRANSFORMERSTM: The Ride-3D. We’ll learn about the various types of motion, and how bodies move in 3-D space. In small groups using an iPad and an interactive app, we will apply our knowledge and design the sequence of movements a ride vehicle needs to synchronize with the animation in the attraction. We'll end our morning activity by experiencing TRANSFORMERSTM: The Ride-3D firsthand as we ride in EVAC, one of Optimus Prime’s transforming Freedom Fighters.

Lunch: In the parks, meal vouchers will be provided for a lunch from the vendor of your choice. Group Leaders will offer recommendations on their favorite spots.

Afternoon: Free time. This period of time has been set aside for your personal independent exploration to see and do what interests you most. Please refer to the list of Free Time Opportunities. The Group Leader will be happy to offer suggestions. You may want to explore the parks on your own or return to the hotel for a rest. Take a dip in one of the hotel's two swimming pools, float in the adjacent lazy river, or make a splash down the water slide.

Dinner: With meal vouchers. Group Leaders will organize a group meal at one of their favorite Universal CitywalkTM restaurants for those who are interested and will make recommendations should you choose to dine independently.

Activity note: Getting on/off a motorcoach; driving less than 1/2 hour total to/from parks. Walking up to 2 miles; workshop up to 3 hours; paved pathways. Extent and duration of walking and other activities during free time according to personal choice.

Morning: Using the resort shuttle, we'll head over to Islands of AdventureTM for the Kongtrol Panel Workshop. During this STEM-based workshop, we will learn the principles of motion and stability using the technology of Universal's exciting 3-D safari ride, Skull Island: Reign of KongTM. Using the ride's Kongtrol Panel app on iPads, we will learn how precise the state-of-the-art ride vehicle's programming must be, and reprogram the ride's commands to navigate rough, unpredictable terrain, and avoid collisions. Afterward, we’ll experience the technology firsthand with a thrilling ride in the vehicles.

Lunch: Meal vouchers in the park.

Afternoon: Taking a break from the parks, we’ll return to the hotel to engage in another hands-on LEGOTM-based STEM activity with instructors from a local makerspace. We’ll check out different models and focus on the physics at play in each.

Dinner: This meal has been excluded from the program cost and is on your own to have what you like. The Group Leader will be happy to offer suggestions.

Activity note: Getting on/off a motorcoach; driving less than 1/2 hour total to/from parks. Walking up to 2 miles; workshop up to 3 hours with periods of standing; paved pathways. Extent and duration of walking and other activities during free time according to personal choice.

Morning: Using Universal's resort shuttle we'll head back to Universal StudiosTM for our final STEM workshop, Hollywood Rip Ride RockitTM Science, a hands-on physics activity featuring one of Universal's most thrilling rollercoasters. With park instructors, we'll learn about forces and interactions as we work in small groups using iPad and an interactive app to collect data and measure speed along Hollywood Rip Ride RockitTM. We’ll also learn about the ride’s transfer of energy and talk more about physical principles like the Law of Conservation of Energy. At the end of the activity, we will climb aboard Hollywood Rip Ride RockitTM to see how the science translates into thrills! Returning to the hotel, we’ll get ready for a pool party.

Lunch: At the hotel pool pavilion, we’ll have a selection of sandwiches and sides, plus juice and water.

Afternoon: Pool Party! Continue the fun at the pool after lunch, relaxing with new friends while we enjoy our last afternoon together. If you like, you can use your ticket to return to the park this afternoon instead because our tickets allow us into the whole theme park all day.

Evening: Blue Man Group. It’s three guys with their heads painted blue who perform an indescribable mix of comedy, theater, light, sound, and music mixed with technology that’s different from anything you’ve ever seen before. More than 35 million people worldwide have attended a Blue Man Group show. It lasts about an hour and 45 minutes. Because the performers work with some materials that splash and can make a mess (they say it’s washable), wear clothing you don’t mind getting wet if you’re close to the stage. After the performance, we'll meet with Blue Man Group technical staff who will teach us how they use LED lighting, audio, and video technology to produce the sights and sounds of the show each night. We’ll then return to the hotel. Prepare for check-out and departures in the morning.

Breakfast: At the hotel. This concludes our program.