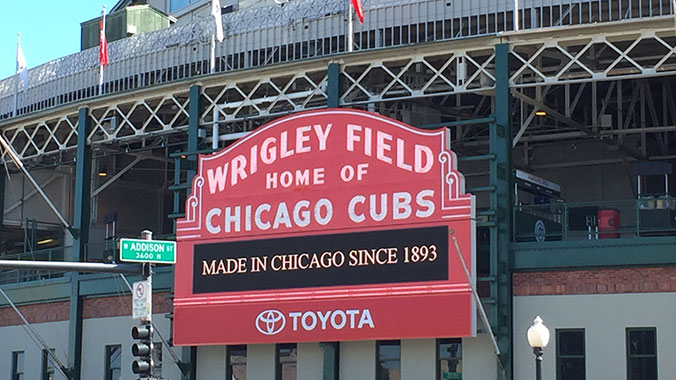 Take Me Out to the Ball Game: Chicago With Your Grandchild

Wishlist Share Start
Take your grandchild out to the ball game in Chicago as you both learn about the local baseball history, practice your skills and watch three exciting baseball games. What a homerun!
Rating (5)
Activity Level

Hit a home run this summer and take your grandchild to experience America’s greatest pastime in one of America’s greatest cities. Grab your gloves and best baseball caps to meet the pros as they spill their training secrets. Down on the diamond, watch the players hit homers during two major league games while you both root, root, root for your favorite team. Wind up in the Windy City during games of catch and learn about Chicago’s crazy baseball history, like the mysterious “Curse of the Billy Goat.” At Wrigley Field, grab ‘em some peanuts and Cracker Jacks for a grand slam adventure they’ll never forget.
Activity Level
Keep the Pace
Walking approximately 1 to 2 miles a day; standing during field trips and baseball activities for about 1 hour. Climbing steps at ballpark. Getting on/off a motorcoach.

Due to the MLB ticket policy, we cannot reimburse participants for a cancelled game. We will do our best to provide an alternate activity and reschedule if possible.
Featured Expert
All Experts

George Castle
George Castle turned an avocation into a vocation. George grew up in the cheap seats - Wrigley Field's right-field bleachers and old Comiskey Park's grandstands — when admission was $1.50 or less. George turned that knowledge into a 40-year career covering baseball for a multi-media collection of newspapers, magazines, websites and 17 baseball books. George also hosted and produced "Diamond Gems," his own nationally-syndicated weekly baseball radio show, from 1994 to 2010. He has spoken on baseball history at dozens of Chicago-area programs since 2003.

Paula Miller
View biography
<%= Bio %>
Suggested Reading List
View 4 books
When Chicago Ruled Baseball: The Cubs-White Sox World Series of 1906
by Bernard A. Weisberger
Historian Bernard A. Weisberger explores the 1906 World Series, when the Cubs squared off against the White Sox in a historic game for the United States and the City of Chicago.
Legends: The Best Players, Games, and Teams in Baseball
by Howard Bryant
This book for young readers delves into important moments throughout the history of baseball in the United States with stories, photos, lists and timelines.
The Million To One Team: Why the Chicago Cubs Have Not Won the Pennant since 1945
by George Castle
2016's events have overtaken the vintage-2000 book's title, but Castle's look at Cubs management and ownership's failure to build a consistent contender is still considered one of the best resources on the Chicago Cubs. Castle profiles the Wrigley family and Tribune Company executives and their hired overseers at the ballpark to explain how two well-run, affluent national companies could not duplicate their success in baseball.
The 1969 Cubs: Long Remembered, Never Forgotten
by Fergie Jenkins, George Castle
Written by former Cubs reporter George Castle and Hall of Famer Fergie Jenkins, this book is a nostalgic look-back at probably the most popular team in Cubs history other than the 2016 world champs. Stocked with three other Hall of Famers in Ernie Banks, Billy Williams and Ron Santo, the '69 Cubs turned on Chicago like never before with their "Cub Power" and colorful play. They connected with fans in a never-duplicated manner. The '69 Cubs dominated the NL East in first place for five months before the Amazin' Mets overtook them in September with a once-a-century stretch run. The '69 Cubs lost the battle, but won the war. They established the modern Cubs franchise where crowds pack Wrigley Field for a Wednesday in July and the Cubs are the city's No. 1 baseball love.
Start Enrolling

Afternoon: Program Registration. After you have your room assignment, join us at the Road Scholar table in the lobby to register with the program staff and get your welcome packet containing the up-to-date schedule that reflects any changes, other important information, and to confirm the time and location of the Orientation session. Please remember to bring your name tag with you to the program. If your arrival is delayed, please ask for your packet when you check in. Orientation. The Group Leader will greet everyone and lead introductions. We will review the schedule and any changes, discuss roles and responsibilities, logistics, safety guidelines, emergency procedures, and answer questions. This is a Road Scholar Grandparent program. Grandparents are responsible for their grandchildren. If/when separate age group activities are conducted concurrently, program staff will supervise. Children are never to be left unsupervised. We will be getting around Chicago mostly via the public transportation system that involves stepping on/off subway cars, climbing up/down flights of stairs at some stations without elevators, and walking on city streets and sidewalks. Some activities depend on local conditions at the time of the program and could be modified or rescheduled accordingly. Periods in the daily schedule designated as “Free time” and “At leisure” offer opportunities to do what you like and make your experience even more meaningful and memorable according to your personal preferences. The Group Leader will be happy to offer suggestions. Program activities, schedules, personnel, and indicated distances or times may change due to local circumstances/conditions. In the event of changes, we will alert you as quickly as possible. Thank you for your understanding.

Dinner: At the hotel, we’ll have a buffet dinner with soft drinks, coffee, tea, water.

Morning: We’ll be joined by a local expert who will tell us about the local history of America's favorite pastime. The first recorded baseball game played here was in 1851! We’ll also learn about the rivalry between Chicago’s two major league teams: the Cubs (National League) on the North Side and the White Sox (American League) on the South Side. As Ron Kittle, a former White Sox outfielder put it, “There’s a huge difference in the fan bases. Cubs fans have iPhones and send text messages during the games. White Sox fans watch the games.” By the end of the program, we’ll be able to decide if it’s true. We will hop aboard a motorcoach and ride to our first stop of the day, Guaranteed Rate Field, home of the White Sox. A staff member will give us a behind-the-scenes look of the park including the home dugout, the press box, the field, the suites, and the Stadium Club. Once known as Comiskey Park for famed player-manager-owner Charles Comiskey, it has gone through different names as corporate sponsorship changed. The new ballpark opened in 1991 across the street from the old stadium that also bore the name Comiskey Park.

Lunch: Lunch at a local restaurant

Afternoon: We’ll then head to the nearby Chicago Sports Museum for a field trip. It has been called one of the “coolest, weirdest, and best” museums in the city. In addition to an impressive collection of sports memorabilia and a hall of local sports legends, the museum has interactive, high-tech exhibits including skill challenges and simulated experiences. After, we’ll take the motorcoach to Lincoln Park where coaches from Lincoln Park Baseball Academy will lead a baseball clinic to practice our skills. We’ll then divide up into teams and play a scrimmage game.

Morning: This morning, we’ll board a motorcoach for a city field trip led by a local expert. We’ll get a feeling for Chicago's bold character through its beautiful landmarks and fascinating backstories about history including the Great Chicago Fire, world-famous architecture, and contemporary life. We’ll walk around Millennium Park and see the Cloud Gate sculpture — known as The Bean. Our motor coach will drop us off at Wrigley Field, home of the Chicago Cubs!

Dinner: We will have a pizza party back at our hotel.

Evening: Enjoy a hands on activity with your fellow Road Scholars.

Morning: We will set out on the motorcoach for a field trip to the iconic Willis Tower, also known as Sears Tower, and its Skydeck at a height of 1,353 feet in the air! Everyone who likes will have a chance to step out on the glass enclosed Skydeck Ledge that extends a little over four feet out. We’ll then hop aboard the motorcoach and ride to Geneva, Illinois, where the Kane County Cougars play at Northwestern Medicine Field. A few years ago, the Cougars made history by becoming the first Class-A team in Minor League Baseball history to welcome 11 million fans. More than 170 former Cougars have gone on to the majors.

Lunch: Indulge in typical ballpark fare with a lunch from the concessions stand.

Afternoon: Enjoy an afternoon of baseball at Northwestern Medicine Field. Then, return to the hotel via motorcoach.

Dinner: Tonight we will have dinner together at a local restaurant near the hotel.

Morning: Aboard our motorcoach, we’ll head out on our first field trip of the day to Wrigley Field. This historic ballpark was built in 1914, second-oldest in the majors, at a cost of about $250,000 — more than $62,000,000 in today’s money. It was extensively renovated in 2017-2018. A ballpark staff member will take us behind the scenes for a close-up look at one of America's best-loved ballparks. We will be able to go on the field and — depending on whether it’s a game day — see the seating bowl, press box, bleachers, visitors’ clubhouse, and Cubs dugout. At the end of our field trip, we’ll go back to the hotel.

Lunch: This meal has been excluded from the program cost and is on your own to enjoy what you like. The Group Leader will be happy to offer suggestions.

Afternoon: Free time. This block of time has been set aside for your personal independent exploration to see and do what interests you most. Please refer to the list of Free Time Opportunities. The Group Leader will be happy to offer suggestions. Late afternoon, we will regroup at the hotel and take the train to Wrigley Field.

Dinner: At the ballpark.

Our 4th Road Scholar program! If you love baseball, this is the program for you. If you have a granddaughter, be aware they may be the only female child on the trip. This was the "maiden voyage" so hopefully the program will expand to include many more interested girls. She adapted and enjoyed all the program had to offer.