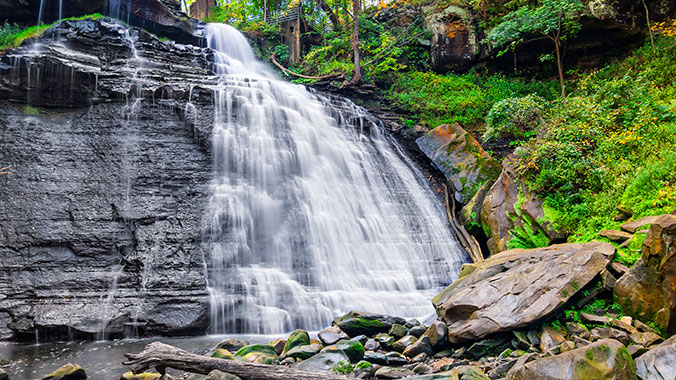 Back to Its Natural State: Ohio’s Cuyahoga Valley National Park 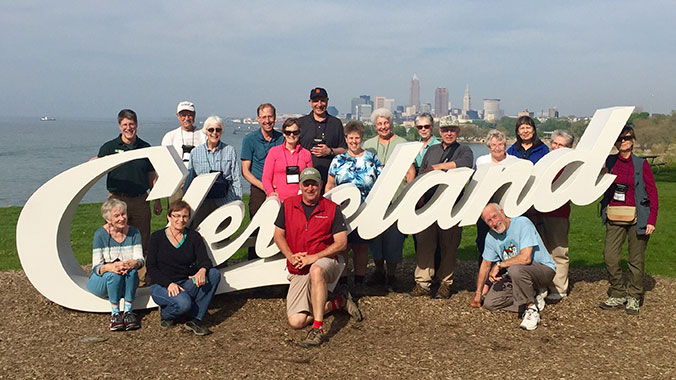 With much of its 20,000 acres donated by the public or reclaimed from the rural landscape, Cuyahoga Valley is unique among National Parks. Come witness how one-time farmland became known as Beaver Marsh and how a sports stadium became a bird-watchers’ paradise. Explore the park’s natural wonders alongside local experts as you hike to the top of Brandywine Falls, discover 300-million-year-old rock formations and learn about travel and transportation via horse-drawn boats along the Ohio and Erie Canal. Plus, discover the region’s cultural story on a scenic excursion to Akron, where you’ll learn about historic architecture, homes and gardens.
Activity Level
Outdoor: No Sweat
Hiking and walking more than 2 miles daily over easy and moderate terrain. Stairs; getting on/off motor coach, train and canal boat.

Jim Baron
Born and raised in Cleveland, Jim attended Ohio Wesleyan University and graduated with a degree in Sociology. A hobby of picture taking turned into a career in photography — he eventually started his own commercial photography business in Cleveland. He currently owns and works for Baron Photography and The Image Finders, Inc. His passion for photography has helped inspire him to explore the Cuyahoga Valley National Park various times going back thirty years before it was even a national park.

Afternoon: Program Registration: 3:00-4:00 p.m. After you have your room assignment, come over to the Road Scholar table to register with the program staff and get your welcome packet containing up-to-date schedule that reflects any last-minute changes, and other important information. If you arrive late, please ask for your packet when you check in. Orientation: 4:00 p.m. The Group Leader will greet everyone and lead introductions. We will review the up-to-date program schedule, discuss roles and responsibilities, logistics, safety guidelines, emergency procedures, and answer questions. Program activities, schedules, personnel, and indicated distances or times may change due to local circumstances/conditions. In the event of changes, we will alert you as quickly as possible. Thank you for your understanding. At 5:00 p.m., we'll be joined by a local expert who will discuss topics including the National Park System; Cuyahoga Valley National Park; the Cleveland/area park system, also known as the Emerald Necklace; and the history of the Ohio and Erie Canal.

Evening: At leisure. Continue getting to know your fellow Road Scholar participants, settle in, and get a good night's rest for the day ahead.

Activity note: Walking over 2 miles throughout the day over uneven terrain down into gorge. Climbing 75 stairs at Brandywine Falls. Walking stick strongly recommended.

Morning: We'll board the motorcoach for a full-day field trip to Cuyahoga Valley National Park. The area that now comprises Cuyahoga Valley National Park (CVNP) has been a haven for urban dwellers since the 1870s. The cities of Cleveland and Akron established protective park districts in the early 20th century, but concerns have developed over the decades in regards to urban sprawl invading these pristine lands. Concerned citizens generated a movement that culminated in creation of the Cuyahoga Valley National Recreation Area in 1974, and designated as Ohio's only National Park in 2000. We'll explore several key areas of CVNP. Brandywine Falls, a 65-foot-high falls, is the second highest falls in Ohio and one of the most popular attractions in the park. A boardwalk will take us to upper and lower observation platforms which overlook the falls head-on. We will also take a 1.5-mile hike around the Brandywine Gorge Trail starting from the upper observation platform. On this trail, we'll explore the deep gorge cut by Brandywine Falls. The historic Boston Store Visitor Center was constructed in 1836 along the Ohio & Erie Canal. Settlers in the valley bought and sold goods with merchants traveling by canal boat. We'll have a ranger present while we view exhibits that tell the story of canal boat building in the valley.

Afternoon: We'll continue exploring the CVNP. The cool, moist hemlock and yellow birch forests along the towering sandstone Ritchie Ledges benefit from a microenvironment, which has formed over the 300-million-year-old rock formations. Enormous sections of the orange and yellow rock have broken away and will make you feel as if you are walking in a giant's rock garden. At Beaver Marsh, look for beavers, otters, muskrats, and waterfowl along the wetland boardwalk. The Beaver Marsh is designated as an Ohio Watchable Wildlife Area, so bring a camera!

Dinner: At a local restaurant near the hotel, we'll enjoy a plated dinner. Coffee, tea, and water included.

Evening: Upon our return to the hotel, the evening will be at leisure.

Activity note: Getting on/off a motorcoach. Walking 2 miles throughout the day. Standing and uneven terrain at farm. Getting on/off a canal boat (8 steps); location of boarding depends on weather.

Morning: We'll transfer by motorcoach to the Cuyahoga Valley Countryside Conservancy for a presentation led by a staff member on the Countryside Initiative farm program. The conservancy is a private, nonprofit organization partnering with the CVNP to develop and manage a program — the Countryside Initiative — that helps to preserve and protect the rural landscape through farming stewardship. It has become a model for public-private sustainable land use. We will then go on a walking field trip through one of the participating farms.

Lunch: In the Park, we will enjoy a plated meal at Sarah's Vineyard, a member of the Countryside Conservancy. Beverages include coffee, tea, water.

Afternoon: After lunch, we will head to the city of Canal Fulton and learn about a canal boat, the St. Helena III. This fully operational replica of an original canal boat, drawn by a team of Percheron horses, glides through a renovated portion of the Ohio & Erie Canal. We'll visit the Canalway Center for a video presentation and an hour-long ride on the canal boat.

Morning: Via motorcoach, we will embark on a day-long exploration of the Cleveland Metroparks' Emerald Necklace, and will be accompanied by Metroparks' representative who will discuss how the award-winning park system fits into the context of Cleveland's natural, historical, and social history. We will visit the Brecksville Nature Center and the Look About Lodge this morning.

Lunch: At Look About Lodge, we'll enjoy a boxed lunch, including your choice of sandwich along with chips, a cookie, and bottled water.

Afternoon: After lunch, we will transfer to the Rocky River Nature Center for an instructed exploration and presentation. From the observation deck at the visitor center, we'll view the 360-million-year-old shale cliff overhanging the river.

Evening: Upon our return to the hotel, the evening is at leisure.

Activity note: Getting on/off a motorcoach. Getting on/off a train. Walking up to 2 miles throughout the day. Accessibility at Stan Hywet Hall limited to first floor. Extent and duration of independent exploration in the afternoon according to personal choice. Hiking about 0.5 miles on easy trail; crossing a suspension bridge 45' over a ravine.

Morning: After reaching Rockside Station by motorcoach, we will ride the Cuyahoga Valley Scenic Railroad to Akron. From there, we'll take the motorcoach to the former estate of Goodyear Tire & Rubber Company co-founder F. A. Seiberling, Stan Hywet Hall & Gardens. (Stan Hywet is Old English for “stone quarry,” the most prominent natural feature at the time Seiberling bought the property.) This is the sixth largest historic home open to the public in the country. We'll explore the manor house led by an expert, and see collections and furnishings that are original to the estate.

Lunch: We'll enjoy a boxed lunch with a choice of sandwich, including chips, a cookie, and a bottle of water.

Afternoon: We'll take this opportunity for personal independent exploration at Stan Hywet to see two of the exceptional appurtenances, the Gate Lodge and Corbin Conservatory and Gardens. The Gate Lodge is a two-story house in Tudor Revival style with a thatch wood shingle roof intended to resemble those of rural England centuries ago. It's also famous for being the birthplace of the Alcoholics Anonymous program. The Seiberlings grew produce and plant materials in the Corbin Conservatory, constructed with 4,322 panes of glass. The structure we see today is a recent replica. We will then make our way to the F.A. Seiberling Nature Realm for a stop at the Visitors Center and a short hike. This park is part of the Summit Metro Parks, the second oldest park district in Ohio.

Dinner: At a popular restaurant, we'll enjoy a farewell dinner as we share our favorite experiences with new Road Scholar friends. Coffee, tea, and water included.

Evening: At leisure. Prepare for check-out and departure in the morning.

Morning: If you are returning home, safe travels. If you are staying on independently, have a wonderful time. If you are transferring to another Road Scholar program, detailed instructions are included in your Information Packet for that program. We hope you enjoy Road Scholar learning adventures and look forward to having you on rewarding programs in the future. Don't forget to join our Facebook page and follow us on Instagram. Best wishes for all your journeys!

Very interesting program. There were a lot of different activities. Our group leader was very helpful and supportive to our learning experience. The park rangers were wonderful.

What a jewel the Cuyahoga Valley National Park is! So glad we learned about the Park and the MetroParks in the Cleveland area.

Although we live only a few hours away, we had never been in the Cuyahoga Valley National Park. We enjoyed the experience. Especially attractive was that every day was different. On some days we hiked much; other days had a train ride and a canal boat excursion and toured a mansion. All of the local guides were terrific and the leader was very personable.

Who knew that the area south of Cleveland could be so lovely! Full of history and natural beauty.

This was our first Road Scholar trip but it certainly won't be our last!!!! Loved everything about it!!

I thoroughly enjoyed thie Cuyahoga National Park program. The scenic beauty was often breathtaking. The leader was extremely knowledgeable, friendly, and funny! Every day was packed with interesting activities. Loved the train ride, hikes and all the scenic beauty.

Mt Pleasant, MI
This reviewer did not give a star rating. a year ago

Who knew Ohio and the Cleveland area had such a pristine public national and Metro park system. Outstanding diversity of the daily itinerary, our favorite being hiking through the Ritchie Ledges. The leadership, knowledge and personality of guide Jim Baron makes this trip one for your bucket list. And I don't know that on any other trip you would find such an enthusiastic park guide/musician such as Foster Brown. You're overlooking the Henry Church Rock area and he straps on his guitar and sings an original song about Church. He later also performed at the final dinner. Remarkable talent. The Double Tree Inn by Hilton was a good central location and the daily bus service to the various sites was first rate. Except for one meal (dinner at the London Pickle Works, ugh! for service), the restaurant and food choices were very good, especially the meals at Austin's Wood Fire Grill and at Merwin's Wharf. This was our 8th RS trip and is highly recommended for anyone desiring to be outdoors in one of the nation's beautiful unsung park systems.