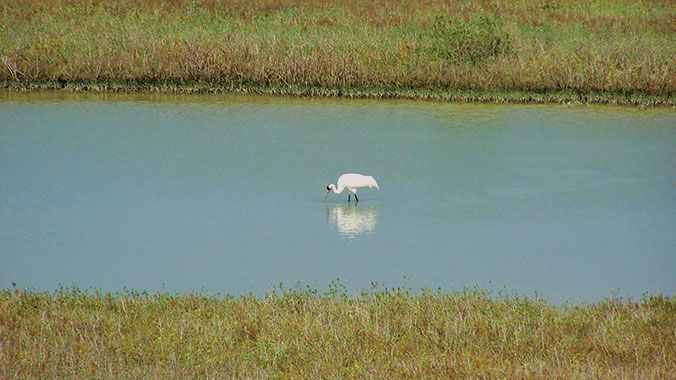 South Texas is the only spot in the United States where the only natural migrating flock of endangered Whooping Cranes can be viewed at close range, and the Port Aransas Chamber of Commerce celebrates this astonishing natural wonder with an annual festival each February. Cruise along the shores of the Aransas National Wildlife Refuge to observe the cranes in a winter habitat shared by a diverse group of wildlife. Hear about current efforts to protect and rehabilitate cranes and other birds.

Afternoon: Program Registration begins at 4:30 p.m. in the hotel meeting room on the ground floor. Road Scholar staff will provide you with your welcome packet containing your name-tag, up-to-date schedule that reflects any last-minute changes, other important information. If you arrive late, please ask for your packet when you check in. Orientation. The Group Leader will greet everyone and lead introductions. We will review the up-to-date program schedule, discuss roles and responsibilities, logistics, safety guidelines, emergency procedures, and answer questions. Periods in the schedule labeled “Free Time” and “At Leisure” offer opportunities to make the program more meaningful and memorable while going out to explore on your own, engaging in available activities independently, making new friends among fellow Road Scholars, or simply relaxing. The Group Leader will always be happy to offer suggestions. Program activities, schedules, personnel, and indicated distances or times may change due to local circumstances/conditions. In the event of changes, we will alert you as quickly as possible. Thank you for your understanding.

Evening: Free Time. Take this opportunity for personal independent exploration to see and do what interests you most. Please refer to the list of Free Time Opportunities. The Group Leader will be happy to offer suggestions.

Morning: We will start our week by taking a field trip to one of the birding sites on the Great Texas Coastal Birding Trail. The coastal flats is a great location to spot Herons, White and Brown Pelicans, Shorebirds and the agile Reddish Egret. This active forager is often seen running, jumping, and spinning in its pursuit of fish.

Afternoon: We will continue birding along the beach and bays looking for shorebirds and other birds..

Evening: We will enjoy a film called “The Flight of the Whooping Crane,” a great source of background information prior to our cruise tomorrow.

Morning: Early departure for a one hour drive to Fulton Harbor. Our 3.5 hour cruise aboard the M/V Skimmer begins as we sail across Aransas Bay and along the shores of the Aransas Refuge watching for Whooping Cranes and other birds and wildlife - we may even see some Bottlenose Dolphins swimming alongside the vessel.

Lunch: Picnic lunch at the Rockport Beach Pavilion while watching the gulls and terns forage on the waters edge.

Afternoon: Birding will continue on our way back to the hotel where we will have an up-to-date status presentation on the Whooping Cranes by a representative from the Texas Whooping Crane Foundation

Evening: At leisure. Continue enjoying the company of new Road Scholar friends with informal activities such as card games, a movie, or sharing your favorite experiences of the day.

Morning: Continuing on the Great Texas Coastal Birding Trail we will stop at sites along the Oso Bay along a collection of boardwalks and dirt trails. Few tidal flats along the central coast can boast of a birdlife spectacle equal to the Oso Bay area. Watch for Piping and Snowy Plovers, and abundance of Waterfowl and flocks of Roseate Spoonbills to name a few along the mudflats and wetlands

Afternoon: Birding continues along the shores of Oso Bay. Followed by a short drive to the Animal Rehabilitation Keep on the University campus for a guided tour. See how experts care for endangered birds and turtles before they are successfully released back to nature.

Evening: At leisure. Continue enjoying the company of new Road Scholar friends with informal activities such as card games, a movie, or sharing your favorite experiences of the day.

Morning: Take a 40 minute ride to Hazel Bazemore Park renowned for its hawk migration in the fall. Other birds to watch out for on this walking/driving nature trail is the Olive Sparrow, Great Kiskadee, Green Jay, Groove-billed Ani and Long-billed Thrasher.

Afternoon: Depart on an afternoon birding hayride on the Nueces Delta Preserve. A variety of habitats represent an unique mosaic of highly productive wetlands, open water, islands, prairie, and river and bay shorelines. An oasis for migrating waterfowl, hawks, shorebirds and much more.

Evening: Attend a University of Texas Public Lecture in Port Aransas which launches the opening of the Whooping Crane Festival. Return to the hotel. We will wind up the weeks program and say farewell to our new-found friends.

Breakfast: Hotel buffet. This concludes our program. We hope you enjoy Road Scholar learning adventures and look forward to having you on rewarding programs in the future. Please join our Facebook page and share photos of your program. Visit us at www.facebook.com/rsadventures. Best wishes for all your journeys!

Terrific week with enthusiastic leaders Linda and Claudia and additional experts at each location to enhance our knowledge. Highlight was learning the remarkable story of whooping crane recovery, the work of the ICF and an enjoyable cruise to see them up close for great photographic opportunities. Highly recommended excursion.

I have been on over 30 Road Scholar trips over the years, and this one is absolutely first-class! Bird watching in not my hobby; however, I really wanted to see whooping cranes after watching PBS programs that involved using ultra-lite aircraft to teach juveniles to migrate. The boat trip into the Port Aransas National Wildlife Refuge provided sightings of several adult and juvenile whooping cranes, but that was only the beginning of my introduction to the birds of the area. During the next several days the skillful and enthusiastic leader enabled a novice like me as well as the more experienced bird watchers, to see and appreciate over 90 different species of birds in a variety of habitats.